Courtesy of Ward Sutton
One of a series of artworks Ward Sutton offered as a free download in poster and yard-sign formats. Available at suttonimpactstudio.com.
Political cartoonist Ward Sutton, a relative newcomer to Colorado, might have come here to get away from it all, but his handiwork enjoys a national reach, appearing in such publications as the Boston Globe and the New Yorker and, as drawn by his alter-ego Kelly, The Onion. The Herblock Prize winner also diversifies as an illustrator, creating high-profile band posters, animation for HBO and Comedy Central, and even face masks sold on Etsy. Through it all, his caricatures are spot-on, and his humor remains even-handed and ridiculously funny.

As a freelance artist, Sutton sees a world of possibilities for himself in the future. Find out where he’s been and where he might be headed as he tackles the Colorado Creatives questionnaire. 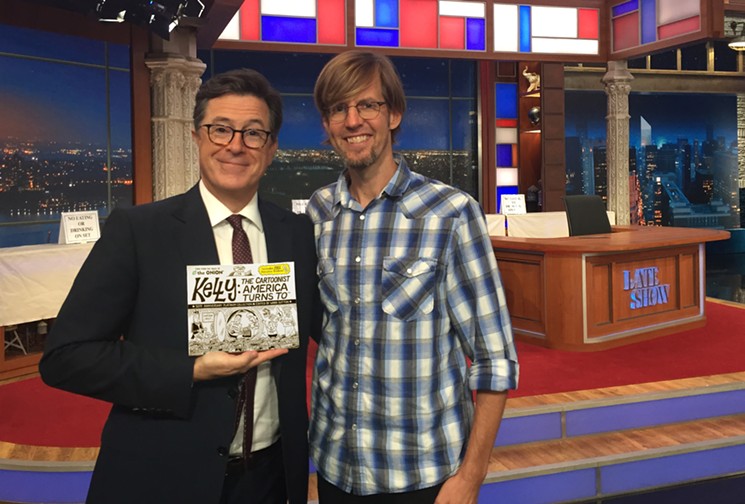 Stephen Colbert and Ward Sutton.
Courtesy of Ward Sutton
Westword: What (or who) is your creative muse?

Ward Sutton: I work mainly as a political cartoonist, so my muse tends to be all that is wrong with the world. I just read a quote today from Kurt Tucholsky, a writer from 1930s Germany, that sums it up nicely: "A satirist is an offended idealist."

Stephen Colbert, Maureen Dowd and Barack Obama. I first met Stephen back in 1999, when I was hired to design the animated opening to his Comedy Central show Strangers With Candy. He has the fastest wit I've ever experienced, and is genuinely an incredibly warm, friendly human being. I have yet to meet Maureen, but I've done work for the New York Times and would love to hear about her experience there (not to mention a sampling of the behind-the-political-scenes stories she's amassed throughout her career). As for Barack (can I call him "Barack"? If he's my party guest, sure!), the closest I've ever been to him was the 2009 Inauguration, which I was covering as a cartoonist-reporter. With this threesome, the conversation would be riveting! 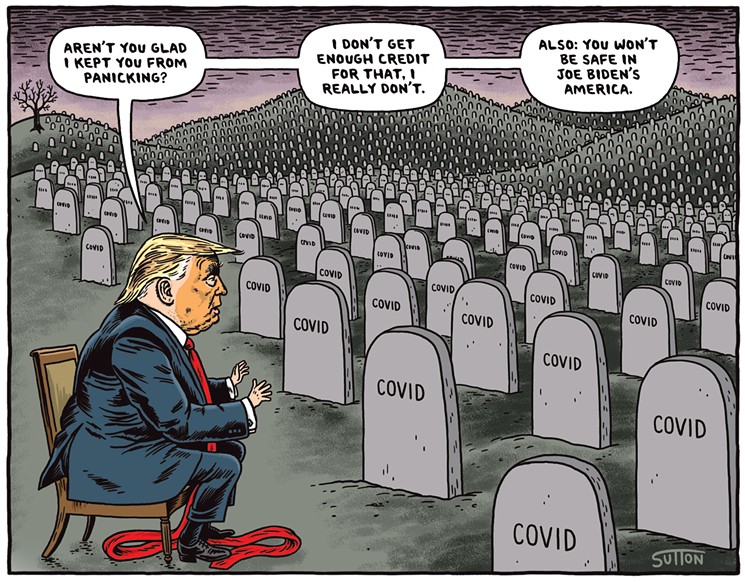 Satire, Sutton-style, for the Boston Globe.
Courtesy of Ward Sutton
What made you take up cartooning in the first place?

In grade school, I drew a caricature of then-President Jimmy Carter. My teacher put it up in a display case, and I got loads of positive feedback from fellow students. I thought, "This is fun." Then a friend's mom asked me to use my drawing skill and make cartoons with statements about grade-school life. I did so, and she got them published in our community paper. I was really lucky to get a lot of encouragement from an early age.

Where is the fine line between derogatory humor and satire?

This is something I've been thinking about a lot recently. As a liberal commentator, I spent a long time incensed by the people who support Trump. I kept thinking that if Trump were to lose, I'd really stick it to them in my post-election cartoons. But now that Biden has won, that notion doesn't feel right. I enjoy being blunt and even brutal with my satire — but I try to do it with insight and to make a point. I don't like to make fun of people just to be mean. 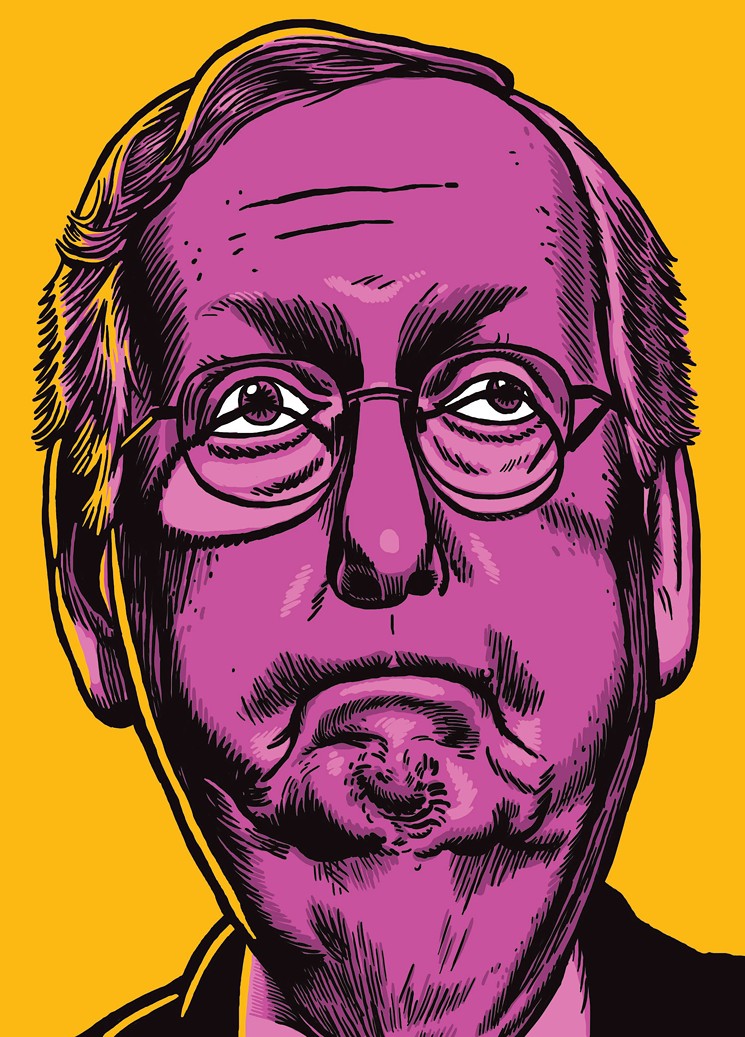 Ward Sutton's full-page illustration of Mitch McConnell for the New Yorker.
Courtesy of Ward Sutton
Who are your role models as a political cartoonist?

The cartoonist Herblock worked from WW2 until the era of Clinton, mainly for the Washington Post. He was unflinching, and much of his work still resonates as though it was created today. He was fully dedicated to his craft and lived in a now-distant era where presidents would invite cartoonists to the White House. When he died, he surprised even his two assistants by leaving $50 million to start a foundation to support and celebrate the art of political cartooning. The assistants now run the foundation, which awards the Herblock Prize annually. I was incredibly honored to be the recipient of the Herblock Prize in 2018.

Colorado, love it or leave it? What keeps you here — or makes you want to leave?

My family and I moved to Fort Collins just four years ago, and we love it. After roughly twenty years in New York City, my wife and I were ready to be closer to nature. The state is beautiful but also has arts and culture — it’s the perfect balance for this chapter of our lives. Plus we've been thrilled with how progressive the politics have become during our time here! If I could have one wish granted, it would be for light rail along the Front Range. 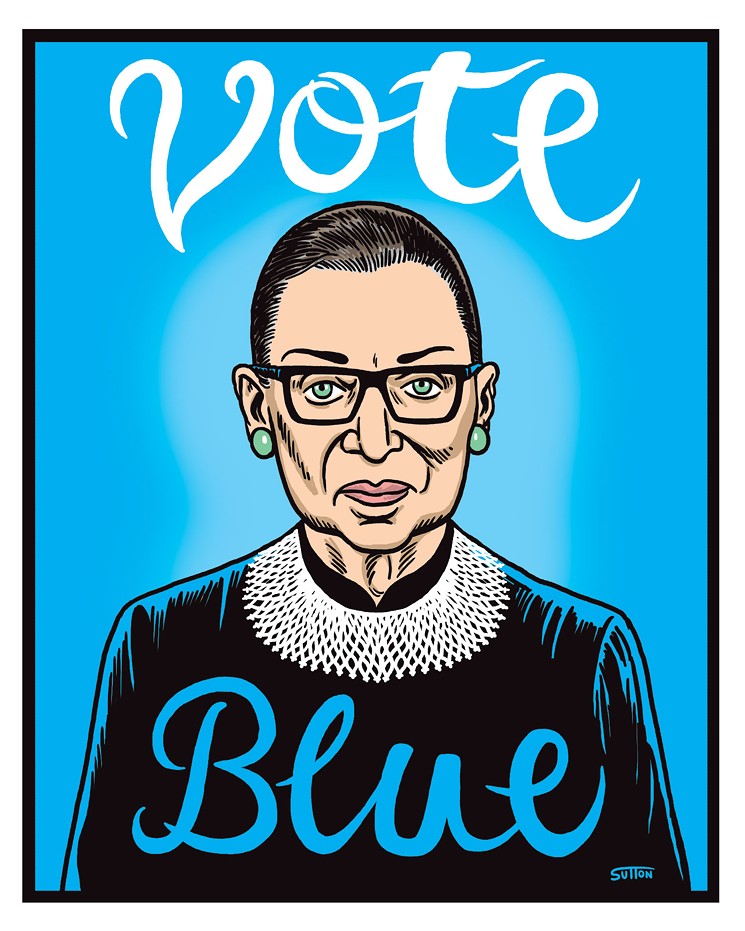 Another downloadable political poster by Ward Sutton.
Courtesy of Ward Sutton
Who is your favorite Colorado Creative?

Because I am so new to the area, I have not yet really met a lot of artists personally, but I really enjoy wandering the RiNo area of Denver and taking in all the murals and public artwork. I love the vibe there. In Fort Collins, there's a cool screen-printing shop called Pine. They've got a ton of energy and are producing fantastic work. I created a lot of concert posters for musicians like Phish, Pearl Jam and Beck back in the 1990s, and I produced one of my first posters in many years with Pine recently. I hope to collaborate with them more.

What's on your agenda now and in the coming year?

I recently realized that this year marks my thirtieth anniversary as a professional cartoonist. I know I'll be continuing that work, even as the political landscape shifts. I also have a semi-secret second career as the man behind Kelly, the fake editorial cartoonist for The Onion. Kelly, a crackpot, hack cartoonist whose ideas are always wrong, debuted in 2006 and is a labor of love. I also work as an illustrator, and in 2020 I accomplished one of my all-time goals: to create a full-page illustration in the New Yorker (to illustrate a cover remains a dream of mine). Working freelance means every job is new, and I'm entering 2021 open to all possibilities! 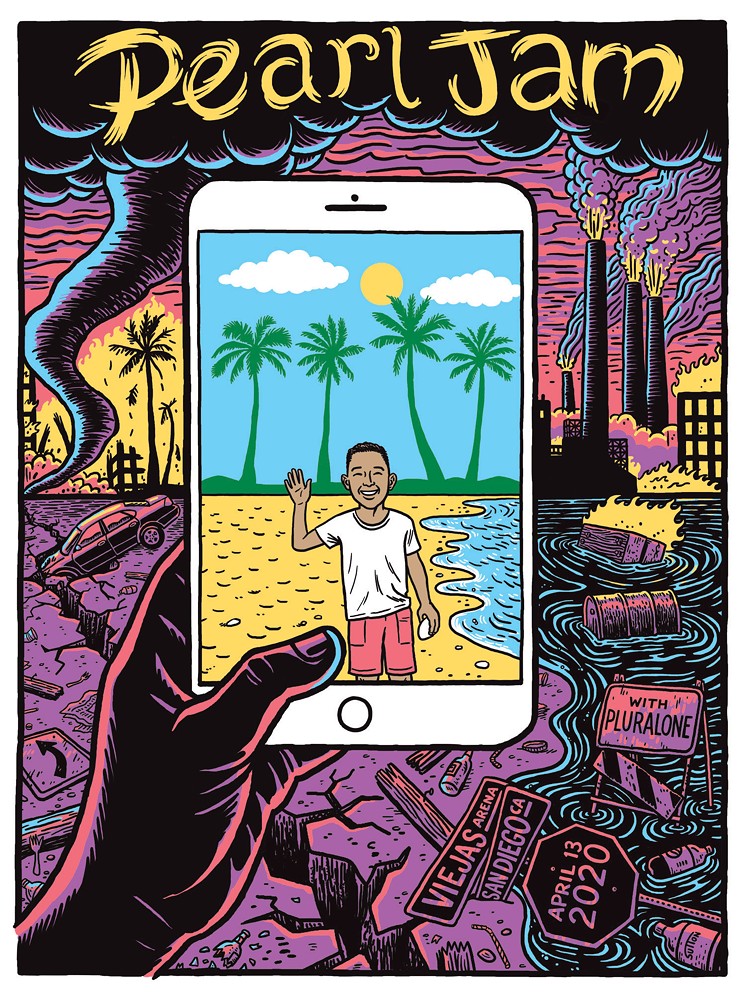 Sutton's recent poster for Pearl Jam.
Courtesy of Ward Sutton
Who do you think will (or should) get noticed in the local arts community in the coming year?

Again, as I'm so new to the area, I'm still exploring and learning about the different arts communities in Colorado. I'm grateful this is a place that values the arts, and I'm as interested and excited as anyone to see who does get noticed in the coming year!

Learn more about Ward Sutton and follow his work online.