Ellen Jaskol
Jami Duffy is the executive director of Youth on Record.

“We’re in The Hunger Games, performing for the Capitol.”

That’s how Jami Duffy, executive director of Youth on Record, describes how she and fellow nonprofit leaders relate to foundations. When they're not filling out grant applications and reports, she and her colleagues are mandated to shmooze at time-gobbling luncheons, trainings and retreats, where they share skills before competing against each other for money. Then, too often, foundations throw up pointless obstacles that they must dance around, distracting them from their core work. Every now and then a little parachute floats into the arena, but it's rarely enough to save the day.

The power imbalance is destructive during normal times, she notes. But during a pandemic, it's making many nonprofit leaders consider quitting.

The organizations that excel at getting funds are masters of what Tatiana Hernandez, a seasoned leader in arts philanthropy and the new CEO of Community Foundation Boulder County, calls “grantsmanship.” But polished grants don't necessarily mean an organization is tied to the community or is all that effective at anything other than paperwork and spin.

Duffy is among those nonprofit leaders who would prefer that foundations focus on her organization’s work and not polished applications, with their time-consuming and needlessly complicated paper and video reports. Still, she and other beleaguered nonprofit leaders play the game, contorting themselves into pretzels to meet foundations' requests. They field endless questions from grant managers, rewrite their budgets to fill in each funder’s slightly different form, and make sure that their organizations’ stories are tailored for each request.

During the pandemic, the demands of foundations have only gotten worse.

“In this time period, I’ve seen an increase of expectations,” Duffy says. “I know it’s coming from a good place, but every foundation has a COVID section [on its grants and reports] — three questions from each foundation. When you put that against twenty foundations, you have sixty additional questions to answer.”

That wastes time and money.

Then, as Duffy tries to go about her daily work, foundations and government grantors call Youth on Record and pester the nonprofit about not spending enough time acknowledging the funders on social media, or tell her that the group should produce photos, videos and blog posts — all without a budget.

By the time 2021 began, the burden had become too much for Duffy. So she wrote an open letter, titled "Nonprofit Teams Are on the Brink," to foundations in mid-January, imploring them to stop wasting nonprofits’ resources with pointless reporting, cohorts and marketing requirements.

The letter opens with a reminder that in a country that lacks a safety net when it comes to health and human services, nonprofits like Youth on Record, which uses music programming to keep young people in school, get stuck with the bulk of the work.

“Though many only know us from our gala events and charity breakfasts, our organizations fill the gaps in services that the government cannot and will not fill,” she writes. “We’re working at every intersection of our communities, from the ground up, and with limited resources.”

And foundations know this better than anybody, she notes.

Youth on Record in action.
Andrea Viarrial-Murphy
“You see firsthand the critical support services we offer,” Duffy writes. “And most importantly, you know us. Individuals and corporations aren’t in the fight quite like you are. And it is because of our closeness and long-standing relationships that I’m leaning on the foundation community to release your nonprofit partners from the tight grip of applications, reporting, marketing requests, required trainings, and cohort models – from this moment and until the world regains its sanity. To put it bluntly: Nobody has time for that.

“You can be part of the solution by providing unrestricted, multi-year funding,” Duffy's letter continues. “No hoops. No applications. No reports. Just faith that the trusted providers of services, the community builders and innovators, have doubled down on doing what we’ve always done. Serving, Protecting. Building. Dreaming. Filling the gaps. And keeping our communities alive and whole.”

Duffy knows that her letter might make some funders frown; that sector isn’t exactly known for its humility, as some foundation heads willingly admit. But with so many executive directors facing similar frustrations, she thought the risk was worth it.

“People are afraid,” she says. “They’re afraid in this time of uncertainty that telling the truth to our partners is going to backfire and we’re going to lose resources. Given what my fellow EDs are telling me and how scared they are and how much they’re really suffering to do their work right now, I felt it was an obligation and a risk I was willing to take on behalf of our community.” 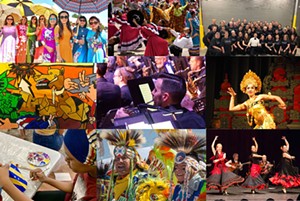 Bonfils-Stanton donates to numerous nonprofits, incuding Youth on Record.
Bonfils-Stanton Foundation
But Gary Steuer — head of the Bonfils-Stanton Foundation (which funds Youth on Record, among many other groups) who also serves as board chair of Philanthropy Colorado and is a director for the national group Grantmakers in the Arts — says that he had no problem with Duffy's letter. “I really respect her for putting this out there,” he explains. “There is a risk to it. You’re biting the hand that feeds you...that takes some guts.”

He sent the letter to various foundation groups of which he's a part, as well as across his social media channels; the response was positive, he reports.

According to Duffy, Steuer is already a leader in addressing many of the issues she's raised. Even so, her letter inspired him to push for greater reforms beyond the no-strings-attached grants, no requirements for visibility campaigns and extra emergency money that his foundation is offering. In fact, on January 20, the Bonfils-Stanton board voted to approve concrete changes, scrapping traditional applications and reports through the end of 2021 for groups with at least two years of general operating support or longstanding relationships with Bonfils-Stanton; the foundation will consider doing the same for other groups that have faced staffing cuts. That means no detailed writeups or supporting materials.

And in the foundation world, Steuer has not been alone in answering Duffy’s plea.

“I let out a big 'Amen' after I read it," says Denver Foundation CEO Javier Alberto Soto, who has been repositioning the 95-year-old community foundation during the fifteen months he's been there. "It’s the kind of message philanthropy needs to hear early and often. ... I think Jami helped the entire philanthropic field take note of the things they’re doing and go back and scrub their processes in being more effective in deploying their resources.”

Soto, who authorized COVID-relief grants early on, says he has already asked his staff to make applications and reporting easier for other grants. “The goal was to streamline all of this so we could turn around the resources as quickly as possible," he says, adding that doing so will free up time for his staffers so that they can focus on building deeper relationships with underfunded community groups.

While those changes will help during the pandemic, Soto plans to continue using the new, streamlined procedures after COVID-19 is under control. Making the application and reporting processes easier will also help understaffed nonprofits doing critical work in too-often-marginalized BIPOC communities; those are the groups an equity-minded foundation should aim to reach, he says.

Hernandez also expresses enthusiasm for Duffy’s message. “Jami’s letter is yet another reminder that systems are built by people, and we have the ability to reimagine those systems for today," she says. "I applaud her courage in speaking truth while acknowledging that these calls for reform are not new. The time to act is now.”

Denver Arts & Venues, which for months has been doling out small COVID-19 emergency grants to artists and organizations from CARES Act funds and other sources, has taken some hits from artists for its cumbersome application process. Still, the city agency has been working internally to make sure it can distribute money as quickly as possible to as many people as possible while looking through a lens of diversity and equity.

“I’m so glad she sent that letter, but for me, it’s preaching to the choir,” says Tariana Navas-Nieves, the city's director of cultural affairs who also serves as vice-chair of both Philanthropy Colorado and Grantmakers in the Arts.

While her agency was the first in Denver government to focus on equity in grant-making, Navas-Nieves says it still has a ways to go. “We have to have representation from BIPOC and historically marginalized communities,” she explains. “We need to have that collaborative decision-making. We need to simplify the process. We need to trust organizations. I’m always looking at how else we can do better. When I look at a final report, for me, I just want to know: 'How did it go? What was the challenge? How can we support you rather than being an extra burden?'

“The system is built with a lot of steps that make the process not accessible,” she continues. “I’m very thankful for Jami to bring that from the perspective of a nonprofit. For me, it felt like music to my ears. It’s underscoring what I’ve been talking about for a long time. How do we eliminate barriers to participation?”

Crystal Middlestadt, executive director of the Chinook Fund, a social-justice community foundation, says that her organization has done away with grant reports altogether and replaced them with short phone calls. After COVID-19 hit, Chinook renewed all returning spring grantees without requiring site visits and launched the Another World Is Possible Fund, which will move $1 million over the next year to BIPOC-led groups engaged in radical systemic change.

Long before equity became trendy in the foundation sector, the Chinook Fund was leading that work in Colorado, and Middlestadt has even more suggestions for reforms in the long run. “We believe in democratic and participatory grant-making,” she explains. “From our inception in 1987, we’ve had community-led grant-making to ensure accountability to the movements we fund. We demonstrate our trust in grassroots leadership by providing unrestricted funding and multi-year funding for longer-term grantee partners. We fund constituent-led, community-wide organizations that are addressing the root causes of injustice.”

Foundations need to look deeper into whether they’re granting enough money or just hoarding wealth that the community needs to survive, she suggests. “In my dream world, private foundations would be spending down, and more public foundations would be going that route,” Middlestadt says. “I would love to see more family-oriented philanthropists — instead of starting new foundations — really partner with community-based social-justice foundations and use those existing funds to redistribute their wealth.”

While Duffy has her own visions for how foundations could better address equity long-term, the changes that need to happen now are simple, she says.

Her message to foundations: “You know we’re doing the work. You know that’s why we’re in a relationship with you. You’ve got to let us do it. Once the fire is out, we’ll spend a little time to tell you how we put it out. We can’t tell you how we put it out while we’re putting it out. It doesn’t make sense. The whole world’s going to burn down while we do that. Send us money and double it.”

May the odds be ever in your favor.