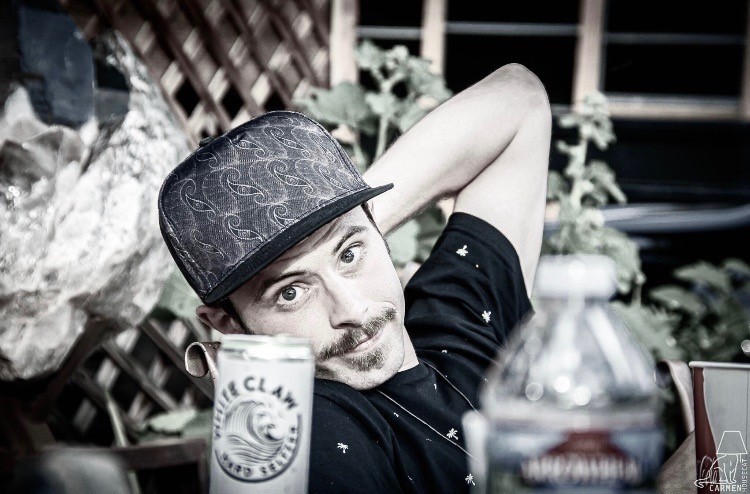 Carmen Adams
Giomassiv at Spa Fest 2020.
Philip “Giomassiv” Giomassis walked on stage and looked out at a sea of masks, with the Collegiate Peaks rising behind. The up-and-coming Denver producer was playing September's Up in the Air music festival at the Thunderbird Spirit Ranch animal sanctuary in Chaffee County, where groovy bass lines billowed across the Buena Vista Valley. The pandemic-friendly performance was Giomassis's third set ever, and his first time playing at a multi-day festival. He was thrilled.

“It was a relief being able to camp near a stage for live music again, and to feel safe about the regulations set in place by the festival hosts and the town of Buena Vista,” he says.

Giomassis, 25, is an up-and-coming talent in Denver’s thriving experimental electronic bass scene. The music he creates as Giomassiv — designed for large-format sound systems — could be played alongside Jade Cicada, kLL sMTH, Detox Unit or Duffrey.

Originally into the Grateful Dead and other jam bands, Giomassiv was turned on to electronic music by Bassnectar in 2014 and got more involved in the local bass scene. Three years ago he took up piano, and a year later decided to produce electronic music.

“After many years of traveling for music and having music as a central part of my life, I decided I wanted to create something,” he says. “It’s been a very immediate path.”

When he creates, he starts by building a chord progression with digital synths in Ableton and uses his production software to manipulate sounds to make them “squishy and nasty," he says. “I like to layer those chords with different instruments like synthesizers and build a drumbeat after that. It's a big process. A lot of compression, saturation and multi-band compression is involved. I have to compress and equalize every single sound that I'm using.”

Patience is key to producing, he says. “It's really easy to hit walls and discourage yourself, because there's so much shit to juggle while producing. Creative block is real, and sometimes I just have to listen to something completely different. I’ll throw on a Jerry Garcia vinyl or something along those lines.”

Throughout his producing career, Giomassis has had several mentors. His first, Alden Groves — his “Ableton angel” — taught him many of the fundamentals of production software. Groves helped him establish the groundwork through his six-month course at Denver Slam Academy, a music-education program taught by professional DJs and producers.

As he explored sound design and audio processing, Giomassis found inspiration on the YouTube channels of Mr. Bill and Underbelly. He spent full days during the COVID shutdown scribbling in his notebook, learning as much as he could.

He even took a one-on-one lesson with Jade Cicada, a major turning point during which Giomassis learned to create squelchy bass lines using Xfer and Ableton synths Serum and Operator.

Most recently, Andrew Bunyan, aka Pathwey, who produces a tribalesque style of electronic bass music, has served a crucial role in Giomassis's development. Pathwey taught him how to create a setting for his sound and to imagine being in that environment, explains Giomassis, and about granular synthesis, a fundamental style of sound synthesis that involves splitting an audio sample into small pieces around one to fifty milliseconds in length, called ‘grains’. Granular synthesis allows producers to take real-world sounds and transform them from the original audio file.

In June of 2020, Giomassis played at Spa Fest, a socially distanced event at the Cliff House Lodge in Morrison — his first-ever live set. There, he says, he learned many valuable lessons about performing for an audience.

“I remember the feeling of being anxious nearly the whole time, until I looked up from my equipment to see that people were dancing to my original music. Those people and that setting were a major turning point for me, and led to a string of miracles that have helped me gain exposure.”

Just two months later, he performed live for the second time at another socially distanced event at Your Mom’s House in Denver. This was his first set on a stage with booth monitors, dynamic lighting and visuals.

“I remember rocking the fuck out and seeing my whole family of friends getting down just as hard as we used to at festivals before the pandemic,” he says.

Throughout the pandemic, Giomassis has spent endless hours in his studio perfecting his sound; he'll debut several unreleased tracks at a February 13 show at Your Mom’s House, opening for MIDIcinal.

In 2021 and beyond, Giomassis plans to continue to build his production skills and see where technological advancements in sound production go. Along the way, he plans to collaborate with other producers, develop his repertoire of sound manipulation, and learn from more mentors.

“Be patient with yourself on your journey,” he tells himself. “Take the time to figure out what you really want. Once you know in your heart when you found that thing you truly desire, just send it and pursue what it is that makes you so incredibly happy.”