Courtesy of The Beer Spa
Don't drink it: Have a soak!
We've probably all experienced a beer bath — like that time at the music festival when a stranger accidentally dumped a 32-ounce Coors Light down your back.

But a new spa called, appropriately, The Beer Spa by Snug, gives you a chance to absorb the benefits of hops, barley and other botanicals without soaking in actual fermented beer. Jessica French and Damien Zouaoui are opening The Beer Spa at 3004 Downing Street on February 26, with a ribbon-cutting ceremony featuring Mayor Michael Hancock this Friday, February 12.

The name of the beer-therapy business conjures images of people submerging themselves in tubs of actual beer, but French explains that the only beer in the building is for drinking. "You do not soak in beer; that would be sticky and gross," she states. "Why waste good beer?"

Instead, the raw ingredients of beer — hops and barley — are combined with other herbs, selected by a master herbalist, in what French describes as a "giant tea bag." The result, she adds, is "efficient, healthy and pleasant."

Customers of the Beer Spa can book a private room for one or two people and enjoy a four-step, self-paced treatment: bath hydrotherapy with the therapeutic hops, barley and herbs; an infrared sauna; a rain shower; and an outdoor deck. French notes that the ingredients offer the benefits of relaxation, invigoration and wellness from B and K vitamins and other nutrients for the skin. There's also a relaxation lounge with "zero-gravity" chairs, next-generation massage chairs designed to make you feel as if you're floating. French says she and Zouaoui discovered the chairs in Korea while on a fourteen-month tour of 25 countries around the world.

But the Beer Spa offers more than just soaking. "Half of our facility is a taproom," French says. The bar side of the business offers ten taps on a self-serve wall, six of which will be taken up by a different Colorado brewery each month. For the opening month, the guest brewery is Ratio Beerworks, which is also supplying the hops and barley for the soaking baths for the month. Next up after Ratio is Denver Beer Company. 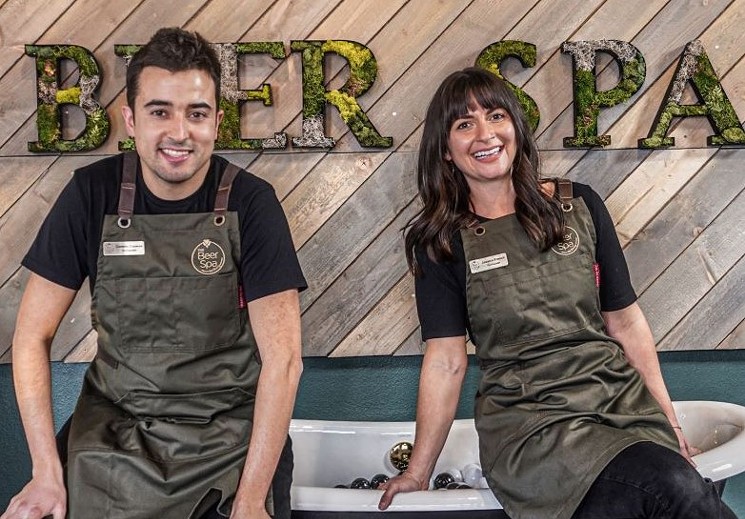 Damien Zouaoui and Jessica French are the founders of The Beer Spa.
Courtesy of The Beer Spa
The other four tap handles will pour a gluten-free beer from Holidaily Brewing Company, a cider from Stem Ciders, and red and white wines from the Infinite Monkey Theorem. Guest can also pour themselves Happy Leaf kombucha, Gruvi non-alcoholic beer or Hoplark HopTea on the honor system. Snacks come in the form of nut mixes from the nearby Jerry's Nut House. The Beer Spa pours all of its beverages in insulated stainless-steel tumblers, so you can carry your beer into your therapy room (though not into the relaxation lounge).

"We're always going to do something fresh and new," French adds, mentioning other beer-infused treatments like face masks as a possibility. She also notes that the spa is "socially distanced and COVID-friendly," since the therapy rooms are limited to two people who book together and the bar and lounge maintain more than six feet of separation between groups. While the spa treatments are available only by reservation, the bar and lounge are open to walk-ins, and French hopes neighbors will treat the taproom as their local bar.

The Beer Spa's setting, on the edge of Five Points and the Whittier neighborhood, is one of the city's key areas for promoting economic growth; the owners point out that about half of their funding came in the form of a loan from the Denver Office of Economic Development and Opportunity (the rest was provided by Colorado Lending Source). So you can thank the city next time you're having a relaxing soak.