Fear and Teetotaling in Denver: How I Started the City's Two-Hour Prohibition

Getty Images
One question set off chaos.
On Monday, March 23, 2020, Mayor Michael Hancock called a 2 p.m. press conference to announce that the City of Denver would be issuing a stay-at-home order because of the rising number of positive COVID-19 cases in Colorado.

Going well beyond what Governor Jared Polis had mandated up to that point, Hancock said that he was ordering all non-essential businesses in Denver to close their workplaces, and also requiring that residents stay at home except to go grocery shopping, exercise outdoors or seek medical care and medicine. The order was set to go into effect at 5 p.m. the next day, March 24.

I was following the press conference online and, at the urging of my editor, who was wondering if she should rip up sections of our annual Best of Denver issue, which was going to press in a few hours (and had already been revised several times to deal with the spreading pandemic), asked a burning question.

“Hi, this is Conor from Westword,” I said, speaking over another reporter, given the urgency of my query. “Um, so dispensaries and liquor stores, are they considered essential, or are they going to be closed?”

Hancock and those around him laughed, thinking I was joking. I wasn’t.

“Well, as far as the liquor store [is] concerned, yes, very essential,” Hancock said, chuckling. “Um, but I’m looking over at our city attorney — the liquor stores and dispensaries — Marley, you want to come up? But I think we’ve allowed them to continue operating, particularly for the medical marijuana.”

Up to the podium came Marley Bordovsky, a lawyer with the Denver City Attorney’s Office.

“That’s exactly what I was going to say,” Hancock added.

And that’s when the chaos began. 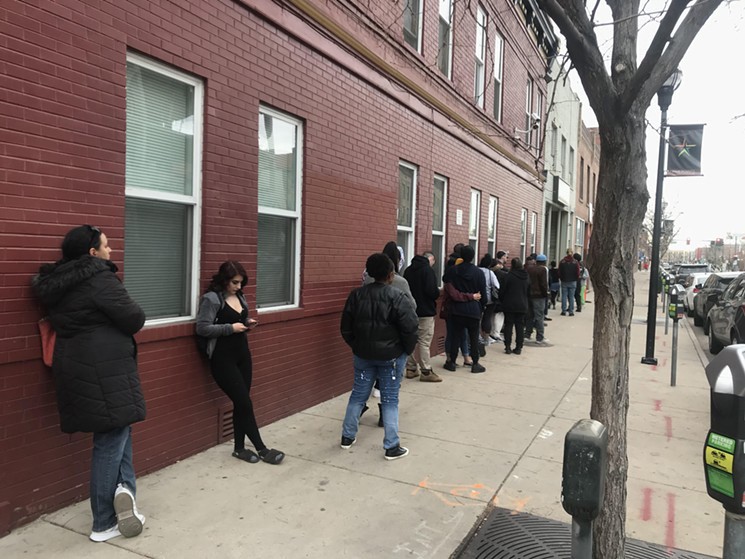 The line outside of Denver Kush Club on March 23, 2020, after Mayor Michael Hancock initially ordered dispensaries closed at 5 p.m. the next day.
Thomas Mitchell
“Within minutes, there was a line of a few hundred people around the store,” says Ron Vaughn, co-owner of Argonaut Wine and Liquor. “It was a Monday, so we clearly weren’t prepared to handle that kind of crowd.”

Thinking that liquor stores in Denver would be shutting down in just over 24 hours, the would-be shoppers were well-behaved, he recalls, but clearly anxious.

“If you were a Budweiser drinker or vodka drinker, you were buying a couple cases, not just one or two, as you regularly would,” Vaughn adds.

The town was filled with similar examples of prohibition madness as Denver residents rushed to beat the liquor and weed apocalypse.

“The scene outside was a madhouse as hordes of people were streaming out of their homes and apartment buildings headed toward the stores,” remembers Mike Heintzman, who lives in the Baker neighborhood. He quickly realized that his local dispensary had way too long a line, so he went to his local liquor store instead.

Inside the packed store, Heintzman says, he “grabbed a cardboard box, filled it with two boxes of wine and then whatever else I could carry: tequila, vodka, rum — things we don’t even drink. I left having spent about $200 and was feeling desperate that I didn’t get enough...so desperate that I called the mayor’s office when I got back home to let them know this was a ridiculous policy that had already backfired.”

Social worker Katie Calhoun had serious concerns about the policy. “My first thought was people with alcohol-use disorder were either going to die or bog down emergency departments at a time when they needed more capacity,” she recalls.

While Denver residents were making mad dashes to liquor stores and weed dispensaries, Jeanne McEvoy, then the executive director of the Colorado Licensed Beverage Association, which represents small liquor-licensed businesses, was dealing with the fallout from Hancock’s announcement.

“Fifteen seconds later, my phone lit up, and it was liquor stores. They were panicked,” says McEvoy, who got calls from stores as far away as Durango, confused as to whether the order applied to them or just Denver.

Dispensaries all over were swamped, too.

“We just watched the line grow exponentially faster than we could’ve handled it,” says Deina Elliott, regional retail manager for Terrapin Care Station, which has a location at 1 Broadway. “We took it in stride because we knew that if we were going to be closed down, we wanted to be able to take care of all the people we could.”

And those people were buying everything they could.

“They were definitely maxing their limit every time, consistently,” Elliott recalls. “Buying an ounce of flower or mix-and-match of flower and edibles. Concentrates. They were really going for it full force with getting their legal limit.” Some had come with their spouses or partners so they could double their purchases.

Cannabis store owners were making bank. According to marijuana sales tracker Flowhub, Denver dispensary sales skyrocketed 392 percent between noon and 4 p.m. that day, almost quadrupling the average afternoon sales rate for a Monday in 2020 up to that point.

The goal of the stay-at-home-order was to slow the spread of COVID-19 by limiting close interactions between people, but the opposite was happening.

Alan Salazar, Mayor Hancock’s chief of staff, had worked over the weekend with Bordovsky on the stay-at-home order. He and other Denver officials had been hoping that Polis would issue a stay-at-home order for all of Colorado before the city felt it had to act — after all, the governor had ordered all restaurants in the state closed to on-premises dining the week before — but as it turned out, Polis did not issue such an order until March 25; it took effect at 6 a.m. March 26. And both dispensaries and liquor stores were exempted as essential businesses.

But when Bordovsky spoke with state officials while Denver was working on its order, they said they didn’t view liquor stores and pot shops as essential businesses, she recalls.

“To me, personally, it didn’t strike me as an essential business,” Salazar says of liquor stores.

Bordovsky, Salazar and other Denver officials debated whether to include liquor stores and dispensaries in the essential category until just before the press conference, Bordovsky recalls. But they didn’t prep Hancock for any questions about alcohol or cannabis sales.

“I don’t know that we really thought that through,” Bordovsky admits. “I didn’t expect the run on the stores that we saw.”

But right after the press conference, Salazar began receiving text messages from pot- and liquor-industry stakeholders and lobbyists telling him that the city had made a mistake.

“I was frantically trying to get through to the mayor’s office,” remembers Peter Marcus, communications director for Terrapin Care Station. “Then the texts started coming back saying hold tight, hang tight.”

A news helicopter was hovering over Argonaut, streaming footage of the pandemonium. Salazar and Bordovsky realized just how crazy things had gotten when they turned on the TV.

“The decisions we’ve been trying to make from the get-go is what is the most protective of the public health. And this behavior wasn’t that at all,” Bordovsky says.

Still, Salazar’s initial advice to Mayor Hancock was to wait to see how things shook out before altering the stay-at-home order.

“The mayor’s instinct was, ‘No, we can’t wait to see how this plays out. We have to reverse course very quickly. We made a mistake. Let’s not linger on this one,’” Salazar remembers.

And reverse course Denver did.

Just before 5 p.m., the City of Denver posted an announcement on its social media accounts that it was changing its position on liquor stores and cannabis shops; they were considered essential businesses after all, and could remain open. As the news spread, the long lines dwindled.

“It was the shortest prohibition in history,” says Marcus.

Denver residents who lived through those dark hours can still purchase T-shirts online that say, “I Survived the Denver Prohibition, March 23, 2020, 3 p.m. to 5 p.m.”

“It would’ve been made worse if the mayor had taken my advice and waited to see how it all played out,” says Salazar, who jokes about designing his own “I Started the Denver Prohibition” T-shirt.