Malissa Chaplin
After twenty years of performance, Jennifer Deann Scott has gone solo.
“I like to take people on a journey,” says violinist Jennifer Deann Scott about her new solo act, in which she transforms covers and originals into tapestries of sound and light, playing in time with light projections and dancing.

Scott, who has been performing for two decades, dreamed up her new solo act, which she describes as "a luxury listening concept," during the early part of the pandemic. In these projection-based, LED-rich performances, Scott’s electric violin takes the lead over produced tracks and synchronized lights. She shines, making any stage a space to communicate the strength she’s gained over the years and to let life's hardships take flight.

“I want other folks — anybody who’s been put down, cast aside and put in the corner, told, ‘No, just sit still and do what you’re told’ — [to know they can] grow from it and step out of that negative experience,” she explains.

For Scott, that message manifests itself in her own compositions as well as others' she chooses to play.

“I’m very selective about what songs I cover,” she says. “I play by feel, and I experience music emotionally.”

Tonally, she explains, she’s more drawn toward the melancholy, the reflective and the introspective. She leans into those feelings and expresses them through rhythm, speed and key signature. Eventually the song sounds something like electronic dance music and elevates the melancholy, raises the heart rate and compels people to sway or move, she explains.

Scott first learned about EDM at the University of Idaho’s Lionel Hampton School of Music, where she earned a Bachelor of Music in violin performance, with minors in vocal and dance performance. She loved the style immediately, because it allowed her to give music a new dimensionality by infusing compositions with layered and overdubbed sounds.

But her versatility with the genre comes in part from her experience with many kinds of music. After the University of Idaho, Scott earned a master's degree in music composition at the University of Colorado Boulder. She then went on to perform in orchestral ensembles with the Walt Disney Company in Florida, and in bluegrass, Celtic and country bands in seven states. She’s currently a member of Twenty Hands High, a Denver country act.

And while she still loves those opportunities and that variety, she realized during lockdown that she needed an additional creative outlet. As a gigging violinist, she often fills a specific role in a band, and she wanted more freedom to express herself center stage. She says that constantly molding herself to the wishes of others has its own way of sucking her soul.

So she started working on new songs in her 500-square-foot studio apartment alongside her partner, Eric Schreiber, who was simultaneously learning light-form projection mapping. Schreiber brings the light and projections to the shows, highlighting aspects of each venue and drawing attention back to the music. 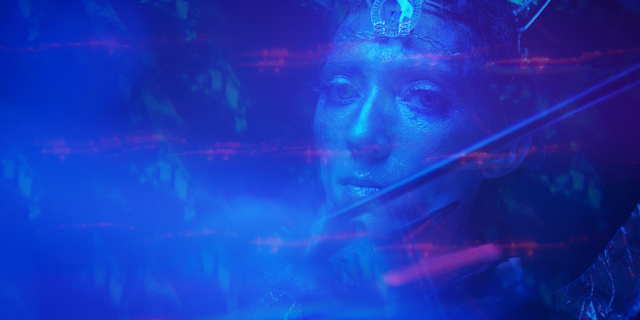 Scott started orchestrating the nuances of her solo performance during the initial weeks of quarantine.
Pat Dingman
The two began working on the collaborative aspect of Scott's shows.

“Although I call it a solo show, by no means do I call it a one-man band,” says Scott. She hopes that in addition to working with Schreiber’s lights, she can include painters, dancers and other musicians. She wants to integrate their narratives into each performance.

“The long and the short of it is that I want to connect with the community, anyone who is struggling, just see that there’s hope,” she says.

And to celebrate such empowerment, Scott tops off each performance with elaborate costumes and dance. She often wears different outfits for different sets, and her mask and violin are each bedecked with their own LED setups.

While there was once a time in Scott’s life when she was told to sit still in her orchestra chair and play, that time is long gone.

To learn more about Scott’s luxury-listening concept, visit her website. Scott will play a short solo set during her regular performance run with Twenty Hands High at the Grizzly Rose from April 15 to 18.