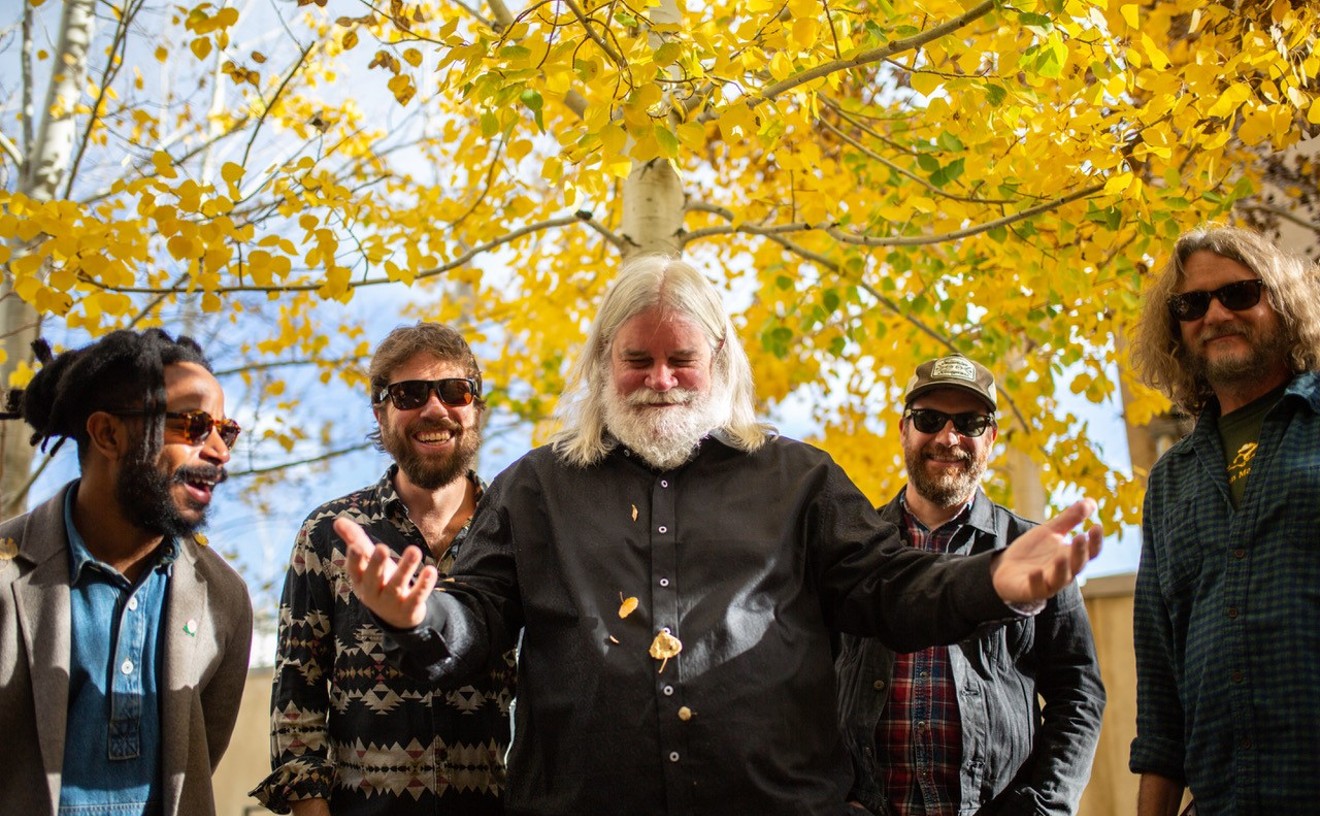 Photo by John-Ryan Lockman
The jamgrass band plays Red Rocks on May 7 and 8.
While the pandemic has put a damper on much of Leftover Salmon's live-music fun, it hasn't stopped the Rocky Mountain-launched jamgrass band from recording a new batch of rootsy and eclectic offerings over the past year. On the group's latest release, Brand New Good Old Days, the band serves up a sizzling ten-track platter of its characteristically eclectic fare, with Greg Garrison, the group's longest-running bassist, producing the new release and singing one of his own songs, "Left Unsung," an homage to the late Jeff Austin of Yonder Mountain String Band.

Westword caught up with Garrison to discuss the new drop and the latest developments for Salmon.

Westword: You've got some really cool stuff on this one. You kick it off with a great cover of Soundgarden's "Black Hole Sun," sung by Drew Emmitt. Was that a song he asked to do?

Greg Garrison: Yeah. When we were in the studio — it was pre-pandemic, of course, but we recorded it at a place called Echo Mountain Recording, in Asheville, North Carolina. We were looking for some tunes to round out the album, and in conversations with Drew, he said, "I always thought 'Black Hole Sun' would be kind of cool to do as a bluegrass tune." So in the days leading up to the session, I found an arrangement and charted it out. I think it came out really well. It's got a bunch of different parts in there, and some really odd phrasing and a cool progression that isn't just a typical one-four-five bluegrass tune.
Do you have a method for apportioning tracks to the various musicians in the band when making albums?

I wanted to make sure that Vince [Herman] and Drew were prominently presented, because they started the band, and their voices are most associated with Leftover Salmon. This is the first studio album that I've produced for the band, but I figured their voices should be the most heavily featured. At the same time, our banjo player, Andy Thorn, writes a lot of great tunes, and a lot of his songs are becoming classic modern Salmon tunes, so I also wanted to represent him on there — as well as our drummer Alwyn [Robinson] and myself. I figured at least 60 percent of the record should be Drew and Vince, and then I filled it in from there.

Yeah, he sings "Red Rox Run" on there. It's apropos for the times, given the recent gun violence in Boulder and other places, although he had actually written the song long before the shootings. He also co-wrote the last song on the album, "We'll Get By," along with Vince.

I heard some nice female vocals on one track.

That's Drew's daughter, Willa. She sings on the song "Waterfront." She just turned eighteen and is a great singer and songwriter in her own right out of Crested Butte. The apple didn't fall too far from the tree. Drew's son is also a great musician, so there's some talent running in the family, for sure.

And there are a couple of really fun covers in there, too — "Category Stomp," by John Hartford, and "Boogie Grass Band," by Conway Twitty.

Yeah, "Category Stomp" is a weird but really fun tune. Hartford's songs, for whatever reason, seem to fit us like a glove. It's that combination of being really well written and being just weird enough so that we can put our own spin on them without doing any damage to the originals. "Boogie Grass Band" was written by a Nashville songwriter named Ronnie Reno, but it was recorded by Conway Twitty. That one was actually suggested to Vince by Del McCoury's son Ronnie McCoury. So we threw it on there. It came out really well.

Are you mostly on electric bass for this album?

Yes, I mostly play an electric bass with Salmon. I also play upright bass, mostly for our unplugged sets, and I've recorded on upright bass in the past with the band, but it's all electric on this release. In general, it's easier to transport an electric bass versus an upright, and because we're well known for our rocking sets, the electric allows me to get more of a rock-and-roll volume and set a good ground floor for the band.

What did being the producer of the album entail?

It meant doing a lot of organization, weeding through the material and keeping the project on track. I had to keep everything moving in the studio, and then once we were done with that, it was a lot of editing — working in Pro Tools and making sure the arrangements were good, and fixing things that needed to be fixed. I also worked along with Mario Casilio, our sound engineer, to make sure the mixes were right. But basically, I oversaw the entire project to make sure it sounded as good as it possibly could.

What number studio album is this for Salmon?

I think this would be our eighth studio release. I feel like we've hit a good stride on the last couple records. Something Higher [2018] was really fun and creative, and this one fits into that same pocket — where when we get into the studio we're just enjoying making the music, recording some great songs and getting really creative.

Anything else you want to say about the record?

We're really glad to be working with Compass Records again. The last time we worked with them was on Live [2002].  After self-releasing a bunch of our albums, it's nice to be back working with a well-respected label that does a great job getting it out to people. It's owned by the musicians Alison Brown and her husband, Garry West, who is a great bass player in his own right. They're great people with a great label that has an excellent presence in folk, bluegrass, Americana and other roots genres. They have the same values that we do, so we're excited about it.

Does the band feel any pressure to release a record every couple years?

We're on a pretty loose timeline, but if we have stuff that we want to put out, then we'll record. It's important for us to stay vital and not just rest on our laurels, so it's good to work up new material. We like to keep our fans engaged and stay creative.

Vince just moved to Nashville, and he's getting into a whole new songwriter circle, and Drew is doing a solo project with a label in North Carolina, along with a guy named Jon Weisberger, who co-wrote a bunch of the tunes on the Billy Strings album Home that just won a Grammy. We'll probably record another album sooner than later, because there's a lot of creativity bubbling around. But we record because we love it.

Brand New Good Old Days drops on May 7 on Compass Records. Leftover Salmon plays Red Rocks on Friday, May 7, and Saturday, May 8.