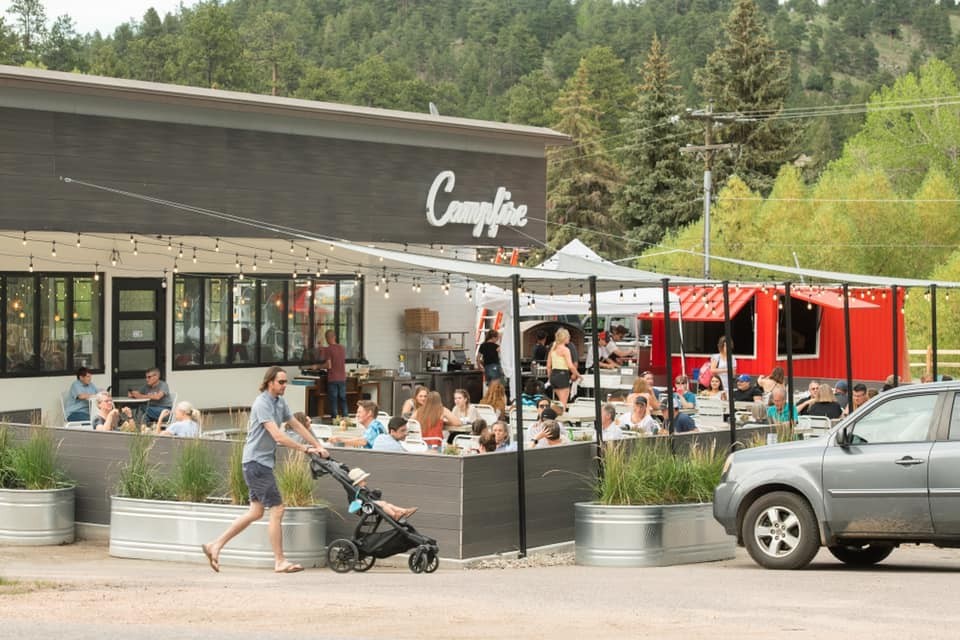 Campfire/Facebook
Pizza on the patio has been a hit at Campfire so far.
Now that official COVID-19 dining restrictions are a thing of the past in Colorado, bar and restaurant openings are making a big comeback. Also making a comeback is our First Look series, which offers an inside assessment of the latest additions to Denver's culinary scene. Next up: Campfire in Evergreen. 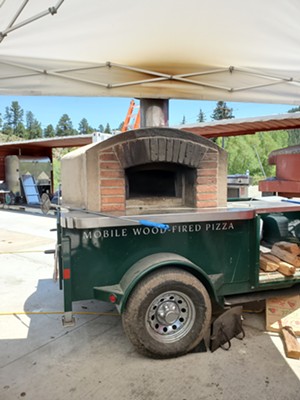 A whole lot of pizzas have already been cooked in this mobile wood-fired oven.
Molly Martin
What we saw: On June 8, the tables on the large patio in front of Campfire were nearly all in full sun. The outdoor pizza oven was fired up, and pizzaiolo Bryan Rosen was manning the flames and expertly pulling pies for several groups seated at the few shady tables.

"We're adding more shades soon," owner Jared Leonard promised. And they did, just a couple of days later. Campfire has been a work in progress for the restaurateur, who, along with wife Amanda, owns the Budlong Hot Chicken, AJ's Pit Bar-B-Q and Grabowski's Pizzeria at the Source, all in Denver.

The Leonards landed in Colorado when Jared came to the Mile High from Chicago to open Au Feu at Zeppelin Station in late 2017. Budlong was a concept he'd previously launched in Chicago, as was BBQ Supply Co., which he rebranded as AJ's when he opened it in Denver in 2019. During that first stint in the metro area, which was supposed to be temporary, the couple fell in love with the Colorado lifestyle and bought a home in Evergreen. "We're here for good," Jared says.

"The idea of Campfire was always a place for people to gather," he explains. "I grew up camping, and when you got there, you started a fire, and we cooked every meal on the fire and told stories around the fire. You would always come back to the fire."

The aroma of burning wood is one of the first things that hits you when you walk up to Campfire. Nearly all of the culinary action takes place in the outdoor kitchen, which, like the rest of the restaurant, continues to evolve. Right now, the main attraction is that pizza oven built by Fire Within in Fort Collins, which allowed Leonard and Rosen to begin serving wood-fired, Neapolitan-style pizzas on the patio on May 12.

A Facebook post on May 27 alerted fans of a bigger menu to come on June 8, but on that date, the planned menu additions — which include rotisserie chicken and wood-fired barbecue — were still on hold, as was indoor seating as Leonard waits for an official go-ahead from the city.

Elements of Leonard's full vision, like live music played on the bed of an old truck and the start of a kids' play area, are now in place, and other additions — like a bocce ball court and full service instead of the QR code ordering system used through the soft open — are coming soon, along with those new menu additions. 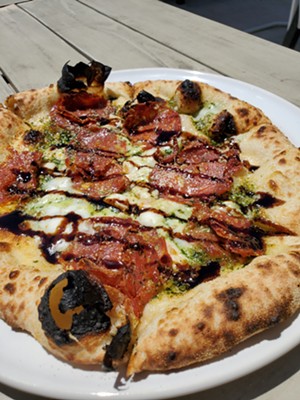 That crust, though.
Molly Martin
What surprised us: The pizza. Leonard is known for the thin-crust, Chicago tavern-style pies he serves at Grabowski's. Bringing on Rosen — whose prior experience includes Marco's Coal-Fired, which boasts certification by Italy's official authority on pizza, the Associazione Verace Pizza Napoletana — has resulted in an exemplary product. "The main ingredient is love," Rosen says, smiling.

Italy would likely not approve of some of the non-traditional toppings at Campfire, such as fire-roasted corn with fennel sausage and garlic cream, or Calabrese salami and cherry peppers with a drizzle of hot honey, but it really doesn't matter when it tastes good, does it? The charred and chewy crust is the kind you won't leave a trace of behind, and now that Campfire has its liquor license, you can pair your pie with beer or wine. A full bar is another element that's coming soon.

Barbecue made its Campfire debut on June 20 following the Evergreen Rodeo, but it's still not listed on the online menu. This ’cue is a completely different style than the Texas-inspired smoked meats at AJ's, with a focus on pulled pork, smoked chicken, tri-tip and trout. And there's rotisserie chicken, too; Leonard envisions families picking up whole chicken meals to go with sides made with Colorado-grown produce for easy, nourishing meals.

Leonard's plans don't end with barbecue, chicken and bocce ball. His property line and liquor license extend all the way into Bear Creek. "I don't know what we'll be able to do on the banks of the river, but there's a big flat area," he says, imagining the possibilities.

In the meantime, it's summer in Colorado — and outdoor dining near a creek in the foothills is a pretty delicious option.