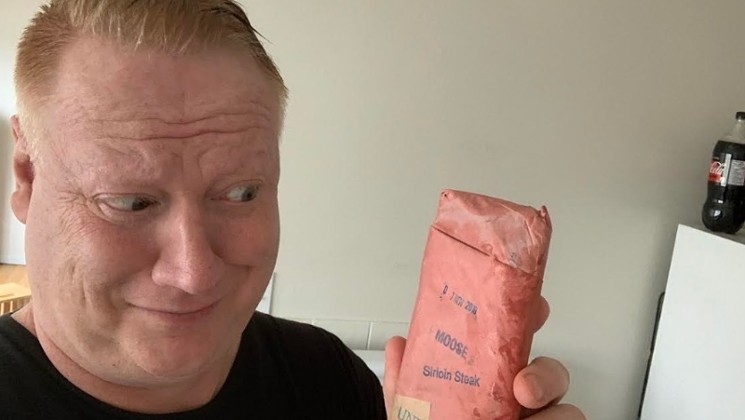 Photo courtesy of Adrian Dater
Adrian Dater eyeballing a slab of moose meat he found in the freezer of his Edmonton Airbnb in July 2020.
At the start of the 2021 National Hockey League playoffs, your Colorado Avalanche was the odds-on favorites to win the Stanley Cup — and after a blistering first-round sweep of the St. Louis Blues and victories in the first two games against the Vegas Golden Knights, these predictions looked prescient. But the Avs then lost four straight games, with last night's crushing 6-3 defeat sending them home for the summer.

Yet getting almost as much attention as the squad's sad season ending was a post-game question asked of Avs superstar Nathan MacKinnon, in which hockey writer Adrian Dater dropped an F-bomb.

Specifically, Dater said: "I’m just thinking out loud in your shoes right now: 'All right, we’ve done all we can do, we’ve done all the game planning, maybe just…fuck it, we’ll go in next year and not think and just win this thing when we don’t think that much.' Am I on the right path at all with this? Like maybe this guy’s thinking too much?"

MacKinnon's hilarious response? A long pause, a single word — "No" — and a second pause accompanied by an expression that suggested that he couldn't believe what just happened.

See it for yourself here:

The question might have seemed surprising coming from another journalist, but not from Dater, who's had plenty of career ups and downs. He began writing about hockey for the Denver Post in the early 1990s, and when the Colorado Avalanche launched in 1995, he became one of the most authoritative voices covering the team. But his life got a lot more complicated in 2014, when Dater was sacked by the paper over missteps on Twitter. First, he was suspended for using the platform to call one player a "pussy" and advising someone else corresponding with him to "fuck off." Then, a couple of months later, he was given his walking papers after what we described at the time as "a strange come-on to a Detroit Red Wings Fan."

In announcing his departure from the Post, Dater revealed that he was dealing with substance abuse, and as he told us last July, when he spoke to us from the NHL's COVID-19 bubble in Canada, cleaning up and rebuilding his life and career wasn't easy. "I went from being a spoiled, entitled sportswriter riding in big planes and staying in nice hotels to shoveling snow in an elementary-school parking lot where I was working as a substitute gym teacher three months later," he recalled. "I was thinking, 'How did I get here?' It's been a journey back, and I think I'm the better for it. ... What happened may have been a good thing in the sense that it finally forced me to change some things, things that had been festering."

Dater came back by creating Colorado Hockey Now, the single best news source on the Avalanche, and he admitted that the inquiry "didn't translate well" in his post-mortem column, "Avalanche, like Sisyphus, Can’t Get Over the Hump."

He makes the same acknowledgment in a response to Westword. "Honestly, I was just trying to be 'real' with Nathan, trying to ask if they might just take a 'Screw it, we’re not going to overthink anything anymore' attitude next year," he says. "But I used another word that was a little too real and shouldn’t have done it. I mangled the whole thing. That is how writers and players often talk to each other in locker rooms. But you probably shouldn’t do it on Zoom."

This post has been updated to include a response from Adrian Dater.