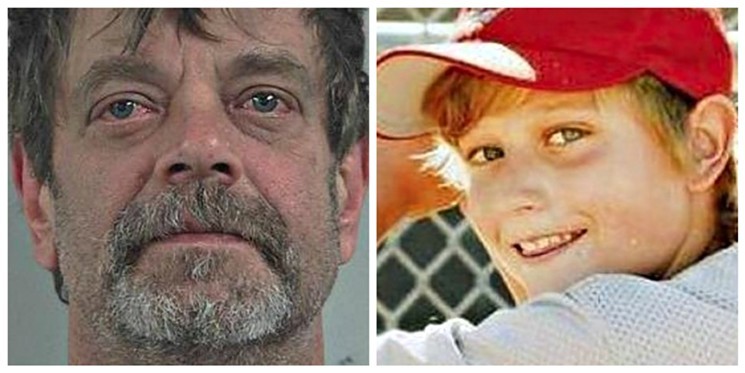 La Plata County Sheriff's Office/Family photo
Mark Redwine's 2017 booking photo and a family snapshot of the late Dylan Redwine.
Update: On the afternoon of July 16, a jury found Mark Redwine guilty of second-degree murder and child abuse resulting in death in regard to his son, Dylan Redwine, who disappeared in 2012 near Durango. Continue for our overview of the case, published at the outset of the trial.

Original post, June 14: It's been more than eight years since thirteen-year-old Dylan Redwine was last seen alive, and at times over that span, the possibility of justice in the tragic case seemed remote. But today, June 14, jury selection is finally under way in La Plata County for the trial of Dylan's father, Mark Redwine, following a November mistrial over reports that a defense attorney in the case might have COVID-19.

Delays have been typical for a case that's been marked by anger and bitterness over a young life that ended far too soon, as documented in Westword coverage published over the better part of a decade.

According to the grand jury indictment against Mark, who was arrested on July 22, 2017, in Bellingham, Washington, Dylan flew to Colorado on November 18, 2012, for a court-ordered visit with his father, who was involved in what is described as "an intensely contested custody" dispute with his ex-wife, Elaine Hall. After stopping at a Walmart and a McDonald's, Dylan and his father arrived at Mark's home, located at 2343 County Road 500 in Bayfield, a town in La Plata County.

The indictment points out that Mark and Dylan "had argued and fought on their previous visit" and "had not been getting along" leading up to the teen's latest trip to Bayfield. Several witnesses said that Dylan didn't want to stay with his dad, and he sent a text message to a friend asking whether he could room with him on the night of his arrival — a request that Mark nixed. In what appears to have been his final telephone conversation, Dylan made arrangements to visit his pal the next morning.

The report suggests that the blood was fairly fresh, in all probability, since the house had undergone a major remodel in March 2012, and Dylan had only limited access to the home before that November.

In June 2013, some of Dylan's remains were located "about eight miles up Middle Mountain Road from Mark's house, roughly one mile past the gate, which closes seasonally around November 30 every year, and only 100 yards or so from the road directly off an ATV trail." The indictment adds that "Mark had an ATV in his garage and was very familiar with Middle Mountain Road."

A couple of months later, on August 5, 2013, a human-remains detection dog went through Mark's house "to determine if the corpse of a deceased human had been present at that location," according to the indictment, and the dog "indicated the presence of cadaver scent in various locations in the home, including the living room and the washing machine."

Nonetheless, Mark evaded arrest — and two more years passed before, on November 1, 2015, hikers stumbled upon Dylan's skull about a mile and a half from the spot on Middle Mountain Road where the other remains had been spotted. A Colorado Parks and Wildlife officer quoted in the indictment believes it's unlikely that an animal dragged Dylan's body to the previous recovery site, or the skull to the location where it was discovered, implying that a human must have moved them.

Forensic anthropologists determined that Dylan's skull "had injuries consistent with blunt-force trauma," including "two small markings consistent with tool marks from a knife," the indictment continues — and this information reminded investigators of a conversation with Mark reported by Dylan's half-brother, Brandon Redwine, more than two years earlier. Brandon told investigators that Mark "had mentioned blunt-force trauma several times and discussed how investigators would have to find the rest of the body, including the skull, before they could determine if this was the cause of death."

Supplementing physical evidence in the indictment are a number of remarks attributed to Mark. Another ex-wife, Betsy Horvath, said he'd told her "that if he ever had to get rid of a body, he would leave it out in the mountains." During their divorce proceedings, the indictment notes, "Mr. Redwine repeatedly violated the custody agreement and told Ms. Horvath that he would 'kill the kids before he let her have them.'"

Despite the volume of material, Mark's trial didn't get under way until the fall of 2020. But on November 9, Judge Jeffrey Wilson declared a mistrial following a status conference at which a public defender said one of the other attorneys was experiencing COVID-19 symptoms that would require the team to quarantine.

According to the judge's order, the prosecutor, Christian Champagne, "made allegations concerning recent behavior of one of Mr. Redwine's attorneys and the contents of a telephone call made from the La Plata County Jail. The Court, for the reasons stated on the record and without making any findings as to the veracity of the allegations, finds that even if such allegations are true, the Court has no choice but to grant D-180 and declare a mistrial to ensure that Mr. Redwine has effective assistance of counsel."

A new trial date was subsequently set for April 2021 before being bumped again. The do-over starts today.

Click to read the Mark Redwine indictment. In addition, here are some past Westword posts about Dylan Redwine:

May 5, 2014: "Dylan Redwine homicide: Is just-hospitalized dad Mark Redwine being stalked by haters?"