Casa Bonita Is Open! (If You Want to Tour the Place, at Least)

Evan Semón
Casa Bonita opened almost fifty years ago at 6715 West Colfax Avenue, but it's been closed since March 2020.
Closed since mid-March 2020, Casa Bonita is now offering free tours of the pink eatertainment palace with the 85-foot-high stucco tower as the place gears up for reopening.

"We have such a great entertainment group already put together that we just said, 'Hey, why don't we do these tours?' We're not charging for ’em, but we're keeping our entertainers in practice, and it's actually kind of fun and keeps our employees enthusiastic," explains Robert Wheaton. His company, Summit Family Restaurants, currently owns the restaurant at 6715 West Colfax Avenue in Lakewood that was founded by Bill Waugh in 1974 and made internationally famous by a 2003 episode of South Park titled "Casa Bonita."

The tours offer fans a chance to fully explore the 52,000-square-foot facility with a staff member sharing the history and urban legends connected to Casa Bonita. Chiquita, the gorilla-suit-clad character, may not be present, nor will there be any cliff-diving performances. But the tours still give people the chance to visit Black Bart's Cave and traverse the various rooms featuring quasi-Mexican, Spanish and Moorish architecture, all without bumping into one of the 1,200 diners that the restaurant can pack in when operating at full capacity. And those who aren't necessarily fans of the Mexican cuisine at Casa Bonita needn't worry: The kitchen is still closed.

"I would also encourage people to stop by if they're interested in working for Casa Bonita to fill out an application. We should be opening up pretty soon," says Wheaton, adding that he hopes the restaurant will be fully back in business sometime in August.

Casa Bonita has been navigating rocky financial times since the start of the COVID-19 pandemic. It closed when all restaurants were ordered shuttered for on-premises dining on March 17, 2020. While other restaurants began offering to-go options and then reopened with limited capacity in late May 2020, Casa Bonita remained locked up tight. 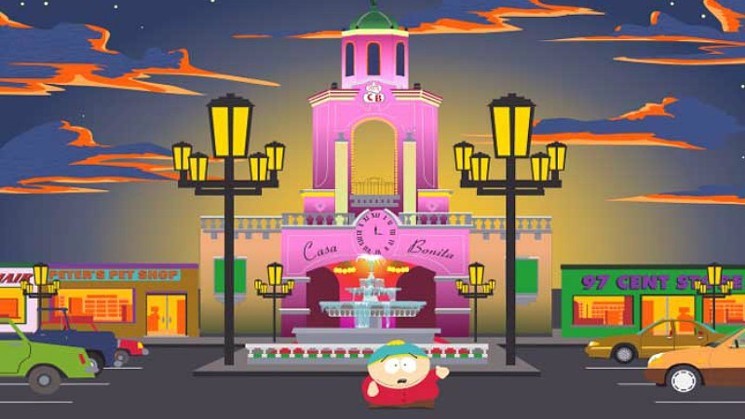 Eric Cartman's trip to Casa Bonita in a 2004 episode of South Park raised the restaurant's profile.
South Park
Summit Family Restaurants started missing rent payments to BSV Lamont JCRS, its landlord at the Lakewood shopping plaza, in June 2020. As of April, Casa Bonita owed BSV Lamont JCRS over $350,000 in unpaid rent. That's when Casa Bonita filed for chapter 11 bankruptcy protection in Arizona. Court filings associated with the case indicate that Casa Bonita plans to repay its debts using a combination of federal emergency business relief money and the profits that the restaurant and entertainment complex generates when it is at full capacity.

In the meantime, interested would-be owners have been looking at the property, and a group of passionate Casa Bonita fans aren't taking any chances that it might fall into the hands of someone who doesn't appreciate the charms of the place. "We're trying to put together an offer," says Andrew Novick, the leader of Save Casa Bonita, which is hosting a GoFundMe campaign to raise both money and attention, and held a Raise the Flag for Casa Bonita rally outside My Brother's Bar on June 14.

After having paid off some of Casa Bonita's creditors, Save Casa Bonita LLC is now a creditor itself, and so a party to the bankruptcy actions.

Asked during a May 11 bankruptcy hearing whether Casa Bonita has received inquiries from people interested in purchasing the business, Wheaton responded affirmatively and added that Casa Bonita has been a "consistently profitable investment" for many years. "I think the investment will be far more valuable if the restaurant is open than selling it shuttered," said Wheaton, who added that he's focused on reopening the business rather than selling it.

Novick calls the staff now working at Casa Bonita "awesome," and says they're "doing everything they can to support it and reopen it." He suggests that Casa Bonita may have started the tours so that the restaurant could keep in line with lease requirements about needing to remain open.

"We are trying to honor our lease obligations, and there are continuous-operation provisions in our lease agreement, and that comes into play, but you know, we were ready to go," explains Wheaton. "We just had so many people coming by and interested."

The current hold-up to reopening is a wait for some mechanical parts for the restaurant's infrastructure that have been delayed for months, according to Wheaton. "We're simply going to open as soon as we can," he says. "And it should be sooner versus later."

Tours of Casa Bonita are available on a drop-in basis from 11 a.m. to 9 p.m. Sunday through Thursday and 11 a.m. to 10 p.m. on Friday and Saturday; prospective employees can also turn in applications during those hours. Casa Bonita is located at 6715 West Colfax Avenue.