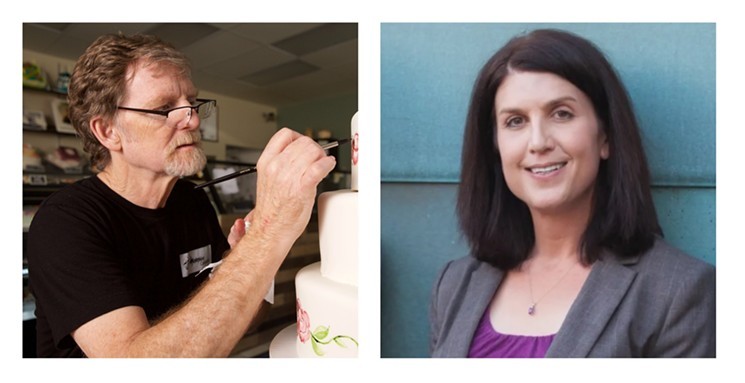 adfmedia.org/scardinalaw.com
Jack Phillips of Masterpiece Cakeshop and attorney Autumn Scardina faced off in court.
Masterpiece Cakeshop owner Jack Phillips became a darling of the conservative movement following his 2012 refusal to make a wedding cake for a gay couple because of his Christian beliefs, and his reputation was burnished after the U.S. Supreme Court ruled in his favor in June 2018. He's among the marquee personalities at the June 18-19 Western Conservative Summit in Denver, whose list of speakers includes right-wing favorite Representative Lauren Boebert.

But on June 15, shortly before this scheduled star turn, Phillips was handed a major defeat: A Denver District Court ruled that he had discriminated against lawyer Autumn Scardina by declining to make her a pink-and-blue birthday cake after learning she's transgender — and in his decision, Judge A. Bruce Jones used a disreputed Clinton-era policy to help explain his rationale.

"The concept that a business can decide whether to make the requested item depending on what information the customer provides would establish the equivalent of a 'Don’t Ask, Don’t Tell' rule," Jones wrote. "LGBT individuals would be entitled to equal service only to the extent they do not request goods that reflect their identity as LGBT individuals (or at least do not inform Defendants of that reflection)."

Paula Greisen, Scardina's attorney, is pleased that Jones saw the case as she did, but not surprised. "What is clear from the evidence," she says, "is that the refusal to provide the goods based on the fact that Ms. Scardina is a transgender woman is discrimination under Colorado's anti-discrimination laws."

Alliance Defending Freedom, the nonprofit organization that's represented Phillips throughout his legal journeys during the past decade, sees Jones's edict very differently. On June 16, ADF announced that it would appeal the decision and issued a statement from its general counsel, Kristen Waggoner, that portrays Scardina as an antagonist and Phillips as a victim of a liberal campaign that seeks to destroy him.

"Jack Phillips serves all people but shouldn’t be forced to create custom cakes with messages that violate his conscience," Waggoner maintained. "In this case, an activist attorney demanded Jack create custom cakes in order to ‘test’ Jack and ‘correct the errors’ of his thinking, and the activist even threatened to sue Jack again if the case is dismissed for any reason. Radical activists and government officials are targeting artists like Jack because they won’t promote messages on marriage and sexuality that violate their core convictions. This case and others...represent a disturbing trend: the weaponization of our justice system to ruin those with whom the activists disagree."

Waggoner adds, "We will appeal this decision and continue to defend the freedom of all Americans to peacefully live and work according to their deeply held beliefs without fear of punishment."

Responds Greisen: "It's sad that Masterpiece and its counsel has chosen to villainize people who disagree with their position on LGBTQ equality. We strongly believe in religious freedom, but it's been settled for decades by the U.S. Supreme Court that businesses open to the public and using the public infrastructure cannot refuse services to all people equally because of the identity of the customer."

Greisen continues: "The tone of this discussion, like so many others in our society right now, is unfortunate, because it seeks to paint people who disagree as somehow evil or ill-motivated. But regardless, when a person like Ms. Scardina or someone else in her community has an affront to their dignity, they have the right to stand up for what they believe, and for their individual freedoms, just like Mr. Phillips has. And that's all Ms. Scardina is doing."

Scardina phoned Masterpiece Cakeshop, located in Lakewood, in 2017 "and asked for a pink-and-blue birthday cake," Greisen recounts. "She asked if they could make it in a certain size, by a certain date, and the undisputed evidence shows that they said yes, they could make that cake. In fact, Jack Phillips testified he would gladly make that exact same cake for any other customer. It was only after Ms. Scardina revealed that she is a transgender woman, and told him what the colors on the cake meant to her, that the bakery refused to make the cake. The Cakeshop owner also testified that he would make a rainbow cake for a Sunday school class, but he would not make the exact same cake for an LGBTQ customer."

As a result, Greisen says, "It is clear that this is not about cake, and it's not about a specific item. It's about the bakery's decision that it will not sell goods and services to anyone in the LGBTQ community if that item reflects the person's LGBTQ status. Jack Phillips testified about that, too. He said if Ms. Scardina hadn't told them she was transgender, and hadn't told them what the cake meant to her, they would have sold her the cake."

At first blush, the Scardina ruling would seem to contradict the U.S. Supreme Court determination related to the wedding cake that Phillips wouldn't make for Charlie Craig and David Mullins back in 2012. But Greisen contends that from a legal perspective, the matters are very different.

"The U.S. Supreme Court did not invalidate anti-discrimination laws" in the Craig-Mullins case, she stresses. "In fact, the court said these laws are quote-unquote unremarkable, because it's been settled for decades in this country that businesses open to the public cannot decide whether to serve someone based on the customer's protected status. The first case involved a very narrow exception because some comments had been made by a state commissioner that had nothing to do with the merits of the case, but that the Supreme Court felt were unfair to Mr. Phillips. And Mr. Phillips made repeated statements throughout the first case that he would sell any other bakery item to an LGBTQ individual, including birthday cakes, but that he only objected to the wedding cake because of its religious significance to him."

According to Greisen, Scardina is "a devout Christian, and she believed Mr. Phillips when he said he would serve her community. And the item requested in this case — a birthday cake — has no religious connotation, and Jack Phillips admitted at trial that there's no inherent message in the cake Ms. Scardina requested."

ADF's promised appeal of Jones's ruling cannot immediately jump to the U.S. Supreme Court. But should the case ultimately be heard by what is now an even more conservative collection of justices than were seated back in 2018, Greisen remains hopeful that the Denver decision would be upheld.

"I appreciate that the ideology of the Supreme Court has shifted," she says. "But I also believe that the court has a strong adherence to precedent, and eviscerating the civil rights laws of this country based on an individual's choice not to serve a customer would be a radical departure."

The repercussions of such a course change could be profound. "Think about what a slippery slope that would be," Greisen says. "It would essentially say that you wouldn't have to serve a woman business owner because your religious views are such that you think women should not work outside of the home. Or a photographer could refuse to take photographs of an interracial family if that would violate their religious views. And that could all happen under a ruling in which Mr. Phillips is allowed to pick and choose his customers based on their identity."