Now that official COVID-19 dining restrictions are a thing of the past in Colorado, bar and restaurant openings are making a big comeback. Also making a comeback is our First Look series, which offers an inside assessment of the latest additions to Denver's culinary scene. Next up: Pindustry in Greenwood Village, which opens June 26.

What we saw: On a stretch of Arapahoe Road near the Denver Tech Center that for years was best known for chain restaurants like Red Robin, Boston Market and Qdoba, big changes are in progress. In December 2020, the Arapahoe Entertainment District was created with the goal of revitalizing the area, which, in recent years, had stepped up the food options with spots like Tocabe, Chuey's and Torchy's Tacos. Troy Guard's Grange Hall will bring even more food and beer to the area in August. But with a June 27 soft opening, Pindustry is the first major addition to the entertainment district, and it's massive.

The two-story restaurant complex can hold up to 2,300 people, and has a 16,000-square-foot sky deck with Rocky Mountain views. It sits in the middle of a strip mall still being developed; Shake Shack, Starbucks and a certain Cherry Creek burger favorite that cannot yet be officially named are expected to be added to the area in the coming months.

Despite its less-than-interesting current surroundings, the interior of Pindustry is a grown-up play place jam-packed with arcade games, pinball machines, traditional and duckpin bowling, a dog-friendly beer garden where there will be live music on Saturday nights, games like cornhole and giant chess on the sky deck, two bars and a full food menu. 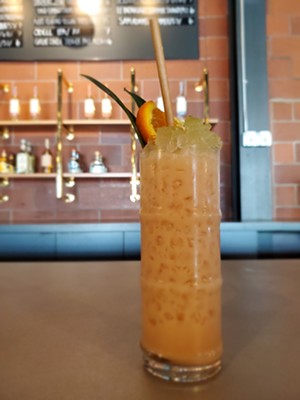 The Paradiso goes down (almost too) smoothly.
Molly Martin
Bob Koontz of Kelmore Development is behind the project. His commercial real estate company has been developing the southeast part of town, and Arapahoe Road specifically, for over a decade, though mostly adding retail and office spaces. Celebrity Lanes is the only project similar to Pindustry that Kelmore has done, "but this is geared specifically to younger adults," Koontz explains.

As is the case pretty much everywhere, hiring — specifically for the food portion of the business — has been difficult. "We have three people working in the kitchen right now," says Shannon Silva, sales and marketing director, "so we'll be opening with an abridged menu. But we're trying to be kind of fun about it. I even put some language on the opening menu saying, 'If you want a job....'"

That menu will include Neapolitan pizzas (which we've been seeing a lot of lately, at newcomers like Campfire in Evergreen and Benzina on East Colfax), salads, house focaccia bread and a burrata dish. Food trucks will be brought in to supplement the current offerings, and when Pindustry is staffed up, a full menu with options like charcuterie, sandwiches and toast with a variety of toppings will be added. You're not going to find typical bowling alley food like nachos or chicken fingers here.

What surprised us: The cocktails. Beverage director Micah Scott has created a cocktail menu that could rival that of most restaurants in town. The spirits list is heavy on bourbon, whiskey and rye, but the drinks run the gamut from a smoky mezcal and tequila concoction with freshly made ginger juice, pineapple, lemon and seltzer called the Howling Chupacabra to a rum and Campari libation with pineapple, coconut, lemon and cinnamon-bark tincture aptly named the Paradiso.

Other cocktails have playful names with a more personal meaning, like the chai-infused, whiskey-based Bob Father (a nod to Koontz) and the Nance (named after Koontz's wife). Another bonus: Cocktails are served on pellet ice — you know, like the stuff Sonic uses.

A grand-opening celebration is scheduled for the July 17 weekend. But you don't have to wait until then to grab a drink from the bar, take a seat on the sky deck and soak in the fact that Greenwood Village may now actually be a destination for fun.