The Mercury Cafe Meant Music to Me

Brandon Marshall
Just another night at the Merc.
Thanks for the memories, Marilyn. The music memories, especially. The Mercury Cafe was the nexus — the center of the universe — for the local music scene back in the 1980s, when I was fortunate enough to be hired as Westword’s first music editor.

At the time, punk and exciting indie bands ruled the underground, while Fleetwood Mac and Journey ruled the top of the charts, with hyper-commercialized “new wave” music (Synthpop? The guitar is dead? Gimme a break!) all over MTV. When I joined Westword, I promised to make the local scene a priority, because I thought it was pretty damn great.

Two clubs in particular were reliably booking local alt-rock bands instead of the cover groups and dance bands that some nightclubs featured: Walabi’s, on South Broadway, and the Mercury Cafe, at 1308 Pearl Street, around the corner from Wax Trax, the record emporium that still serves the music-buying community in spite of streaming and downloading.

There was such a concentration of music fans that hung out at Wax Trax during the day and the Merc at night that other cool businesses, like Fashion Disaster, put down roots in the area, and Wax Trax itself expanded on the block with sister shops. I bought my records at Wax Trax and also relied on the staff there — owners Dave Stidman and Duane Davis, and their incredibly knowledgeable staff (some who were in bands themselves) — for tips on noteworthy local and national music.

And many nights, I’d drive back to Capitol Hill and make my way to the Merc to see and hear the crème de la crème of Denver music across a kaleidoscope of styles: George Daniels playing boogie-woogie piano to engage the crowd during mealtime hours if I was early, and a creative explosion of groups such as Young Weasels, Aviators, Bop Street, Gluons, Rotisserie, Rock Advocates, Adada, Astrobeats, Rok Tots, Captain and the Red Hot Flames, Jinx Jones, The Trees, Bruce Odland Big Band, Astrobeats, Crankcall Loveaffair, Jux County…. 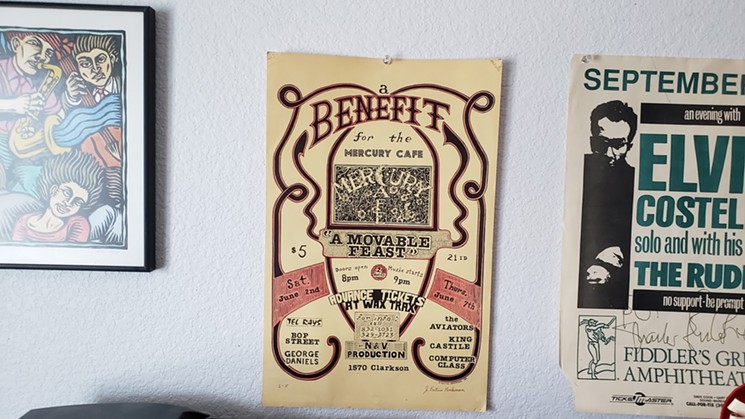 J. Festus Hockman illustrated this poster for the Mercury Cafe's music showcase, A Movable Feast.
Gil Asakawa
There were many more, and lots of acts got to play at other venues as time went on, but the Merc always felt like home base for the live music scene. It was a hangout, a description that I’ve heard used for the current location at 22nd and California streets. I wasn’t a big fan of every act, but I loved that Marilyn and her crew would be willing to book such a swath of local talent then, and ever since as well.

I also saw some totally cool national acts at the Merc, including (I swear) an all-ages matinee show of X blasting its proto-punk from the stage. I also saw a memorable “Paisley Underground” show with Green on Red at their GasFoodLodging second-album peak touring with the Dream Syndicate (and the Three O’Clock?).

Through it all, no matter the style of music or the frantic chaos that might be ensuing on stage, Marilyn Megenity was a calm, preternaturally placid presence in her club. Even when she had to find a new home and had to host A Movable Feast showcases of local bands in other venues to keep the Merc on the move before finding the California building in 1990, she was always a welcoming figure at the door, or going from table to table greeting customers as if they were all part of a tight-knit community. And they — we — were.

After a few months of attending shows at the Merc and handing over my cover charge ($2 maybe, back in the early ’80s?) to write about the music, Marilyn stopped me at the door and asked, “Are you Gil Asakawa?” I said yes, ashamed that my cover had been blown — must have been because I only drank coffee, even at 1 in the morning, and kept a notepad and pen handy at the back of the club. She always waved me in afterwards.

I always appreciated that, and I always appreciated Marilyn and the Merc’s presence as a foundation of Denver’s cultural community. I went to the new location, but my career took me other places after the decade, and I didn’t have the chance to go there much. I did see my friend Linda Maich perform her enchanting jazz-folk music there, and I attended one of the craziest weddings ever upstairs, of my friend and fellow Westworder Alan Dumas. The last time I was there was when Bruce Odland, a former local bandleader now living in New York City, and Ron Miles, an amazing jazz musician and teacher, invited me for lunch to discuss a wild performance and studio venue in Western Colorado that Odland was rehabbing because of its outstanding acoustics: An abandoned water tower, now called The Tank. It seemed like the perfect topic for a perfect healthy lunch at the perfect community center/club/cafe.

Thanks, Marilyn, for the memories. Thanks for being you, and for making this space that has allowed art to blossom for so many decades. May it continue to bloom under new ownership.