Johnny Iuzzini/Facebook
Iuzzini has been very quiet on social media since allegations came to light in 2017.
In 2019, uproar over a 2016 incident involving a then-girlfriend in which Texas-based chef Paul Qui was charged with assault (charges that were ultimately dismissed) led Avanti to pull out of a deal with the Top Chef alum. After a public apology that noted the steps he'd taken to make amends for his past actions, Qui got a second chance in Denver, opening Soy Pinoy at Zeppelin Station in July 2020.

That same month, chef Jacob Bickelhaupt began posting on Instagram about his new Denver pop-up restaurant, Konro. The Chicago chef had gained acclaim and two Michelin stars for 42 Grams, his high-end Windy City restaurant, before closing down following an incident in which Bickelhaupt was arrested for hitting Alexa Welsh, his ex-wife and then-business partner, over the head with a bottle in the restaurant parking lot. He eventually pleaded guilty to battery.

Now another chef whose big name has been sullied by accusations of bad behavior has come to the Mile High. New York City chef Johnny Iuzzini won the 2006 James Beard Award for Outstanding Pastry Chef during his time at Jean-Georges, and later became a television personality — first as the head judge on Top Chef: Just Desserts and most recently as the co-host of The Great American Baking Show. That series was canceled in December 2017, just days after a second round of allegations of sexual abuse and harassment came to light following reports dating back to his time at Jean-Georges that had first surfaced that November.

Iuzzini has been pretty quiet since then, but in May, he was hired as a restaurant management operations consultant for ChoLon Restaurant Concepts, a group led by local chef and restaurateur Lon Symensma that includes ChoLon downtown and in Central Park; LeRoux; and YumCha, which is set to open this year in the group's former Cho77 space.

In a statement shared by Boulder-based PR professional Kate Lacroix on her Facebook page, Symensma says, "While we generally do not comment on personnel matters, we do believe that it is important to make a statement. A couple things converged in our decision to engage Johnny.

After a brutal period trying to operate during Covid, we really needed to bring in a strong, motivated chef-driven individual with high kitchen standards to help us get our facilities and culinary operations back up to pre-pandemic levels. Most importantly, I worked with Johnny about 20 years ago in New York and hold his talents and abilities in high regard. I realize that he made some poor decisions in the past and do not condone such actions. I also believe in his sincere apologies and that individuals should be given a second chance to learn, grow and transform. With that being said, our company strives to make decisions based on the best interests of our employees and we hold our entire team to a high standard of accountability. We always aim to provide a safe and inclusive environment for our staff and guests." 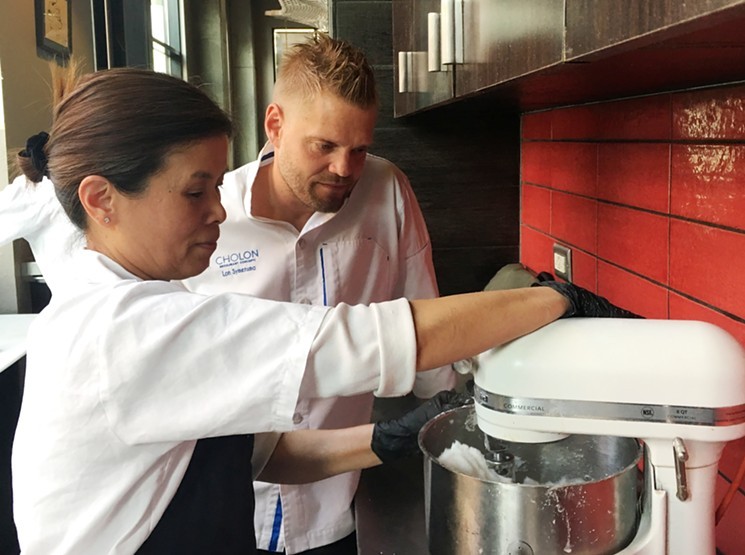 Lon Symensma and dim sum chef Michelle Xiao at ChoLon in Central Park.
Mark Antonation
In his statement, Symensma shared comments that Iuzzini had made on May 17, at an all-team meeting during his first week consulting:

"I am very excited to be joining the ChoLon Restaurant Concepts group. It is my goal to be able to share my experiences and skills to help the group grow while maintaining the highest level in every aspect of the company. I look forward to working with everyone and bringing positive energy and support in order to help each of you reach your potential and elevate each of the restaurants. And I look forward to learning from everyone here and continuing to grow and evolve.

"It is also important to me that I be honest and transparent with you. Many years ago, I made mistakes and acted unprofessionally by having relationships with co-workers in the restaurants I worked in. Several years after those relationships ended, they were made public. I understand how those women may have felt I had power over them as a colleague, and I regret not using better judgment at the time and keeping my personal life and professional life separate.

"I am deeply sorry that my actions caused hurt and a lack of trust. I also acted unprofessionally and immature by allowing my emotions to get the better of me, and tended to run my kitchens in the same way in which I was trained — using fear and intimidation, a brigade system. I have learned over time that this is not the best way to get the most out of your employees and colleagues.

"The only true way to lead a team is through kindness, respect, communication and support," Iuzzini concluded. "This is the example I intend to set and will continue to follow for all those with whom I work in this new position. I am humbled to be here with you and promise to lead and work day in, day out with integrity, honesty and transparency."

Westword reached out to Symensma to see if he or Iuzzini would like to provide additional comments, but did not receive a response. Still, it's clear that as Denver's culinary scene continues to grow, more big names are arriving from out of state — and some will be bringing more baggage than others.

Note: This story has been corrected to reflect the fact that the charges against Qui were dismissed.