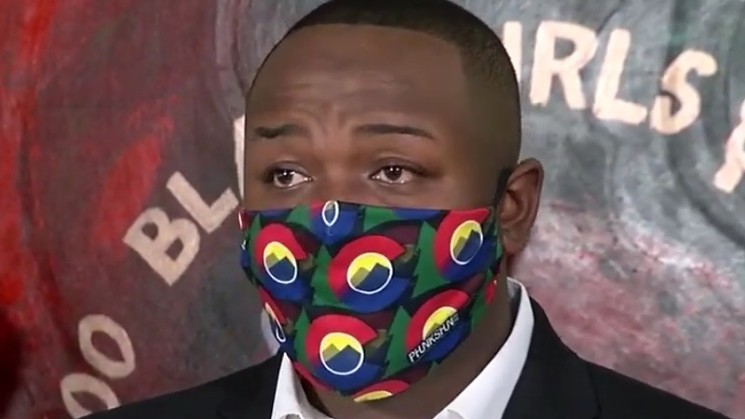 A June 29 article in local magazine Yellow Scene reported that Anderson's original accuser had recanted her assertions against him — and in a statement posted on Twitter at 9:18 p.m. last night, the 22-year-old Anderson expressed "a sense of gratitude and hope that the truth surrounding these allegations is becoming known." But the account of the recantation is far from definitive, and has already been updated. Moreover, the Denver School Board-sanctioned investigation into not just one, but more than sixty possible claims against Anderson, all of which he's denied, remains ongoing. According to Denver Police Department sources, no one has come forward to formally accuse Anderson of a crime.

Controversy has been swirling around Anderson for months. On March 26, Black Lives Matter 5280, an organization with which he'd previously collaborated, released sexual-assault allegations against him on behalf of an unnamed woman; he denied the accusations on March 28.

In the days that followed, Anderson acknowledged that a May 2018 Denver Public Schools investigation had found that he'd engaged in retaliation while advocating for Manual High School Principal Nick Dawkins, whom the district had investigated following employee complaints of harassment and bias. An accuser of Dawkins's told Westword that the retaliation took the form of social media posts aimed at her; she viewed Anderson's actions as harassment of a person who'd made claims of harassment.

In his response to these assertions, Anderson said, "Although I would have never intended for anyone to feel unsafe or uncomfortable around myself or others, I deeply apologize to the women-identifying members of NAC for the impact of my actions." This month, the Denver Classroom Teachers Association confirmed that it had learned of concerns about Anderson prior to the 2019 election when he won his school board seat, but ultimately supported his candidacy.

The Yellow Scene article, written by Shavonne Blades and Mona Cedillo, ran in excess of 6,500 words and covered a lot of ground. But its grabbiest element was the alleged recantation of Anderson's original accuser. The piece quoted at length from an April interview with the woman that was mediated by Mary Katherine Brooks-Fleming — who told a Colorado House committee on May 25 about an unnamed "predator" allegedly guilty of offenses ranging from "unwanted touching to violent acts of rape" against 62 individuals, a charge quickly linked to Anderson. The Yellow Scene article quotes the original accuser as saying that Anderson had raped her behind a trash can in 2017, when she was a high school senior and he was still in his teens.

But later in that piece, authors Blades and Cedillo reported that on June 13, "while conducting a follow-up call with the alleged 'Victim Number One,' YS was informed they were recanting and not moving forward with their statements." The authors called the accuser on June 25 to confirm that, and reported that "when asked, the accuser hesitated and stated, 'I would love to give you my lawyer’s number.' When YS requested the contact information for the attorney, they told YS they would take our number instead."

The passage made it unclear whether the accuser was having second thoughts about recanting — but more information was added in an update. The paragraph now says that "they no longer want to move forward pursuing that allegation 'for safety and support reasons.' They say they no longer have the support systems they did in the beginning" and "are disassociating themselves from Brooks-Fleming."

In a June 30 email to Westword, Blades writes: "I did speak to the alleged victim's attorney last night, but was not able to quote. Unless they change their mind again, the alleged victim is not moving forward with her statements."

The Anderson Twitter statement, issued prior to the update, focuses on the originally published text about the June 13 conversation. Here are his complete remarks:


Over the last few months, our community has been deeply divided over serious allegations made against me. I have been made aware of an article by Yellow Scene Magazine in which the individual who worked with BLM5280 to craft and present the original anonymous allegations was interviewed. Pursuant to this interview, Yellow Scene has this individual on record completely recanting their allegations.

The external investigation firm has been made aware of this article as a part of their investigation. I feel it is essential to reiterate what I said when I first met with these allegations: nothing can be more true than the realty that survivors of sexual assault who come forward to seek justice and healing are incredibly courageous and deserve all the respect in the world. We would all be wise to remember that my potential vindication from false allegations isn't a victory over survivors of assault, it's a victor for the truth and a space to consider how we may best move forward in supporting survivors and those falsely accused in true restorative and transformative ways.

While I feel a sense of gratitude and hope that the truth surrounding these allegations is becoming known, I recognize it is only the first step towards the healing that our community desperately needs. As the external investigation initiated by Denver Public Schools concludes in the coming weeks, I am committed to doing my part in helping our community move forward, rebuild trust and focus on what's most important to all of us: our students.

Both Anderson and his attorney, Christopher Decker, are quoted at length in the Yellow Scene item. Decker provided Westword with the following statement:


Director Anderson has always unequivocally denied the false allegations of sexual assault, which have now been recanted by the (still anonymous) woman who came forward to BLM5280 back in February of this year.

Today’s reporting in Yellow Scene accurately sets out a number of the important details surrounding the cacophony of concerns which has resulted from BLM5280’s decision to go public with these baseless allegations prior to even sharing them with law enforcement or Director Anderson.

Director Anderson continues to fully cooperate with the DPS independent investigation related to his time as a DPS employee and while serving on its Board of Directors.

Director Anderson has not been contacted by the Denver Police Department whatsoever regarding any questions, allegations, or requests for production. Should that occur, he will cooperate fully with law enforcement.

The current firestorm of concerns, false allegations, and attempts to manipulate the truth will eventually come to an end. When they do, the truth will be simple. Director Tay Anderson has not committed any crimes and has been subjected to an unfair rush to judgement. He has been the target of an insatiable desire to vilify a controversial young black politician before even having been charged.

“There is a higher law than the law of government. That's the law of conscience” — Stokely Carmichael

And here's the response from Denver Public Schools: "The DPS Board of Education is aware of an article in Yellow Scene Magazine and has shared it with the Investigations Law Group, which is looking into allegations of sexual misconduct for the Board. The Board will not comment on the details of the investigation until it is complete and the information uncovered has been fairly reviewed and analyzed."

We've also reached out to BLM5280 and Brooks-Fleming for comments.

This post has been updated to include a statement from attorney Christopher Decker, information about an update to the Yellow Scene article, a quote from journalist Shavonne Blades and statements from the Denver Police Department and Denver Public Schools.