So why name your beers after foods? And why follow suit with the label art?

"It's one of my favorite breakfast meals," explains Chris Marchio, who founded Knotted Root two years ago in Nederland after helping to pioneer a wave of popularity in New England-style IPAs at Fiction Beer Company and Joyride Brewing. "Specifically, corned beef hash, two sunny-side up eggs and rye toast, with ketchup...ate it every morning before high school with my buddies at the local diner." A New Jersey native, Marchio cherishes all things East Coast, from Vermont's breweries to Bruce Springsteen to the greasy spoon diners in Philadelphia.

"And I've always loved the Hormel can, so we decided to riff off of that. It's become a fun direction for me and is based on the notion that we take beer making very seriously while not taking ourselves seriously," he adds. 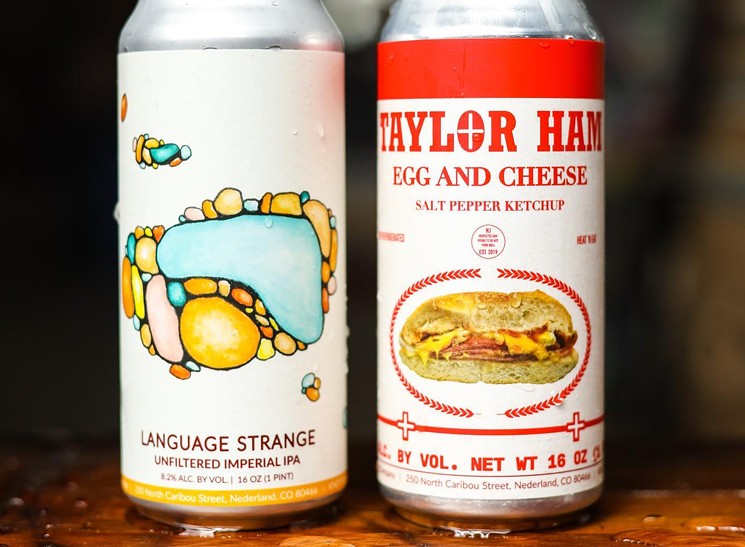 Knotted Root Brewing
This weekend, Knotted Root celebrates its two-year anniversary — and although there are no food beers on the menu, the brewery will release four different canned beers and two in bottles. There will also be live music, food trucks, new merchandise, a pig roast on Sunday and...yak rides.

The idea to name beers for food got its start in 2020, when Knotted Root debuted a double IPA called Squeeze Cheese, which was both a similarly named Kraft Foods product and a lyric from "Mango Song," a tune from Phish, one of Marchio's favorite bands. After that, it was Taylor Ham, Egg and Cheese, Salt Pepper Ketchup, another IPA with a label that was at once hilarious and difficult to mentally process. So difficult, in fact, that it's worth reaffirming the point that none of those of those foods are included in the actual beer recipe and that the beer does not, in fact, taste anything like Taylor ham, egg, cheese, salt, pepper or ketchup.

But breakfast sandwiches made with Taylor ham are a proud staple of New Jersey and "near and dear to my heart," Marchio says. "So it was originally part nostalgia and part joke." But the response to the label, from near and far, was so "incredible" that he intends to continue with food as inspiration for names and labels.

Knotted Root Brewing
For example, Marble Rye was a rye IPA that referenced food and an episode of Seinfeld, while Pastrami on Rye was an homage to Marchio's favorite lunchtime sandwich, pastrami on rye from Katz's Deli in New York City. Then there was Italian Spaghetti, a double-dry-hopped hazy IPA with Amarillo, Chinook and El Dorado; It's the Kung Pao (another Seinfeld reference); One Plain Slice, an IPA named for the old-school pizza joints of NYC; and In-N-Out of Focus, a hop terpene collaboration with New Image Brewing that inspired the tagline, "While no burgers were harmed in the making of this beer, a few have been since."

"We get asked all the time 'Does it taste like corn beef hash? Or pastrami? Or spaghetti?' We just chuckle and laugh and say, 'No, it tastes like a tasty hazy IPA!' People love it, so we'll keep doing it," Marchio says.

Other breweries across the country, most notably Brooklyn's Other Half Brewing, have named their beers for incongruous foods (some of Other Half's hazy IPAs include Cabbage, Broccoli, Cheddar + Broccoli, Chopped Cheese and Cream of Broccoli), but "our direction with the actual design is unique to us...and, you know, no one really has broccoli as a favorite food," Marchio points out. 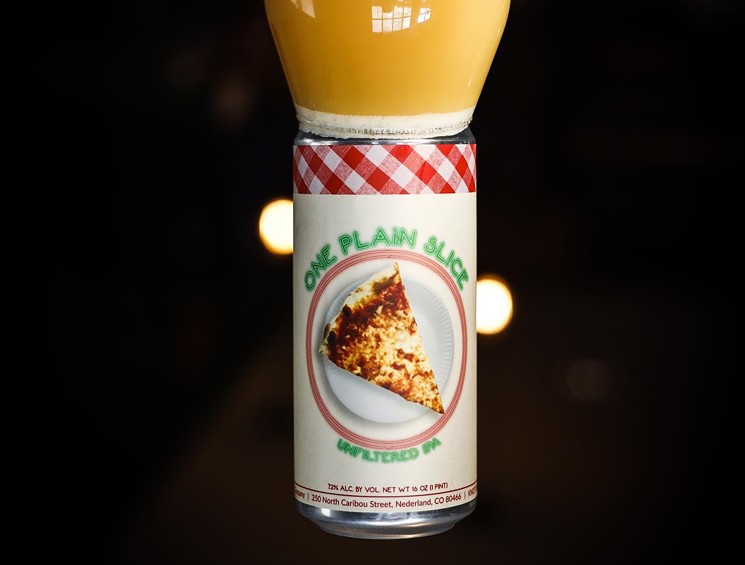 Knotted Root Brewing
A few of these designs, including Corn Beef Hash and In-N-Out of Focus, have probably flirted with trademark infringement, but Marchio says he doesn't worry about it. "If you change up portions of the label enough, it doesn't apply...unless they want to pursue it. Our basic premise is to change every aspect of the font to be individualistic to our brand, except for things such as "serving suggestion" "Est. 2019" or something like that.

"We use...stock photos, and then we can just be influenced by fonts and the organization of their products," he adds. "These trademarks are often applied to their specific products, too, in which case there is no confusion that we're not selling meat products in a can, I would hope. ...  In most cases, the designs are 100 percent original, too, and if we are influenced by someone, it is because we love their products, so it's an homage."

So what's next? "We kind of take these ideas as they come and weed through a lot of ideas that won't make the cut," Marchio says. "I've been eating a lot of shrimp cocktail lately, though, so you never know."