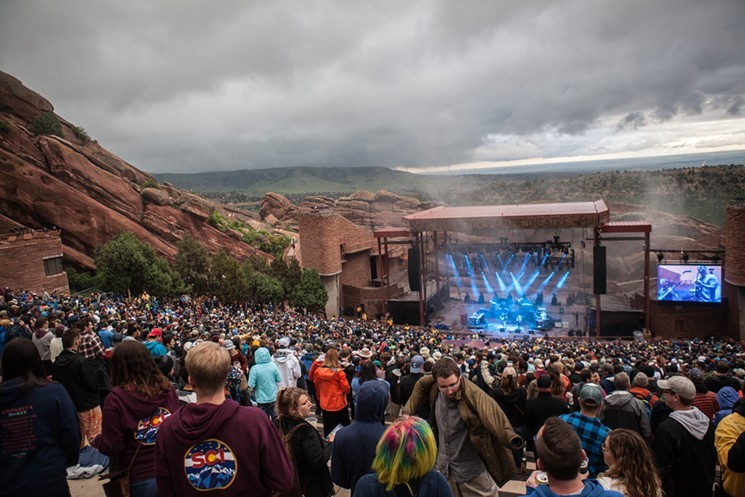 Jacqueline Collins
There's a new petition to raise the decibel level at Red Rocks.
Before Norwegian DJ Kygo’s June 24 concert, Red Rocks Amphitheatre posted to Twitter that people sitting above Row 40 should bring wired headphones and download the Mixhalo app, which lets people listen to a studio-quality mix of the show straight from the soundboard.

“No one wants this," tweeted one person. "We want louder music." Another posted: "I didn’t pay all this money for a silent disco. Also only compatible with WIRED headphones? It’s 2021 yo!” Not everybody was outraged. “Y’all realize this is optional right?" someone noted. "Like, you don’t have to do it.”

As word spread, music lover Jeff Jordan started a petition on Change.org dubbed "Repeal the Morrison/Red Rocks decibel limit," which has gotten more than 17,000 signatures so far, essentially asking the venue to raise the decibel level at concerts. He writes in the petition that for the past five years, music fans around the globe have left Red Rocks “wondering why the music is so quiet in a venue known for its acoustics. The reason is a noise/dB limit in the town of Morrison due to certain artists' use of bass along with certain residents' proximity to the venue.

“Recently, Red Rocks has suggested people bring headphones from home, to connect to their cell phones using an app that connects their phones to the music being played live. This is unacceptable. People pay great sums not only on concert tickets themselves, but on travel arrangements from the world round to attend these shows: Hundreds, if not thousands of dollars.”

Brian Kitts, director of marketing and communications for Denver Arts & Venues, the city agency that oversees Red Rocks, responded to the petition by writing, “While we appreciate the passion for both EDM and our venue, it’s inappropriate [to] make assumptions — which could easily have been checked with a quick phone call or email — and then turn them into a campaign of misinformation.

“Red Rocks continues to have the same acoustic quality that fans have experienced for more than eighty years. To be clear: No change has been made to sound limits at Red Rocks since 2016," he added. "At that time, and after months of study, decibel limits and curfews were revised (and, had nothing to do with sound ordinances). Hundreds of EDM and other artists have played the venue since then, and millions of fans have loved those shows — without the performers questioning or even coming close to the decibel limits. It’s dishonest to suggest that this process happens on an evolving basis. It just doesn’t.”

Not long after Red Rocks changed its sound limit restrictions about six years ago, a different petition, which got more than 20,000 signatures, was started, stating that the new restrictions unfairly targeted EDM events, “as these events tend to have large amounts of low frequency bass sounds that travel further than higher frequency sounds, thus being more present in the homes near the venue.”

In a 2015 Westword article, Kitts said, "There is a misconception that EDM is under attack, and the sound levels are going to be fifty percent of what they were last year, and that's just not the case. What you're doing is shaving off certain high points of the show, to the point that fans aren't going to notice.”

In his recent petition, Jordan wrote, "Now that Red Rocks shows have resumed virtually every night since its COVID restrictions were lifted, there is no reason why a Tuesday night show should be significantly quieter than a weekend show. Repeal/raise the Morrison noise ordinance. It's now detrimental to the Red Rocks experience we all know and love.”

Kitts writes that inviting fans to use headphones and the Mixhalo app above Row 40 didn’t have to do with sound quality at the venue; instead, it was a way to welcome the app to Red Rocks.

“Those lucky enough to attend Kygo’s show last week would’ve seen an invitation to test the Mixhalo app,” Kitts writes. “In an attempt to control the test and not interfere with the venue’s bandwidth, Red Rocks suggested the app was available to those above Row 40 — it’s as simple as that. Mixhalo is an optional enhancement to the fan experience; for those interested, it provides sound directly from the mix booth and soundboard to fans’ ears. At some shows, audiophiles can even tune in individual instruments, such as a lead guitar.

“Importantly, Mixhalo also has relevance for those wanting clearer sound who may have experienced hearing loss. Mixhalo has been embraced by Incubus, Metallica, Aerosmith, Pharrell Williams and others, and is an amenity at other venues including the Staples Center in Los Angeles.... Again, Mixhalo is for true music and tech lovers, and for those who aren't interested — it’s no different than a snack or beverage at Red Rocks: If you don’t want it, don’t get it.”