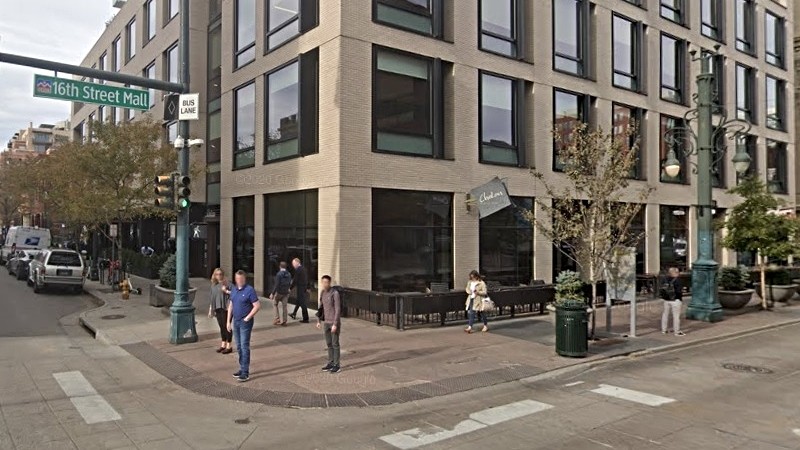 Google Maps
The corner of 16th and Blake, near where a shooting was reported early on July 19.
The festivities around last week's Major League Baseball All-Star Game were billed as Denver's coming-out party. But with that activity came another return: violence in LoDo and along the 16th Street Mall, recalling the extremely bloody July of 2020.

At 4:13 a.m. today, July 19, the Denver Police Department tweeted about a shooting on the 1600 block of Blake Street; a male was injured and transported to an area hospital with what are described as serious injuries. Less than 24 hours earlier, a triple shooting near 20th and Market streets left one person dead. There was also a double shooting on July 15 around 16th and Champa streets. And a week earlier, on July 11, a double shooting happened in the vicinity of 19th and Blake streets, two days before the All-Star Game.

No arrests have been made in any of these incidents.

Tensions downtown were high prior to the big game, particularly after the four guns-and-drugs arrests at the Maven Hotel near Coors Field on July 9. Authorities originally feared that the incident might have been a precursor to a Las Vegas-style attack on baseball fans, but subsequent evidence suggests it was merely an example of stupid criminals picking a terrible time and place to conduct illicit transactions involving meth and automatic weapons.

During a shooting a block away from the Maven two days later, at 19th and Blake, two people suffered wounds that weren't considered life-threatening. DPD sources subsequently told Denver7 that they suspected the gunplay might have been connected to gangs.

At approximately 11:45 p.m. July 15 on the 900 block of 16th Street, bullets again flew following what Denver Police called "an altercation." Original reports stated that three people had been shot, but after further investigation, the cops confirmed that the total was actually two — one juvenile female and one juvenile male. The third person was hurt during the dust-up that took place before triggers were pulled.

Then, at 3:15 a.m. on Sunday, July 18, the DPD revealed that officers were on the scene of a triple shooting at 20th and Market. At 8:49 a.m., the department tweeted that one of the victims, an adult male, had died. The event is being investigated as a homicide.

Counting the shooting early on July 19, that adds up to eight people shot and one dead downtown over an eight-day period.