From Racines to Rioja, Mike Gray's Rise Is a Restaurant Success Story 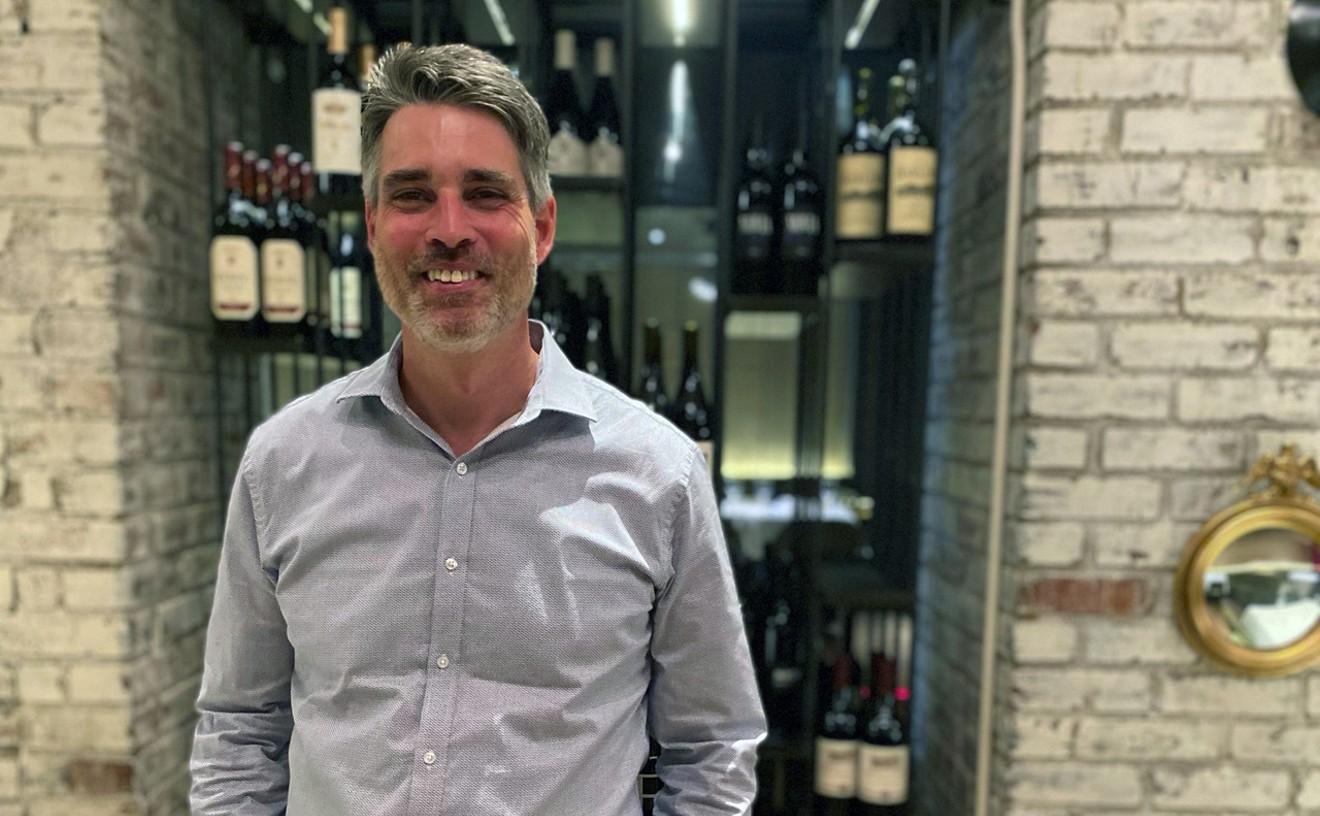 Matthew Brooks
Mike Gray has been working in the restaurant industry for decades and is now general manager at Rioja.
In a year of hardship, Mike Gray has found a new role in the hospitality industry, and he's thriving. During a time when the restaurant industry is facing serious staffing shortages, Gray's quick ascent from manager of an iconic casual eatery to general manager of one of the city's top fine-dining restaurants offers a refreshing success story and a reminder of the value that long-term members of the restaurant community bring.

He's also never done an interview with the media before. In his previous restaurant jobs, he stayed primarily behind the scenes. A longtime employee at Racines, Gray was there when the iconic Denver staple closed in 2020. He'd helped to open the 745 Sherman Street location in 2004, and managed the restaurant for almost sixteen years, with a two-year move to the mountains in between.

But March 16, 2020, marked the end of an era as Racines had its final day of service after longtime business partners Lee Goodfriend and David Racine moved along with plans to sell the property, though the closure came about earlier than anticipated because of COVID-19.

“It was sad to see such a big, empty restaurant, which had flourished for so many years, close,” Gray says. He spent time helping shut down Racines, donating shelf-stable food to pantries, attending to outstanding balances and figuring out what to do with the inventory of alcohol.

Gray helped manage Racines on and off for almost sixteen years.
Larry Laszlo
Then he began searching for work. But despite his 33 years of restaurant experience, the job market was tight last summer. “It was hard to land an interview,” Gray explains, noting that sometimes he'd fill out online applications for positions for which 150 people had already applied.

A connection through a friend landed him at Rioja, at 1431 Larimer Street, a restaurant known for its elevated Mediterranean food. Chef/co-owner Jennifer Jasinski won the James Beard Award for Best Chef Southwest in 2013 and was a semi-finalist in the Outstanding Chef category in 2016. (The restaurant is also on Westword's list of 100 Best Denver Restaurants for 2021.) Gray describes Rioja as a place where people go to celebrate special events with a fine-dining experience.

After just nine months in training, he was promoted to general manager and is working to rebuild the restaurant as dining attendance continues to grow. “Racines had a much more casual atmosphere. We served breakfast, lunch and dinner, American fare,” he explains. “We were extremely busy. We could seat 400 people, counting the patio."

Learning the ropes of fine dining wasn’t a completely new experience for Gray, however. He had worked at the Beaver Creek Chophouse at Beaver Creek Resort for two years in the early ’00s, but there was still a learning curve. At Rioja, Gray was introduced to food, ingredients and plating techniques he had not worked with before. He's particularly inspired by the attention given to detail, such as the handmade pastas and the seasonal menus that Jasinski develops.

“I’ve really relished this opportunity to learn more,” he says. “There’s lots of similarities between [Racines and Rioja]. They both have committed, well-known local owners who work shifts alongside you and interact with their guests on a daily basis. It’s been pleasant to work in that type of atmosphere.”

Rioja is a fine-dining restaurant in Larimer Square that specializes in Mediterranean cuisine.
Jennifer Olson
He also embarked on a wine-tasting tour of Rioja’s collection of at least seventy varietals, the majority of them from Spain. “Spanish wine has gained much more recognition in the last ten years or so,” Gray notes. “People are seeing the value in Spanish wines for the price point, the drinkability, and the ability to pair with many types of food.”

When he started at Rioja in September 2020, there was a 25 percent limit on indoor capacity, and seating was primarily outside on the patio. As winter took hold, the majority of dining was still on that patio, but inside a tent, which presented its own challenges. Gray navigated not only keeping customers warm, but also ensuring that meals stayed hot on the journey from the kitchen to the semi-outdoor tables.

During that time, Rioja was able to employ only a small staff, and Gray did everything from managing to hosting to dishwashing to bartending. Currently, he’s finding it a challenge to hire enough staff to completely move on from covering other positions, but he’s hopeful the restaurant is on a good path. “I’m looking forward to the day when [Rioja] is fully staffed, and the guests are happy, and I’m not wearing quite as many hats,” he says.

In the meantime, the best part of the job is seeing friends from Racines, getting to know Rioja’s regulars and having conversations with new guests. Says Gray, “I really like meeting people from all around the world and all around the country.”