At Casey Brewing & Blending, Lager Runs in the Family

Casey Brewing & Blending
"If you told me even a few years ago that we'd be making lagers one day I would have laughed." That's how Troy Casey phrased his Facebook post last April announcing that his Glenwood Springs brewery, Casey Brewing & Blending, had tapped a German-style helles for the first time ever, as part of an upcoming series of planned new lagers. "But here it is."

Why the laughter? Because Troy got his start in 2008 brewing lagers at AC Golden — Coors Brewing's small-batch incubator, which is located inside its massive Golden plant — before leaving after five years to start his own place. Since then, Casey Brewing has focused primarily on producing and blending wild and sour ales made with Colorado fruit — which is about as far from lager brewing as it gets.

But lager runs in the Casey family blood: Troy's father, Greg, has a Ph.D. in microbiology and food science and spent more than 35 years working in quality control and research and development for Anheuser-Busch, Red Star Yeast, Stroh's and then Coors, where he was employed from 1999 until he retired in 2013. Today, Greg is working on a three-volume set of books about the history of American lager. The books will include information about how German brewing traditions came to the U.S., ingredient shortages during and after World War II, and how the U.S. avoided strict rules on lager ingredients. 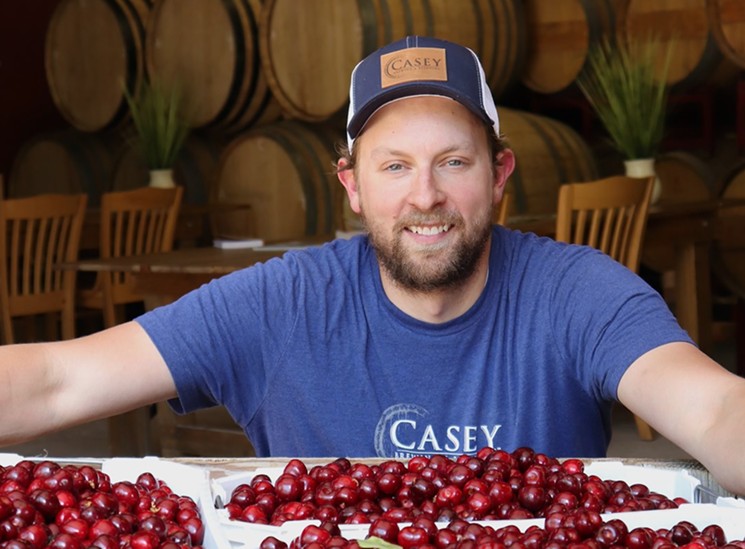 Troy Casey
Casey Brewing & Blending
"I've learned many things from my dad about lager fermentation, so while he and I never really talked about recipes, the knowledge I gained from him about how to make yeast happy and make clean fermentations is felt in every sip of our Helles and Pils," Troy says.

"When I started at Coors, lagers were my first passion," he continues. Troy and his colleagues were also very good at making them, winning seven Great American Beer Festival medals in just five years for their German-style pilsner, a dunkel, a schwarzbier and Colorado Native, AC Golden's signature amber lager.

While he was there, though, Troy began working on his second passion, wild and sour ales, pioneering a program at AC Golden that quickly gathered acclaim for its small-batch releases. "We had no idea what we were doing. We just knew that we liked those beers," he told Westword in 2013.

When he first opened Casey Brewing, Troy didn't even have his own brewing equipment. Instead, he hired other local breweries to make unfermented wort, which he then fermented into beer in both wooden barrels and stainless-steel tanks at his own facility. When he did finally buy a brewing system in 2018, he had it custom-built to allow for decoctions, an old-world process that calls for separating a portion of boiling barley at least once during brewing, then boiling it at an even higher temperature in order to extract more flavor before adding it back in. While decoctions are mostly done in lager brewing, Troy planned to use them for making spontaneously fermented (meaning they are fermented with naturally occurring yeast and bacteria) sour and wild ales, which like the turbid setting that decoctions provide.

Casey Brewing & Blending
But he was never happy with the results of that project and recently shut it down, deciding instead to put the equipment to work making lager. "I made space for a couple lagering tanks and started digging through recipes I hadn't opened in over eight years," Troy says. "The Helles is lagered for eight weeks with a single decoction. Our Pils is double-decocted and lagered a similar amount of time."

In addition, Troy decided to start canning his lagers, as well as all of the brewery's IPAs, which will make it easier to distribute the beer and to sell it to go at the brewery, an integral part of the business that became essential during the height of the pandemic and continues to bolster business now.

"Making the switch to cans was based on consumer preferences. It will drop the cost a bit, and we hope to do a little more volume in that format as well," he adds. And while his lagers may not make it into his dad's books, they will certainly help form the next chapter for Casey Brewing.