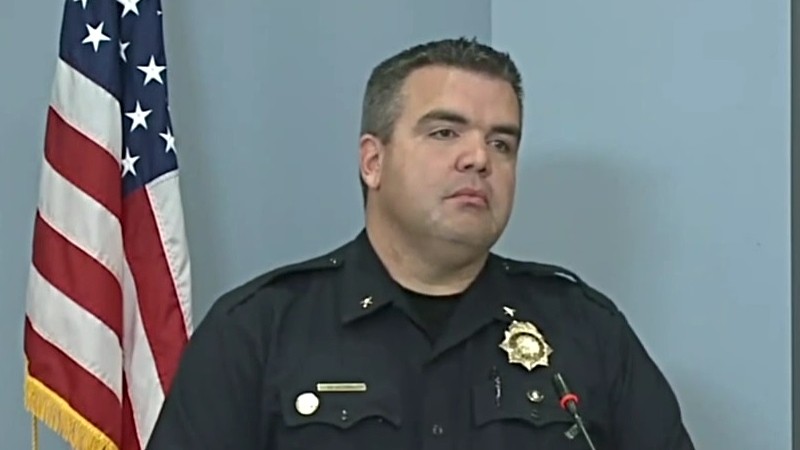 Denver Police Department
Major Crimes Division Commander Matt Clark addressed the media at the August 19 press conference.
During an afternoon press conference on August 19, Denver Police Chief Paul Pazen and Major Crimes Division Commander Matt Clark offered an update on the investigation into a crime spree late on August 17 that left eighteen-year-old student Shmuel Silverberg dead and another individual clinging to life. Four arrests have been made to date, and a warrant has been issued for Samuel Fussell, eighteen.

Silverberg was a student at Yeshiva Toras Chaim Talmudic Seminary of Denver, at 1555 Stuart Street. "Yeshiva is special to us," Pazen said. "I was there at the grand opening and have spoken to these kids before — and we want nothing more than for them to go about their studies in a safe way."

He added that Silverberg's slaying "sent shock waves through the Orthodox Jewish community not only here in Denver and the state of Colorado, but the United States and the world. We again share our condolences with the Silverberg family and the school."

During the press conference, Pazen decried "this horrific series of crimes. ... This crime spree was appalling."


LIVE: Investigators Provide Update on the Arrest of the Suspects involved in the Aug. 17th Crime Spree #Denver https://t.co/60xCyFYcke

In his portion of the presentation, Clark outlined a series of acts that investigators believe were committed by Fussell and the four arrestees — and noted that a sixth crime had been added to five offenses listed on August 18. Here's the timeline for late August 17 and early the next morning:

• 10 p.m.: A 2020 blue Toyota Camry was stolen at gunpoint on the 2700 block of West Alameda Avenue.
• 10:50 p.m.: A 2018 maroon Honda CRV was stolen in the vicinity of East Colfax Avenue and Grape Street. The victim in this incident was also threatened with a firearm.
• 11 p.m.: A business was robbed on the 1300 block of East Colfax (the previously unrevealed crime).
• 11:10 p.m.: An adult male was robbed and then shot in the area of Colfax and Lafayette Street. Clark said the victim remains in critical condition but is expected to survive.
• 11:35 p.m.: Silverberg was shot outside the Yeshiva seminary. According to Clark, he was able to get to a location inside the school before collapsing.
• 12:30 a.m.: A business was burglarized on the 1000 block of South Union Boulevard in Lakewood, during which a 1998 gray Toyota RAV4 was stolen.

The four arrestees were subsequently traced to two separate residences — one on the 3200 block of West Oxford Avenue in Sheridan, the other on the 1300 block of South Umatilla Street in Denver. The arrests were made without incident by members of SWAT teams from Denver and Arapahoe County, Clark said. The Camry and the CRV have been recovered, and officers are still looking for the RAV4.

During a question-and-answer session, Clark stressed that in interviews with arrestees, no information emerged to suggest that Silverberg was targeted because of his religion. However, if evidence to that effect surfaces, charges of bias-motivated crime could follow, he noted. The case is expected to be submitted to the Denver District Attorney's Office next week. Additionally, Clark appeared to confirm that the suspects met while serving time in the state's Youthful Offender System and alluded to the possibility that one may have been named in an active escape warrant.

The final words went to Pazen. "We don't know the exact motivation" for the crimes, he conceded, "other than senseless violence at multiple locations throughout our city and throughout the metro area. The fact that we have a group of relatively young individuals who are willing to go on this type of rampage, this type of violent spree in our community, is not acceptable, and we as a community need to stand up together to make sure it doesn't happen in the future."

Anyone with information about Fussell's whereabouts or any other aspect of the aforementioned crimes should call Metro Denver Crime Stoppers at 720-913-STOP (7867). Fussell is considered to be armed and dangerous.