Susan Froyd
Frankie Toan and Therin Zimmerman make themselves comfortable at Rainbow Dome Central.
Friends and artist collaborators Frankie Toan and Therin Zimmerman are not seasoned roller-skaters, but after putting their heads together to envision a fun and friendly permanent experiential art space (they’re not quite sure about using the term “immersive”), they are starting to learn the ropes of skating while beginning to realize the project they call Rainbow Dome.

Toan and Zimmerman are now deep into plotting the logistics for the Dome, an art-splattered wonderland of a rink that will welcome skaters of all ages and skill levels. Right now, they're creating decorations and functional pieces, such as whimsically painted rink bumpers to slow down skaters in danger of spinning out of control, in a rented warehouse in Valverde. But they are also hot on the trail of a spot where they can first introduce the concept as a pop-up, while working up to an established home.

How did they settle on a roller rink? Toan explains that as members of the Secret Love Collective, an artist group known for creating safe installations where the queer community and allies could come together as peers without fear of violence or bias, they starting talking about extending the idea of a safe place for all communities to mingle a few years ago.

The two considered their options, asking themselves what their idea of using art to build community would even look like. What kind of a curated aesthetic would have a universal appeal? Maybe roller skating?

“Roller skating is something that people can understand,” Zimmerman says. "And Denver has a huge skate community.” As they mulled that over together, a roller rink began to feel like a foolproof environment for mixed-up communities to play together without conflict. 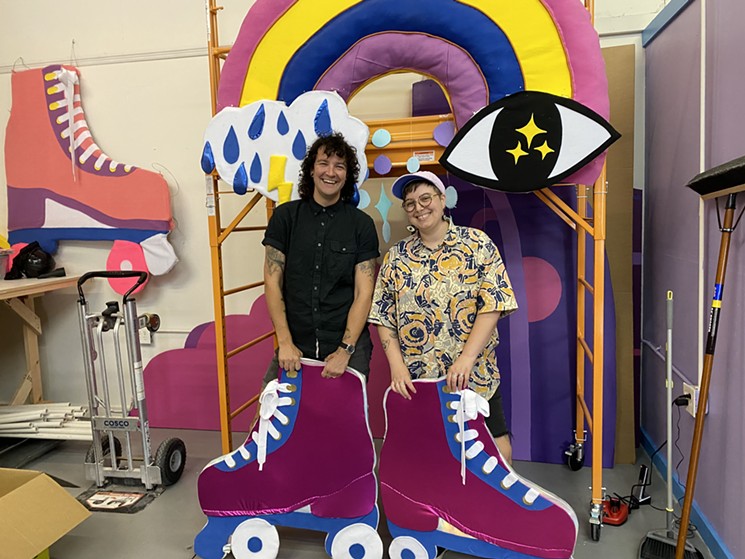 Toan and Zimmerman stand in front of a Rainbow Dome work-in-progress.
Susan Froyd
To learn more, they met with Afton Hill of Denver Skates, an organization offering lessons and planning events for local skaters, and signed up to learn the basics.

“People don’t have to be advanced skaters to have fun,” notes Zimmerman. “You can still go on an adventure by experiencing sober, action-based events offering alternative nightlife, family nights, fashion shows or performances.”

They confide that they learned a lot about the business of the tailored art experience as flies on the wall while working on separate projects for Meow Wolf’s soon-to-open attraction Convergence Station.

“It’s the business model for new, unique spaces,” Zimmerman says. “They have an immense amount of material knowledge at this point as a continuous work-in-progress. We’ve been learning about fire code and other parts of the business.” They also took a small-business course.

During a recent visit by Westword to the colorful Rainbow Dome warehouse, Toan pointed out some shelves loaded down with several unopened cartons, explaining, “We just bought 425 pairs of roller skates in different sizes.”

Yes, the partners are serious in their quest. They’ve done their homework with the aforementioned business course and registered their business with the state. They found a realtor to work with as they hunt down viable spaces for pop-ups and — the final step — a permanent home for Rainbow Dome.

And, notes Zimmerman, they’re hard at work creating their own Rainbow Dome merchandise. “We’ve been tie-dyeing socks for merch sales,” she says, pointing at supplies spread out on a work table. With their DIY skills, she adds, the possibilities are endless (Zimmerman has been designing and selling enamel pins, stickers, prints and cards for years, and Toan makes soft sculpture that’s often symbolic and whimsical). A merch shop is already doing time as part of their fundraising plan.

Zimmerman and Toan haven’t quite been able to pin down a time frame for each step of their business plan.

“It’s tricky,” Zimmerman says. “A permanent space is still an unknown and could take up to a year to finalize.”

While things continue to percolate, Toan and Zimmerman decided to host an open house this weekend at the warehouse to test the waters and let curious folks know more about their plans. They hope to be able to host pop-ups in September and October, and perhaps for the holiday season.

“We hope to have semi-regular pop-ups, but we see how complicated it really is," Zimmerman says. "For a community art event, making space is difficult. That’s the main issue with DIY: a whole history of seeking a forever space for free.”

Still, they toss around ideas: “Maybe a rink could host a pop-up, and we charge admission?” Zimmerman muses. And they have a few solid leads on empty or flexible spaces for the pop-ups.

“We care,” adds Zimmerman. “We’re invested in the community here. Fun is our priority.”

In the meantime, the pair is glad to have a great working relationship. “We complement each other well. We’ve got a good business partnership,” Zimmerman concludes. “It’s amazing what a gift that is.”

Visit the Rainbow Dome warehouse, 2600 West Second Avenue, Unit #10, during an open house and art sale on Friday, August 27, from 5 to 9 p.m., and Saturday, August 28, from 10 a.m. and 4 p.m. Admission is free, and a limited number of free drink coupons from the neighboring Colorado Cider Company will be given out, first come, first served. The fabrication space is not large enough for skating, but there will be a fun photo booth. Masks are mandatory for safety purposes. RSVP at Eventbrite. Learn more at the website or on Instagram.