Inside Lawsuit Over Controversial Police Killing Officer Turned Into a Joke

Family photo/haltzmanlaw.com
A portrait of the late John Pacheaco Jr. and a photo of the truck in which he was shot on Halloween 2020.
Late on Friday, September 10, a lawsuit was filed over the Halloween 2020 killing of John Pacheaco Jr. by two Glendale Police Department officers, Neal McCormick and Chandler Phillips — an incident the latter turned into a joke by way of a (now-deleted) social media post about being stuck on desk duty during the inquiry into the shooting. Superimposed over a photo of Phillips wearing a supposed-to-be-comic frown on his face is an image of actor Mark Wahlberg from the 2010 movie The Other Guys declaring, "I'm a peacock! You gotta let me fly!"

Matthew Haltzman of the Fort Collins-based Haltzman Law Firm, who represents Pacheaco's estate, argues that "Officers Phillips and McCormick’s reckless creation of any danger, followed by their unreasonable use of deadly force after such danger had vanished, coupled with inadequate training and supervision by the Glendale Police Department, ultimately led to and caused the officers to violate the department’s use of force training, as well as Mr. Pacheaco’s rights under the Fourth Amendment to be free from the unreasonable use of deadly force, ultimately resulting in his murder."

The sequence of events that led to Pacheaco's death started just prior to 10 p.m. on October 31, when an allegedly stolen Dodge pickup truck driven by Pacheaco came to a stop on Colorado Boulevard not far from the Alameda intersection.

A few minutes later, with the truck still stationary, Officer Bradley Reed, who is not named as a defendant in the complaint, pulled up behind it. Shortly thereafter, units driven by McCormick and Phillips "arrived at the scene and 'pinned' Mr. Pacheaco's vehicle in between two police vehicles that were parked in front and behind Mr. Pacheaco's vehicle, while Mr. Pacheaco remained unconscious," the document states. "Officers then began shining flashlights into the windows of Mr. Pacheaco’s vehicle and attempted to awake Mr. Pacheaco."

As a result of these actions, the account continues, "Mr. Pacheaco, who was disoriented, awoke and removed his foot from the vehicle’s brake. This caused the vehicle to move slowly forward approximately one foot and contact the front bumper of the unoccupied police vehicle in front of him. Mr. Pacheaco then moved the shifting mechanism in the Dodge."

At that point, McCormick and Chandler are said to have "opened fire on Mr. Pacheaco at close range, firing nineteen rounds from two semi-automatic firearms at and into the vehicle. Other more senior officers on scene, standing in close proximity to the Defendant Officers, did not fire their weapons. After bullets fired by the Defendant Officers caused catastrophic injuries to Mr. Pacheaco, including lacerating his spinal cord, Mr. Pacheaco’s foot came down on the gas pedal of his vehicle and the vehicle accelerated backwards,
striking the unoccupied police vehicle behind him and pushing it."

No body-worn camera footage of the incident exists, since Glendale officers weren't required to don such devices at the time of the shooting — and neither were their vehicles equipped with cameras. However, attorney Haltzman obtained two videos that captured what went down. The first is a brief cell-phone recording showing officers advancing with guns drawn:
The second video consists of surveillance footage that shows the truck entering the frame at around the 4:40 mark, when police arrive. The truck begins moving at about 9:50 into the video, after which triggers are pulled:
The issue of police shooting into moving vehicles was central to a March 2019 Westword article about Chayley Tolin, who sustained life-threatening injuries after cops began blasting away at her stolen ride in a Swedish Medical Center parking structure in Englewood during a busy morning, when employees and patients were rushing to work and appointments. 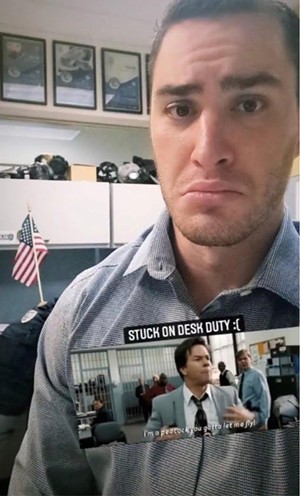 Glendale Police Officer Chandler Phillips's social media post about being placed on desk duty amid the investigation into the fatal shooting of John Pacheaco Jr.
haltzmanlaw.com
Weighing in on this practice was Chuck Wexler, executive director of the Washington, D.C.-based Police Executive Research Forum (PERF), a nonprofit, independent policing think tank. In his view, such shootings unnecessarily risk the lives of cops, suspects and bystanders, often over car theft, which is viewed as a relatively minor crime. "Almost no one even goes to jail for stealing a car anymore," Wexler pointed out.

PERF's mandate against shooting into a moving vehicle isn’t a radical new theory. Wexler noted that it has been “the gold standard, one of the guiding principles in the use of force, for more than forty years. Yet there are still departments that haven’t changed this policy" — including Glendale. Denver has, however: The DOD changed its policy following the January 2015 death of seventeen-year-old Jessica Hernandez, who was behind the wheel of a stolen car when officers started shooting.

Denver officials subsequently paid Hernandez's family a settlement of just under $1 million and pledged to institute other changes intended to prevent such a tragedy from occurring in the future. Today, DPD officers can no longer justify shooting by claiming that the car itself was a weapon — and Pacheaco was otherwise unarmed when the Glendale cops killed him.

Nonetheless, Denver District Attorney Beth McCann announced in May that she wouldn't press criminal charges against McCormick and Phillips. In her words, "Mr. Pacheaco was stopped in a traffic lane blocking traffic on South Colorado Blvd. When officers tried to speak with Mr. Pacheaco, he unexpectedly put the truck in reverse as an officer was running behind the truck, clipping the officer and almost pinning him between the truck and a police car when these officers discharged their firearms. At the moment they shot Mr. Pacheaco, these officers reasonably believed that their fellow officers were in danger of being killed or receiving serious bodily injury."

Haltzman doesn't buy this logic. "The egregious and unjustifiable use of force by Officers Phillips and McCormick is symptomatic of a broader culture in law enforcement that tells officers to shoot first and ask questions later," he contends. "The video evidence already available in this case shows that no officer was hit by or endangered by Mr. Pacheaco before nineteen bullets were fired at him."

He adds: "We are committed to getting justice for John and holding the Glendale Police Department and these officers accountable for their violations of the Fourth Amendment and Colorado law by filing this lawsuit."

We've reached out to the Glendale Police Department for comment on the lawsuit. To date, the department has taken no disciplinary action against Chandler and Phillips in regard to the shooting — but a spokesperson did apologize for Phillips's social media post last year.