Molly Martin
Get a couple of brown butter chocolate chip cookies for the road when you stop at the Craftsman.
For a few blissful weeks in late September and early October, Colorado turns golden as the aspen leaves change color — marking the often short but very sweet peak of fall weather. Now is the perfect time to head into the Rockies for a day of leaf peeping. But as you drive up Guanella Pass or along the Peak to Peak Highway, you could find yourself getting very hungry. 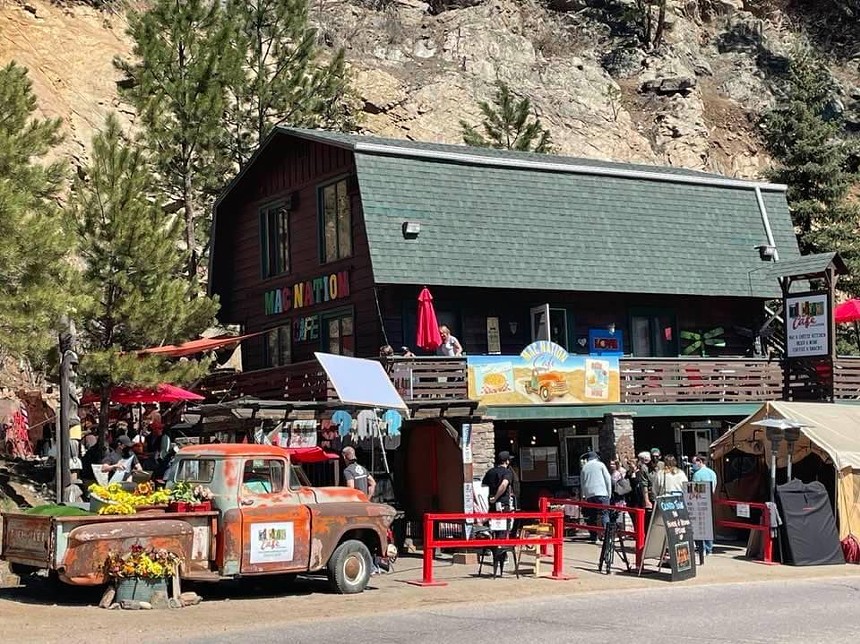 Mac Nation/Facebook
Mac Nation
5510 Parmalee Gulch Road, Indian Hills
mac-nation.com
Approximate distance from downtown Denver: 30 minutes
Located just west of Red Rocks between Morrison and Evergreen, Mac Nation is ideally situated for catching fall colors in early October, after the peak season has passed farther west. And after a day of hiking and taking in the views, it's supremely satisfying to be served a hot aluminum pan loaded with comfort food: The menu is devoted entirely to variations on mac and cheese. This cozy spot with a multi-tiered patio was opened in 2015 by Alton McCullough; her mom, Kiki Frisbie, chipped in with the interior design. The result is cheery, colorful and cluttered, with mismatched chairs and cafe tables spilling out from the compact dining room. There are over forty topping combinations priced from $8 to $16, nearly all of them named for U.S. cities and states — hence the Mac Nation name. Each order is built with rotini (a fine substitute for elbow mac, since the coils hold more cheesy sauce) and topped with regional ingredients from around the country. Can't decide? Opt for a flight with three mac-and-cheese picks for $12. Parma Trattoria & Mozzarella Bar/Facebook
Parma Trattoria & Mozzarella Bar
1132 West Dillon Road, Louisville
parmamozzarellabar.com
Approximate distance from downtown Denver: 30 minutes
A different kind of cheesy pick-me-up awaits in Louisville, where one of the first mozzarella bars in the state (there's also Bacco Trattoria & Mozzarella Bar in Boulder) is located just off U.S. Highway 36, making it a great stop for anyone trekking to or from the Estes Park area. On weekends, it opens at 3:30 p.m. for dinner, and serves lunch from 11 a.m. to 2 p.m. Monday through Saturday. While Parma has a full menu, the real draw is the mozzarella bar. You can choose any combination of cheeses (four types of mozzarella, including burrata) and cured meats such as duck prosciutto and spicy Calabrese salami, along with condiments like green tomato marmalade and marinated zucchini. If you've really worked up an appetite, dive into the pizzas and pastas, then head home knowing that you'll sleep very well. 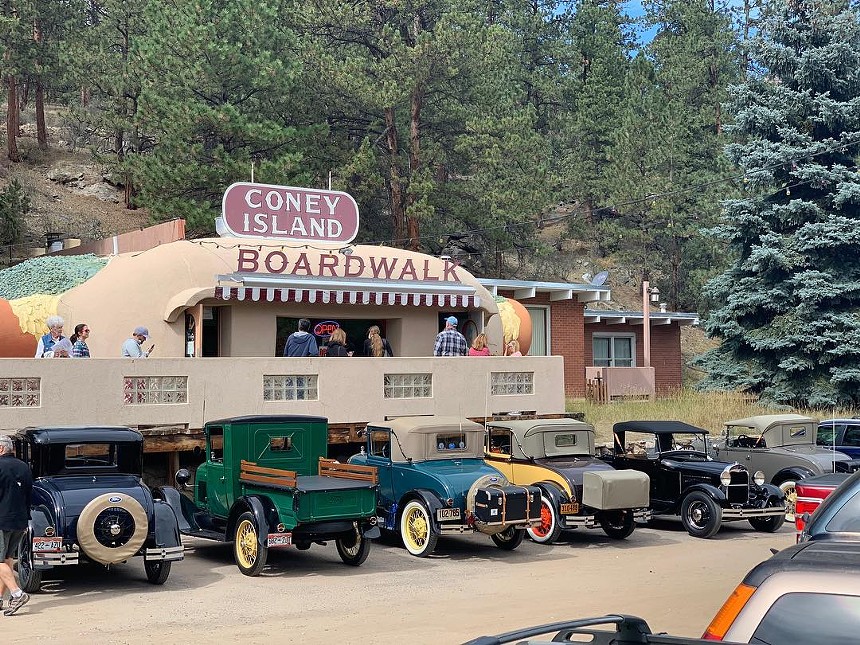 Shakes and hand-cut fries await at this iconic hot dog.
Coney Island Boardwalk/Facebook
Coney Island Boardwalk
10 Old Stagecoach Road, Bailey
Approximate distance from downtown Denver: 1 hour
How did a hot dog-shaped restaurant end up in a small mountain town just east of Kenosha Pass, a prime aspen-viewing destination? The history of Coney Island is as long as the giant weiner itself, dating back to 1966, when the original structure was built on West Colfax Avenue. In 1970 it was moved to Aspen Park, and then in 2006 was relocated to its current home. The last owner, Ron Aigner, had tried to sell the building before putting the whole parcel up for sale. In 2016, it was purchased by John D. Wallace, who kept the hot dog in Bailey. It was placed on the market for $1,500,000 earlier this year, but has not yet sold; it reopened in late August under new management, so make a pit stop (while you still can). The casual mountain cookhouse is a great comfort food stop.
The Shaggy Sheep/Instagram
The Shaggy Sheep
50455 U.S. Highway 285, Grant
the-shaggy-sheep.com
Approximate distance from downtown Denver: 1 hour
For six years, the husband-and-wife team of Chris Howe and Sarah Bennnett have been serving comfort food from this casual spot that's just minutes from Guanella Pass and is currently open for breakfast and lunch Thursday through Monday. Swing by early for a smothered burrito or French toast, or stop on your way back to town for burgers, green chile and a cocktail. It also operates its Airstream Snack Shack, which serves sandwiches, ice cream, cold beers and more, through October (or as long as the weather holds out). The food at Carniceria La Perla is made with care.
Eva Jee
Carniceria La Perla
1161 Blue River Parkway, Silverthorne
Approximate distance from downtown Denver: 1.25 hours
Carniceria La Perla operates as part of Mercado La Perla, a Mexican market perched along the west side of Route 9. It opened in Silverthorne more than twenty years ago as a tortilleria and liquor store. Now it’s run by co-owners Efrain Adame and Santiago Rodriguez, who are both originally from Mexico and have worked in restaurants along I-70 for many years. It serves flavorful, affordable Mexican like tacos, burritos and tortas, plus you can load up on extras at the self-serve salsa bar. Tin Plate Pizza/Facebook
Tin Plate
110 South Ridge Street, Breckenridge
tinplatepizza.com
Approximate distance from downtown Denver: 1.5 hours
If you'd rather skip hiking in favor of a shopping trip down a quaint main street while you enjoy the fall colors, Breckenridge is the place to be this time of year. And the place to eat is Tin Plate, a restaurant that debuted last June in a restored mining cabin. The 1883 building was home to the town’s gold assayer and is where Colorado's largest gold nugget, Tom's Baby, was kept overnight before being moved by train to Denver. Today the pizza is the real treasure here. Pies are made on sourdough crust using locally milled flour and run the gamut from traditional cheese, pepperoni and sausage to a pineapple pancetta version or the elote, topped with corn, roasted poblanos, goat cheese, Tajín seasoning and lime-pickled onion. Pro tip: Order your pie with a side of chile-infused Björn's Colorado honey. The Nashville hot chicken sandwich at the Craftsman is worth a pit stop.
Molly Martin
Craftsman
56 Edwards Village Boulevard, Edwards
craftsmanvail.com
Approximate distance from downtown Denver: 2 hours
Located just west of Vail, where you can take a fall-hued gondola ride through October 1, this eatery serves up some of the best sandwiches in the state. Owned by the husband-and-wife team of Christopher and Janelle Schmidt, Craftsman is known for putting its own spin on classic sandwich staples. The Philly, made with shaved ribeye, gets a Colorado bite from green chiles, and the Nashville hot chicken sandwich heats up with ghost peppers and cools down with a slathering of ranch. Pair your sandwich with a heaping pile of fries with vadouvan (a curry spice blend) butter, caramelized onions and a mountain of parmesan on top. You can eat in, but taking your food to go and enjoying it along the banks of the Eagle River is highly recommended. Go big before you go home at Biggies.
Molly Martin
Biggies Sub Shop
234 Highway 24 South, Buena Vista
biggiessubs.com
Approximate distance from downtown Denver: 2.5 hours
A road trip is the perfect excuse to indulge your inner cravings — which often means fried foods, and no place in the Arkansas River Valley does those better than Biggies. Hand-cut French fries, cheese sticks, fried pickles and more are on the menu, which centers on big, loaded hot and cold sub sandwiches. But the highlight of the menu for anyone who never quite grew out of the chicken-finger phase is an order of tenders, served hot, crispy and juicy either on a sandwich or solo. Don't forget to grab extra napkins.