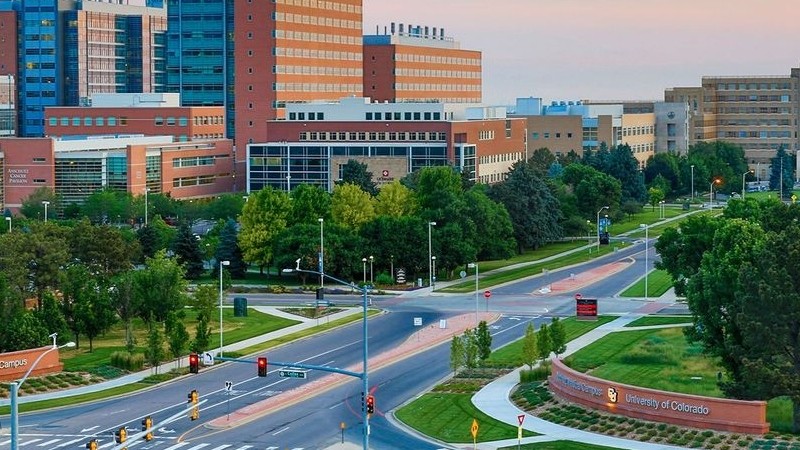 University of Colorado School of Medicine
A look at the University of Colorado School of Medicine on the Anschutz Medical Campus.
Schumé Navarro's lawsuit over Cherry Creek School District mask rules at school-board candidate forums is hardly the only local complaint over mandates related to COVID-19. On September 29, the same day a district judge tossed a suit over Denver's vaccine requirement for police officers and other city employees, the University of Colorado Medical School on the Anschutz Medical Campus was hit with a federal complaint related to its rules calling for staffers and students to get shots.

The pair taking on CU Anschutz, plus Chancellor Donald Elliman and Senior Associate Dean Shanta Zimmer in U.S. District Court for the District of Colorado are identified as Jane Doe M.D. and John Doe, and their gripes center on matters of faith. The fiery opening to the suit contends, "The University of Colorado has enacted a Policy dividing its staff and students into two categories based on their religious beliefs: the 'sheep,' whose religions teach the approved orthodoxy, receive exemptions to the University’s COVID vaccine mandate, while the 'goats,' who hold non-approved religious beliefs, are denied exemptions and then fired or expelled. Only those who belong to religions 'whose teachings are opposed to all immunizations' may ascend to the University’s Valhalla. All others, including Plaintiffs here — a Catholic and a Buddhist — must be cast out."

The organization representing the Does is the Thomas More Society, whose mission statement identifies it as "a not-for-profit, national public interest law firm dedicated to restoring respect in law for life, family, and religious liberty. Based in Chicago, the Thomas More Society defends and fosters support for these causes by providing high quality pro bono legal services from local trial courts all the way to the United States Supreme Court." The organization is clearly seeking more fights of this type; an item atop its website states, "If you are seeking legal advice on the COVID-19 vaccine mandate, click the link."

The suit contends that Dr. Jane Doe, a pediatrician, "will be imminently fired from the Anschutz’s teaching faculty and lose her staff privileges at the Anschutz’s teaching hospital in Colorado Springs as early as October 1, 2021, because of her religiously grounded inability to accept the Pfizer, Moderna, or Johnson & Johnson COVID vaccines.... Because of the COVID vaccination’s reliance on fetal cell strains derived from aborted fetal tissue, in development or testing, she believes that receiving the shot would violate her deeply held religious beliefs that abortion is a grave sin."

This is the same viewpoint espoused by Bob Enyart, a pastor, podcaster and longtime Denver media personality who came down with COVID-19 in late August, just under a year after winning a temporary injunction against Colorado masking and capacity rules at religious services. Earlier this month, Enyart died from the disease.

In response to Enyart's claim that the vaccines were tested "on the cells of aborted babies," the Colorado Department of Public Health and Environment provided context, with a spokesperson noting that "none of the currently authorized and approved COVID-19 vaccines in the United States contain human cells or tissue" before pointing to the "frequently asked questions" page on the department's website. The reference there confirms that "some human cell lines were used in the production of Janssen’s vaccine. Pfizer and Moderna used human cell lines to test their vaccines.... Human cell lines are sometimes used in the early stages of vaccine development because viruses from which those vaccines are made need living cells to reproduce. These cell lines originally came from fetal tissue more than thirty years ago. None of the original tissue remains today; all descended cells are grown in labs. No new fetal tissue is required in the ongoing development and production of vaccines."

This distant connection is still too much for Dr. Jane Doe, who holds a degree in bioethics. Because of her refusal to take the vaccine, the suit maintains, "she will be unable to practice her profession as a pediatric care specialist within 100 miles of the medical school campus in Aurora, or of its associated Children’s Hospital in Colorado Springs — and effectively in the entire state of Colorado — for a period of two years as a result if she is fired."

As for John Doe, the complaint states that he was, until earlier this fall, a first-year CU Anschutz student — but now he is "being forced out of that program by Defendants’ unlawful Policy and actions" because he is "a devout Buddhist who made a vow to the Buddha ten years ago (after visiting a significant monastery in China) that he would live a moral life." In a letter to CU Anschutz administrators last month, John Doe wrote: "I believe that production of vaccines using fetal cells from aborted babies is directly against my belief in the Buddha’s doctrine of not-killing and not-harming."

In response to these claims, CU Anschutz communications director Mark Couch delivered this statement to Westword on September 29: "The School of Medicine received the filing today and is reviewing it. Our vaccination policy is critical for the School of Medicine to provide a safe and healthy place for our students to learn, our patients to receive care, and our faculty and staff to work. Each year, School of Medicine faculty members provide care for more than two million patients and our mandatory vaccination requirement offers the best way to protect the patients in their care. We have adopted this policy in recognition of our responsibility to provide public health leadership in our state and beyond."