Visit Longmont
Longmont's omission from the latest 8th Congressional District map is a sticking point for one advocacy group.
Up until now, All on the Line, a national nonprofit affiliate of the National Democratic Redistricting Committee, has been polite in its commentary about issues related to Colorado's new 8th Congressional District even when it had objections. But in a brief submitted today, October 8, to the Colorado Supreme Court, which is tasked with approving the redistricting map, the gloves came off. The organization accuses the Colorado Independent Redistricting Commission, which delivered its so-called "final" map on September 28, of abusing the process by, among other things, diluting the voting power of area Latinos in the name of making the district politically competitive.

A key section of the brief submitted to the court reads: "The Commission’s adoption of the final plan constituted an abuse of discretion in drawing the boundaries of District 8 in three critical ways. First, the Commission failed to comply with — or even attempt to apply — the constitutional bar against the dilution of minority electoral influence, approving a map that renders it impossible for the large Latino community in District 8 to reliably elect a candidate of their choice. Second, while the Commission correctly considered the preservation of communities of interest in its decision to place the new District 8 along the Denver-to-Greeley corridor, it abused its discretion in applying the 'communities of interest' criterion by inexplicably excluding the City of Longmont, despite its significant shared interests with the rest of District 8. Third, the Commission abused its discretion in applying the criterion of competitiveness by prioritizing it over both preventing the dilution of Latino electoral influence and the preservation of communities of interest when drawing the boundaries of District 8, and failing to adopt or apply a measure of 'competitiveness' that complied with the constitutional standard."

These concerns were teased in our August 19 update about the redistricting battle. At that time, Marco Dorado, All on the Line's Colorado director, stressed the term "communities of interest." This was an allusion to the language in amendments Y and Z, successful 2018 ballot measures that created the Colorado Independent Redistricting Commissions, whose separate congressional and legislative panels are charged with making the redistricting process as equitable as possible. According to the amendments, "'community of interest' means any group in Colorado that shares one or more substantial interests that may be the subject of federal [or state] legislative action, is composed of a reasonably proximate population, and thus should be considered for inclusion within a single district for purposes of ensuring its fair and effective representation."


• Have equal population, justifying each variance, no matter how small, as required by the U.S. Constitution

• Be composed of contiguous geographic areas

• Comply with the federal "Voting Rights Act of 1965," as amended

• Preserve whole communities of interest and whole political subdivisions, such as counties, cities, and towns

• Be as compact as is reasonably possible

Making the 8th politically competitive is of peak importance for Kristi Burton Brown, the recently elected chair of the Colorado Republican Party, and a lightning rod for controversy; this week, transcripts from a lawsuit related to Denver-based Dominion Voting Systems identified her as the past leader of an ultra-dubious election conspiracy group. After the new district was confirmed in April, she released a statement contending that it was "great news for Colorado and great news for Republicans. Come 2022, Coloradans will send another strong, conservative leader to D.C. to fight for our state."


For his part, Dorado told us that All on the Line believes the commission's bullet points are listed in descending order of significance, making political competitiveness its lowest priority. The brief underscores this point, arguing that elevating the importance of competitiveness over what's dubbed "the absolute bar on diluting electoral influence of a minority group" is unconstitutional. 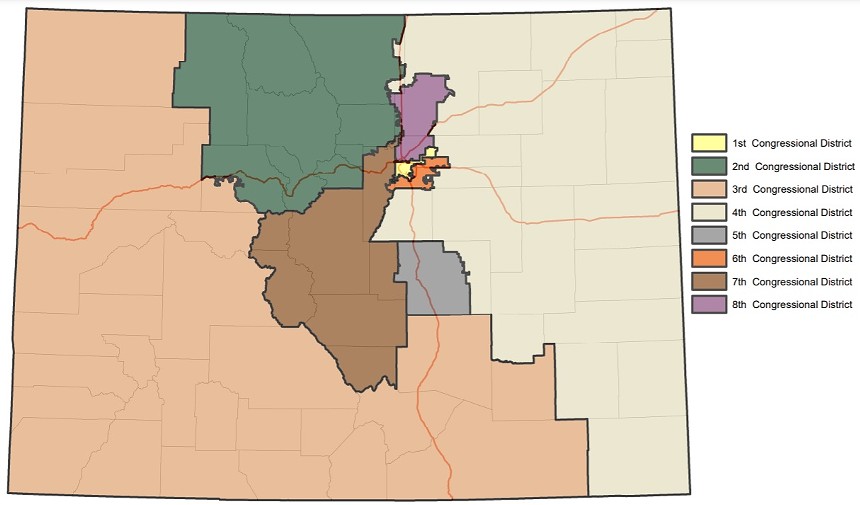 The map submitted to the Colorado Supreme Court on September 28. The 8th Congressional District is shown in purple.
redistricting.colorado.gov
As for Longmont, the brief notes that while the commission was presented with at least one outline that included the community in District 8, the concept was rejected "because of competitiveness concerns."

A statement from Dorado makes it clear that All on the Line is highly dissatisfied with the current map.

"In response to significant public testimony, Colorado’s Independent Congressional Redistricting Commission drew and approved a map that created a new 8th congressional district that stretches from the north Denver suburbs of west Adams County to Greeley," he begins. "However, the lack of consideration of minority electoral influence — which is protected in the state constitution — and the misprioritization of competitiveness over keeping communities of interest whole resulted in abuse of discretion in drawing the lines of the 8th congressional district. This is unacceptable and a violation of the state’s constitution."

He adds: "The Commission relied on a flawed legal understanding of both the minority electoral influence and competitiveness provisions of the state constitution that resulted in an 8th Congressional District that doesn’t actually create meaningful opportunity for Latinos to influence an election. Therefore, the state Supreme Court should direct the Commission to reevaluate the boundaries of the 8th Congressional District. There were several maps considered by the Commission, including one with an 8th Congressional district that would preserve communities of interest between west Adams County and Greeley, protect minority electoral influence, and adhere to the principles outlined in Amendment Y that were overwhelmingly supported by the people of Colorado in 2018."

This fight is going to heat up fast. The Colorado Supreme Court will hear oral arguments about the map, and whether the commission abused its discretion, next Tuesday, October 12. A decision about whether to approve the map or send it back to the commission for redrawing is promised no later than November 1.

Click to read the All on the Line brief.