Courtesy Galina Bye
Take the winding road to the Bucksnort Saloon.
These watering holes are all worth a trip — and a round or two or three. And I should know, because I just  bought a road-trip bar in Oak Creek, the Oak Creek Tavern.

Fortunately, these favorites are all close to places where you can hang your hat and rest your head after you’ve settled up.

3 North Glasgow Avenue, Rico
It’s billed as the “sixth oldest bar in Colorado,” so when you drink at the ’Prise, you end up drinking in a whole lot of history, too. It’s an intimate locals’ joint that also welcomes bikers, hikers and everyone else exploring this veritable movie set of a tiny town just 27 miles from Telluride.

3311 County Road 54G, Laporte
It’s not unheard of to see horses tied up at the front of the Swing Station, a honky-tonk that offers several shows a week. If you’re musically inclined, consider coming for the open-mic night. Since the bar is just ten minutes from downtown Fort Collins, it couldn’t be easier to arrange accommodations and a safe ride — so stay late enough for the singing to get sloppy.

300 Victor Avenue, Victor
Who needs Deadwood when we have Victor? Rebuilt after a fire in 1899 with money from Adolph Coors, the Fortune Club is surrounded by more than sixty other Victorian structures. Many, like the Fortune, are former brothels. If you plan to stay out late, book a room across the street at the boutique Black Monarch Hotel.

2858 Upper River Road, Woody Creek
Filled with Polaroids of local ne’er-do-wells, there’s enough lore under the classic tin ceiling to match the heavy pours. This place was a favorite haunt of Hunter S. Thompson, and his spirit lives on in eclectic decor that makes you forget you’re just fifteen minutes from Aspen’s tony downtown. 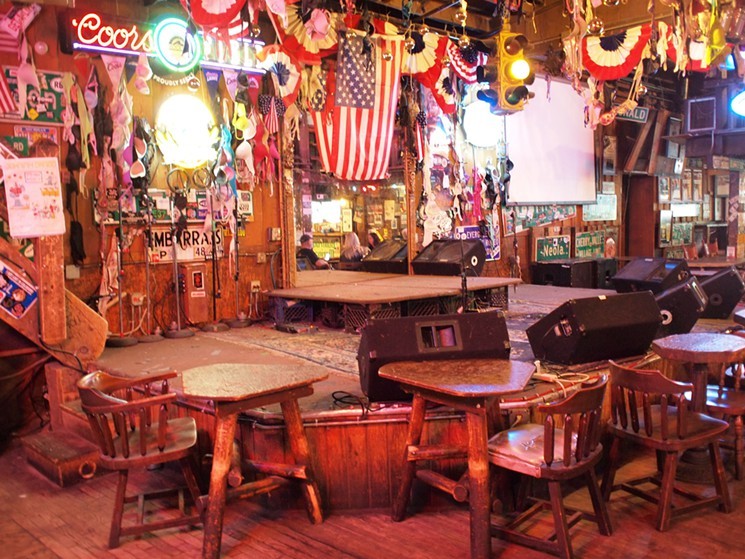 28075 CO-74, Evergreen
With names carved into the bar and bras and dollar bills hanging from the ceiling, the Little Bear is exactly the kind of place where you’d expect to see a legendary live show — which is why everyone from Leon Russell to Count Basie have played here over the years.

421 North Commercial Street, Trinidad
You’ve probably heard about Trinidad’s economic and cultural renaissance, and the ’Dad Lounge has played a big part in that. Reopened for the first time in a decade under the steady hands of Curt Wallach and Suzanne Magnuson, veterans of Denver’s hi-dive, the ’Dad is comfortable, colorful, and regularly features world-class musical acts.

15921 South Elk Creek Road, Pine
Nearly every surface in the Bucksnort is festooned with dollar bills, save for its famous Antler Taps that serve — you guessed it — Antler Ale. It’s a drinker’s rite of passage to add your buck to the Bucksnort Saloon — if you can find any space on the ceiling or walls. And that’s if you can find the place at all: It’s hidden well off the beaten path in Sphinx Park, near Pine.

33355 East Highway 36, Watkins
With high ceilings, plenty of neon, a huge dance floor and the chance to cook your own meal, Lulu’s is a classic drinkers’ bar. This roadhouse is good for both steak and suds, and it’s the perfect excuse to take a trip to an outpost at the outskirts of Colorado’s eastern plains.

Various locations in Pueblo
You’ve got to love a bar with a beer in its name, and doubly so when it’s Gray’s Coors Tavern, the purported inventor of Pueblo’s world-famous chile-smothered Slopper — though the nearby Star Bar makes a pretty good claim, too. Try both. For more Steel City history, saddle up with a schooner and a Dutch lunch at Gus’ Tavern and the coldest beers in town at Eilers Place.

127 Elk Avenue, Crested Butte
One cool thing we get to do as Coloradans is drink in, and drink at, the places patronized by legendary Westerners. Butch Cassidy is said to have left his revolver behind after a bad night at Kochevar’s, but you should have better luck. Located at the end of Crested Butte’s main drag, this bar has plenty of pub games to keep you busy on low-key nights, though there’s always a good chance you’ll run into a neighborhood party.

Skyler McKinley is a fourth-generation Coloradan and owner of the Oak Creek Tavern, a neighborhood bar in the rural heart of the Yampa Valley. A former political staffer and the State of Colorado’s founding deputy pot czar, he now oversees AAA’s regional public affairs division. He lives in Denver, but drinks — and occasionally tends bar — in Oak Creek.