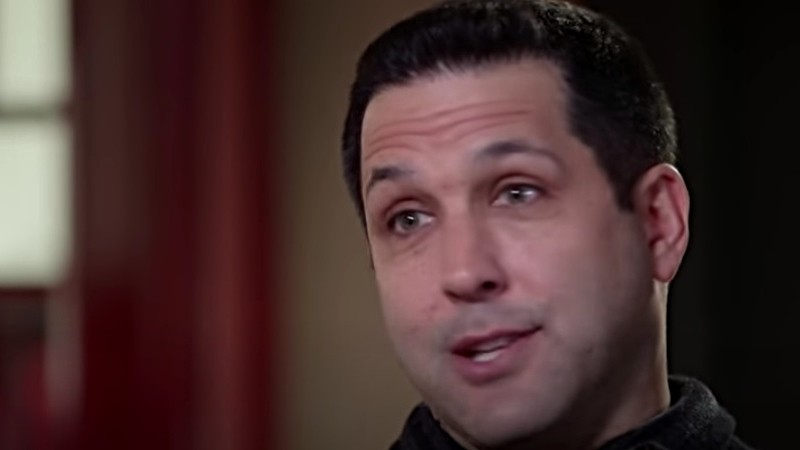 YouTube
Adam Schefter as seen during a 2019 profile on HBO's Real Sports with Bryant Gumbel.
The emails uncovered amid an ongoing investigation into the poisonous culture of the Washington Football Team, which recently led to the resignation of Las Vegas Raiders Coach Jon Gruden, have dented another celebrity: ubiquitous ESPN personality and former Denver scribe Adam Schefter. But their offenses are very different. Whereas the note that led to Gruden's downfall was overtly racist, Schefter was revealed to have committed a sin that was journalistic in nature: The Los Angeles Times divulged that he let former Washington Football executive Bruce Allen read an entire story in advance of its 2011 publication and offered to let him alter anything he didn't like.

In response, Schefter released a statement implying that what happened was a one-off lapse in judgment. "Fair questions are being asked about my reporting approach on an NFL lockout story from 10 years ago," he wrote. "Just to clarify, it’s common practice to verify facts of a story with sources before you publish in order to be as accurate as possible. In this case, I took the rare step of sending the full story in advance because of the complex nature of the collective bargaining talks. It was a step too far and, looking back, I shouldn’t have done it. The criticism being levied is fair. With that said, I want to make this perfectly clear: in no way did I, or would I, cede editorial control or hand over final say about a story to anyone, ever."

But Schefter's tone of high dudgeon doesn't ring true given his behavior in Denver decades ago. As I reported in the September 1999 article "Ball Carriers," he co-authored two books with figures from the Denver Broncos — all-pro running back and now NFL Hall of Fame member Terrell Davis (TD: Dreams in Motion) and head coach Mike Shanahan (Think Like a Champion: Building Success One Victory at a Time) — at a time when he was covering the team for the Denver Post. Schefter's decision to embark on a monetary relationship with individuals on whom he reported regularly blasted his claims of objectivity to smithereens: Davis and Shanahan (who's being inducted into the Broncos Ring of Fame on Sunday, October 17) were more than pals; they were partners.

At the time, Schefter responded to accusations of impropriety with the same sort of bluster he demonstrated this week. "I challenge anyone to show me a single incident when I have not been objective," he told me. His sports editor at the Post, Neal Scarbrough, offered us this wafer-thin defense: "Adam's a real professional. People always claim he got this story or that story because he knows them or is friends with them. But they don't realize that he's called them three or four times to get to them. While they're having dinner, he's on the phone."

There's no question that Schefter is driven. He attended Northwestern University's Medill School of Journalism in Chicago in 1989 and 1990, when I did; even then, he stood out because of his extraordinary energy: While other students were struggling to keep up with coursework, he was stringing like crazy for the Chicago Tribune. In one particular magazine-writing class in which we were both enrolled, the professor mercilessly ripped him for loading up an assignment with standard sportswriting jargon, but Schefter wasn't cowed. He liked sportswriting jargon, and his genuine fondness for the form paid off; he quickly moved into a plum position with the late, lamented Rocky Mountain News. According to Schefter, the Post came to him in late 1994 and offered a $10,000-a-year raise if he'd jump ship. "The Rocky countered with an extra $27 a week if I'd stay — and I did," he said back in 1999. "Then, eighteen months later, the Post came back with an even larger offer. So I called the Rocky and asked if they could come close to that. And they said, 'You just got a raise eighteen months ago.'"

For Schefter, the Post had another advantage: The Rocky's leadership would never have signed off on the Davis and Shanahan tomes. According to Barry Forbis, the Rocky's sports editor at the time (and the former overseer of Schefter during his days there), "Our policy would be that you can't write that kind of book if you are covering the beat."

Schefter didn't let this implicit criticism of his journalistic ethics cramp his style. In 2004, he joined NFL Network, where questions about crossing the line were moot, since everyone knew he was being paid by the league. Five years later, he made the jump to ESPN and quickly burnished his reputation for breaking news. But he's less a dogged reporter digging for the truth about what's going on behind the scenes than a trusted water carrier: Team sources provide him with information, including the uncomfortable kind, because they know he'll dispense it in a manner that will do them the least harm.

This too-cozy relationship has greatly benefited Schefter, who's become a star in the sports world on the basis of his persistent scoopage. But he's basically an NFL mouthpiece who'll do whatever it takes to remain in the good graces of the powers that be — including offering to let a team executive tweak his copy.

Schefter has never cut his ties with Denver. In 2010, he was part of a group that bought several local radio stations, and he continues to do phone-ins with local outlets. But from a journalistic perspective, the Washington Football Team news is less a revelation than a confirmation. That's who Schefter is.