Courtesy of CBS4 Denver
Denver Public Schools is increasing the number of safety patrol officers.
In June 2020, amid protests over the death of George Floyd at the hands of Minneapolis police, Denver Public Schools passed a resolution ending its contract with the Denver Police Department to provide the district with eighteen school resource officers, shorthanded as SROs. The Latino advocacy organization Padres & Jóvenes Unidos saw the pact as an important step in the shift toward police-free schools. But now, Padres is accusing the district of violating the agreement by replacing the DPD law enforcers with DPS safety patrol officers, or SPOs, who are essentially cops under another name.

"They're exactly the same, but they have slapped on a different title," says Elizabeth Burciaga, lead organizer of Padres. "They have the same patrol-unit cars, the same uniforms, and they've secured the power to ticket our students. As a lot of our students have pointed out, they're literally police officers."

DPS spokesperson Will Jones disputes this characterization. Safety patrol officers "are not and will never be the equivalent of SROs, who were in one building 100 percent of the time," he insists. "Their focus is on responding to significant safety threats, not on the criminalization of students."

Jones underscores the need for security by providing a copy of a September 27 email from DPS superintendent Dr. Alex Marrero to Padres executive director Elsa Bañuelos. The letter includes statistics meant to show why additional safety patrol officers are needed; with the departure of Denver Police SROs, the district has upped its number of SPOs from eighteen to 22. According to Marrero, calls for service in three key categories increased nearly 25 percent from the fall of 2019 to the same period this year, including seizures of several loaded firearms, plus a machete and multiple other weapons. He noted that one student had been stabbed by a knife, and marijuana possession was up by almost 40 percent. 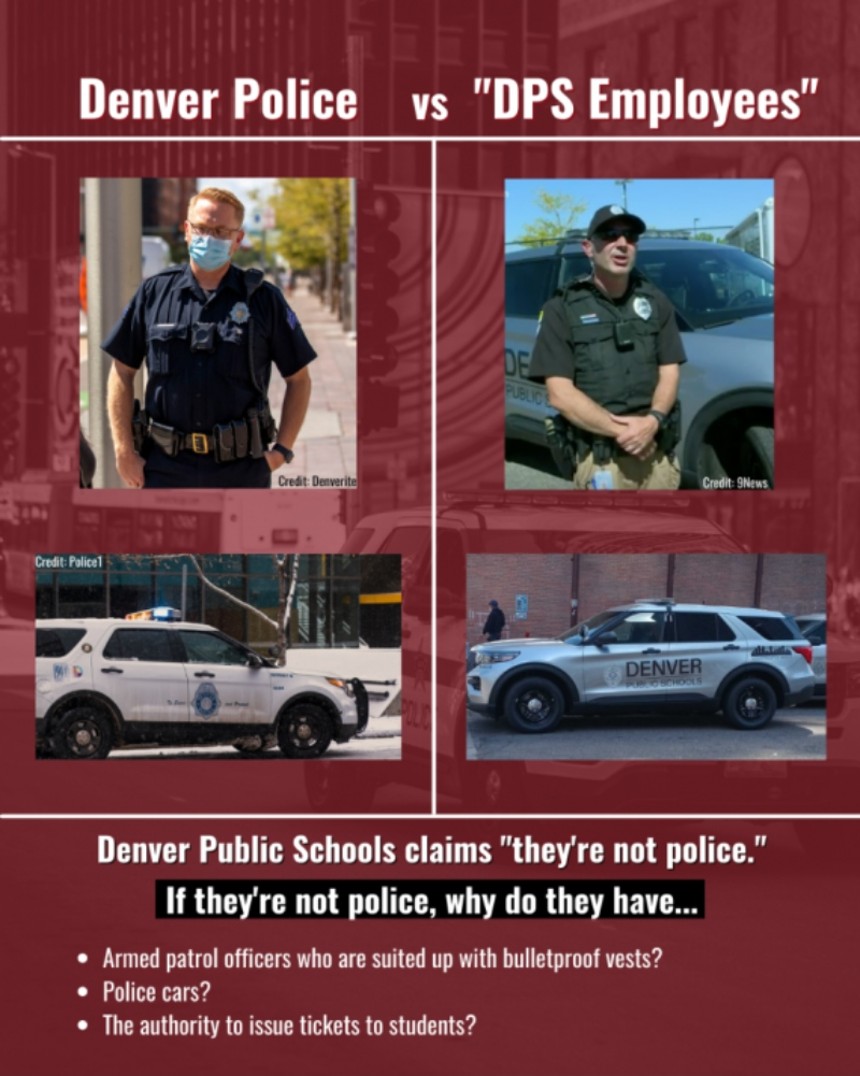 A Padres & Jóvenes Unidos graphic that attempts to show the similarities between Denver Police school resource officers and Denver Public Schools safety patrol officers.
Padres & Jóvenes Unidos
The June 2020 resolution makes it clear that the previous system of school policing wasn't color-blind. From the school years of 2014-15 through 2018-19, it points out, "DPS students were ticketed or arrested at school by police officers at least 4,540 times, with the vast majority being Black or Latinx students between the ages of ten and fifteen, thereby introducing them to the criminal justice system and often inflicting institutional trauma." Moreover, "the overwhelming majority of the incidents could have been more effectively addressed by school personnel, restorative practices, or other community-based services."

Burciaga doesn't think that hiring more safety patrol officers falls within any of these categories. Her organization's concerns were raised during a September 25 discussion between Marrero and Padres stakeholders participating on Facebook Live — but the exchange didn't calm the waters. "Based on what we heard from our parents and students and community members who participated, they were disappointed," she says. "They felt utter disrespect in how he talked to our students and parents."

Marrero wasn't pleased with the results, either. Prior to the Facebook Live session, the superintendent had met with Bañuelos on multiple occasions, and these get-togethers had left him "feeling energized, excited and ready to be part of the community forum," Jones says. "Unfortunately, the tone and tenor of the [Facebook] event was not as Ms. Bañuelos had described it. He is disappointed that this event did not allow for a better exchange of information between him and the community members who participated." Even so, Jones adds, Marrero remains "grateful for this opportunity and looks forward to other opportunities to engage."

Here's a recording of the September 25 conversation.
At this point, Burciaga is unclear whether DPS's safety patrol officers have the authority to make arrests. But they can issue citations, as noted by a "limited delegation of authority" document issued under the signature of Denver Executive Director of Safety Murphy Robinson this past April. "Patrol Officers of the DPS are hereby commissioned to enforce specific ordinances of the City, and are authorized and empowered to enforce specific provisions of the Denver Revised Municipal Code," it states. The offenses listed include assorted parking offenses, as well as "possession of injection devices," "possession or consumption of marijuana," "petty theft," "destruction of public property," "destruction of private property," "disturbing the peace," "threats," "assault," "public fighting," "possession of graffiti materials prohibited," "trespass," "dangerous or deadly weapons," "certain knives unlawful," and "throwing stones or missiles."

Burciaga doesn't know how many times such citations have been issued during the 2021-2022 year to date; she's not satisfied with the data accessible on DPS's school resource officer transition webpage. She emphasizes that "we want safe, healthy and equitable schools for our students, and we want schools to be free from all forms of policing. It doesn't matter if it's a DPS employee or the Denver Police Department. If they act or look like police, and have the same powers as police, they're police. We need to be investing in the mental health of our youth, not criminalizing our students."

But Jones sees clear distinctions between SROs and SPOs. "DPS Safety Patrol Officers are not attached to any particular school," he says. "These officers patrol the school district in Department of Safety vehicles and are dispatched to address safety threats at the request of school employees. For example, our DPS Safety Patrol respond to calls from schools about fights involving serious injuries, possession of weapons, or outside individuals presenting a threat to schools."

He adds: "Without police on site, school leaders and their teams inside each school have more say in how discipline is handled. Of course, some cases warrant law enforcement, and schools can contact police as needed."

Thank you for arranging the meeting this past weekend. Although I would have loved a longer dialogue, it was informative and insightful. I am following up on the two items I said I would. Please share with your membership.

This past spring, DPS applied for our Department of Safety Patrol Officers to have ‘delegated authority’ from the City and County of Denver. Delegated authority gives our officers the ability to issue citations (tickets) to individuals, including unwanted individuals on school grounds, as well as students for low-level municipal violations as a last resort. The authority was granted by Public Safety Director, Murphy Robinson, and DPS Department of Safety officers received the necessary training as part of that delegated authority. Since the start of the school year, our Patrol Officers do possess the authority to issue citations.

Our focus is on being intentional about reducing the school-to-prison pipeline. We understand that, regardless of their age, our students make mistakes. We don’t want one mistake when they are a young person to negatively impact them for the rest of their lives. So, our Department of Safety Officers are not writing tickets to students unless all other opportunities for intervention have been exhausted at the school level.

As you may know, DPS has been working with the community over the past year to remove police officers from our schools and reduce the school-to-prison pipeline. We want to make sure that our community understands this new approach is not intended to undermine those efforts.

The Department of Safety has been working with school leaders and our Student Equity and Opportunity team to ensure that there are processes in place to first refer students to the school’s disciplinary process before officers write any tickets. We will continue to collaborate throughout the fall semester to ensure these processes are both well-established and supportive to our school communities.

Denver Police and Denver Fire continue to be important partners in our school emergency plans and have access to all schools through our access control system. We are able to monitor their access and run reports when needed while also providing them immediate access during a critical situation. Through our collaborative partnership with Denver Police, officers only use their access when called to a school. We have built in agreements with DPD leadership that when access is needed for investigation purposes, officers will work through the Department of Safety and school principal on coordinating that request. These access requests are limited so that the school learning environment is not disrupted.

DPS does not have the legal authority to dictate to Denver Police when a ticket or arrest is issued. DPD is mandated to follow their internal policies and enforce laws as required by Colorado Revised Statutes and Denver Municipal Code. We have been intentional about asking DPD to conduct these enforcement actions away from school whenever possible. However, we are careful not to put our employees in a situation that would violate CRS Section 18-8-104, which defines the offense of obstructing a peace officer. This section makes it a crime to interfere with or hinder peace officers, firefighters, EMT providers, rescue specialists or first responder volunteers in the course of their official duties.

Furthermore, although we no longer have School Resource Officers from DPD in our schools, DPS employees and parents know they can still call Denver first responders including DPD to respond to any given situation. DPD officers do not have the same relationships with the school community, including our Student Equity and Opportunity team, or the same training and understanding when it comes to the school-to-prison pipeline and restorative justice. The intent behind the delegated authority is to help ensure that the DPS community sees its own Department of Safety as its first and main point of contact and does not contact DPD directly.

Thank you again for the opportunity to hear from students and parents. I also thank you for allowing me to ask some questions as well. If possible, please let me know if you and your membership could respond to the following overarching question I still have so I can make the best decision for our students:

In the City of Denver:

Overall call for service in Priority 1-3 have increased almost 25%
We have already confiscated four loaded firearms on school campuses, multiple weapons (including a machete), weapons such as guns, tasers, etc., and experienced one student stabbed with a knife
There has been a 39% increase in marijuana possession by students at school (43 total this year)

During the current school year, only one ticket has been issued, and it was by Denver Police, not DPS. We were focused on referring students into the discipline process.

Incidents related to ticketing this year:

Is it the recommendation of this organization and your community members that our patrol team not possess the authority to ticket (including unwanted individuals on school grounds)?

Thank you again for your engagement.