Mortal Kombucha Started as a Joke but Is Expanding Fast 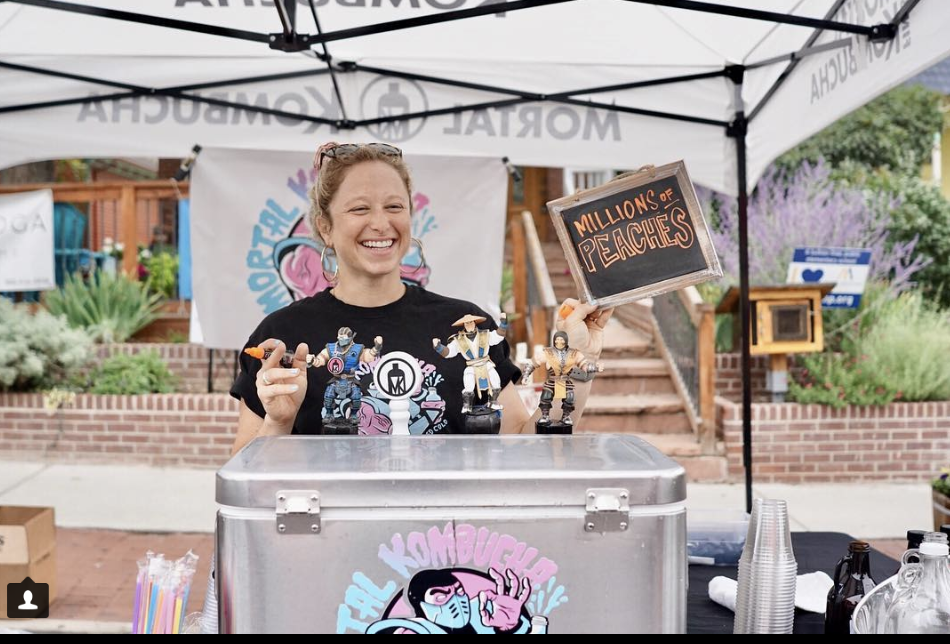 Mortal Kombucha
Becca Schepps started Mortal Kombucha as an “aggressive” alternative to the elixir-like kombuchas on the market.
Becca Schepps has dreams of a global kombucha takeover. With a powerhouse blend of sharp humor and kick-ass energy, the founder of Mortal Kombucha built her company on the foundation of a type 1 diabetes diagnosis along with her professional experience in advertising and creative directing. The brand has experienced 500 percent growth in the last year — pretty impressive for a company that was never really meant to exist.

Schepps has always been a health-conscious person. “My mom’s a super healthy person,” she says. Growing up, “I didn’t know that people eat full bowls of sugary cereal. I thought that was a dessert. I didn’t know what soda was.”

At the “late age” of 25, Schepps was diagnosed with type 1 diabetes, commonly known as juvenile diabetes and usually diagnosed in the preteen years. The diagnosis drove her to seek drinks that were full of flavor but low in sugar. For the next decade or so, Schepps “was drinking kombucha all the time, never making it.”

In 2017, she was working as a freelance creative director when the idea for a bold kombucha brand hit her. She remembers sitting at her desk late one night and reading the ingredients of the kombucha she was drinking; one of them was “100 percent purified love.”

“I was working too late, really cracked, and I was like, ‘This is made with love? This is crap. This is a slightly caffeinated, slightly alcoholic bubbly beverage. This is an energy drink.'” Her next thought was, “Screw this. I’m going to make an aggressive kombucha, and there’s going to be no love in it.” She came up with the name, bought the domain and started Photoshopping fatality scenes from Mortal Kombat, replacing blood spurts with champagne bursts. “[I was] coming up with this entirely fake brand, and I thought it was hilarious,” she remembers.

On her newly made kombucha website, Becca expanded her fake line of combative kombuchas, writing product copy and setting up a mock e-commerce store. “I just started talking about it online like it was real, thinking that people would understand that an aggressive kombucha company is ridiculous.” But people started ordering from the Mortal Kombucha website.

“I remember getting home from work one day and telling my husband, ‘Hey, I started a kombucha company today. We need to figure out how to make kombucha,'” she says. The two headed to Boulder Fermentation Supply, and with expert guidance from that store and The Big Book of Kombucha, by Alex LaGory and Hannah Crum, for reference, Schepps got brewing. “The book said it would take three weeks, so I emailed the seven orders I had, and I said, 'Your kombucha will be ready in three weeks.'”

Schepps continued to work backward, looking over the varieties she had dreamed up. Flavors like Napalm-Egranate, a spicy blend of pomegranate and cayenne syrup, were suddenly real and ready to bottle. From the start, Mortal Kombucha has kept things simple, using Denver’s Teatulia tea as a base, then flavoring with fresh fruit juices. “[They are] very easy-to-understand flavors,” she explains. “We’re trying to make your everyman’s kombucha rather than being like a complete, you know, 'elixir of life.'”

Next to other kombucha brands promising adaptogens and mental clarity in gently toned bottles, Mortal stands out on store shelves. There’s nothing gentle about this ’booch: The bottles are tagged with neon-colored fruit-clenching fists and full of punchy flavors like Black Sage’s blackberry, sage and ginger or the spirulina-tinted Marg Simpson, a cyan brew aptly flavored with lime-forward citrus.

Now, Mortal Kombucha has transcended its home-brewed roots. After moving to increasingly larger commercial kitchens and beginning a new partnership with Rocky Mountain Cultures (a co-packing facility that specializes in producing fermented beverages), the brand is making enough kombucha to supply Whole Foods stores across the Rocky Mountain region — which spans from Montana to New Mexico — as well as the Pacific Northwest. You can also find bottles in natural retailers from Southern California to Maine. On October 31, it hit shelves in select King Soopers locations, too.

Overall, the objective for Mortal Kombucha is to act as the “gateway kombucha to the kombucha-curious.” Schepps hopes to break the stigma of kombucha and make it accessible to people who may have been hesitant to try in the past.

“It’s really about showing that healthy can be un-boring, and creating flavors that everyone can like in a healthy beverage,” she concludes. “You can have it all, and you can have fun.”