Kersten Jaeger
Hot dog stands have largely disappeared from Home Depot stores.
“Out of sight, out of mind. If they had done it all at once, there would have been hell to pay,” says Chris Ryan of the recent removal of hot dog stands outside of Home Depot and Lowe’s stores. Ryan and her daughter, Kerri Ginther, each owned a stand (Ryan’s in Parker and Ginther’s across from Southlands Mall in Aurora) until they were told in January that they had thirty days to remove their equipment.

While this summer saw the return of two stands in Fort Collins, so far the only one to reopen in the Denver area is the Brat Bar in Arvada. In September, Home Depot spokesperson Christina Cornell told Westword, “We’re continuously evaluating the needs of our business, and we found that in some areas we need to repurpose the space to better serve our customers’ home improvement needs. The fact is that all food vendors at our stores have remained closed since March 2020, and many voluntarily chose to move their business somewhere else during that time. We appreciate the years of partnership and wish them well in their future business.”

The removal of hot dog stands at home improvement stores has been happening outside of Colorado, too. At the end of July, the Detroit Free Press reported that Home Depot was closing every food vendor in Michigan...for good. Store owners were given one week to remove all of their equipment.

These stands are more than just a place to score a quick, cheap bite. Over many years of operation, they have become staples in their communities, with owners developing many longstanding relationships with customers, stand employees and those who work at Home Depot and Lowe’s outposts, many of whom picked up lunch from the vendors on their breaks.

After nearly a decade in business, the notice to vacate was a surprise for Ryan. After all stands were shut down in March 2020 in response to the pandemic, owners didn’t hear from Street Eats, the management company which is responsible for food vendors at Home Depot and Lowe’s, until July of that year. That’s when the monthly emails began. Ryan shared one such email, which reads:

We wanted to provide you with an update regarding resumption of service to Home Depot. We continue to work with Home Depot to develop a comprehensive plan, but at this time we are not to the point where service can resume. We understand this is a difficult time and you may need to assess whether or not to continue to wait. Should it make sense for you to remove your food unit, please send me an e-mail and we will get in touch with you on next steps. Otherwise, we commit to providing you with another update next month. The Brat Bar in Arvada is the only stand currently operating outside a Home Depot in the Denver area.
Kersten Jaeger
“They gave a light at the end of the tunnel every month,” Ryan explains. Eligible for pandemic assistance, she thought she was one of the lucky ones who could afford to wait for the reopening and didn’t need to seek out other options. In fact, she spent 2020 renewing her business license, business insurance and sales tax license, ready to start up when she received word.

Even after being told to remove her equipment in January, Ryan says she received confusing messages about the future of her business. In a January 11 phone call with Paul Spencer, director of client services for Street Eats, Ryan remembers expressing concern about the fact that removing her equipment violated her contract with the management company. In response, she says, she was told that a new contract could be drawn up when things resumed, but “not to hold her breath for when that would be.” She also requested that information in writing and recalls Spencer saying, “Absolutely not.” Spencer and Street Eats did not respond to our request for comment.

“For months we were waiting to hear, while still paying loans,” explains Mark Johnson, who ran Dogs Gone Wild in front of the Home Depot on Mayberry Drive in Highlands Ranch with his wife, Melissa Taylor. The two work full-time as firefighters and never planned to be food vendors, but in 2019, they stumbled across the stand for sale after a hike and thought it would be a pleasant way to spend days off from their high-stress jobs. The stand had been at the Highlands Ranch location for thirteen years and was one of the busiest and most lucrative in the state; Johnson and Taylor purchased the unit in October 2019 and were approved for operation in January 2020.

“We had no reason to think there was anything to worry about with that business,” says Taylor, explaining that they had upgraded the whole stand, purchased new signage and had a very successful two months of business before the March 2020 cease-operations notice.

“What happened in our opinion was [Home Depot] hid behind COVID,” Taylor says. “People at work would ask us how the hot dog stand was doing, and we’d tell them, and they'd scratch their heads and say that doesn’t make any sense.”

Taylor and Johnson waited while they watched food trucks reopen all over Colorado and heard state officials encouraging these types of food stands to get back in business. At Dogs Gone Wild, all food was served wrapped, the stand only had one employee working at a time, and the owners were happy to comply with mask mandates. And yet even when indoor restaurants reopened, the stand was still not permitted to resume operations. 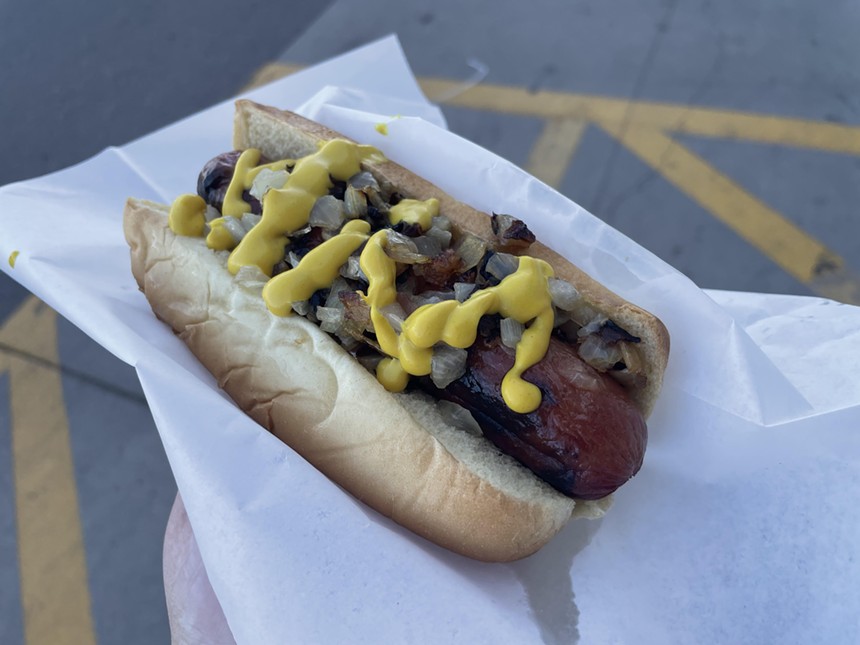 Kersten Jaeger
While stands remained vacant, Home Depot itself was having a very successful year. “They were up in sales significantly,” says Taylor. “That’s the hypocrisy of it all.” While these small-business owners bided their time, paid insurance and maintained the stands, people flocked to buy paint and hardware supplies for pandemic projects. Home Depot reported increased sales all four quarters of 2020, for an overall sales increase of 19.9 percent. Lowe’s experienced an overall sales increase of 24 percent.

Cornell maintains that the decision to remove the stands came down to logistics. “As a retailer, we just have to be mindful of the space and decide if the business needs it,” she says. “It might not be at this exact moment, but come spring, our busy season, or if our building services team has some other uses for that space. Just in general, we’re re-evaluating the spaces in our stores, and in some cases found that we needed it.”

But that reasoning doesn’t ring true for some stand owners. “At my Lowe’s, they replaced my hot dog stand with a water cooler,” says Hunter Slife, owner of Slife’s Devil Dogs, which was formerly located in front of the Lowe’s in Littleton and has since moved to downtown Evergreen. “They might know more than I do — I’m just the CEO of a food truck — but it doesn’t seem like the same opportunity.”