The board voted to approve the name after it was suggested by community members, according to the school's director, Jessica Brown, who is leading the design work. Charles “Charlie” Burrell is known as “the Jackie Robinson of music” for helping break the color barrier in classical music and music education. The 101-year-old joined the Denver Symphony in 1949; that organization is now known as the Colorado Symphony.

The Charles Burrell Visual and Performing Arts magnet will be located at Aurora Central High School and Peoria Elementary School and will open in the 2022-2023 school year for students in kindergarten through third grade and sixth- and ninth-graders. The school plans to add on a new grade each year, says Brown.

The arts program is one of several new magnet programs that Aurora Public Schools has in the works as part of its Blueprint APS, a strategic plan for the district's future. The district will reopen Wheeling Elementary School in 2022 as an entrepreneurship and invention magnet, and over the next few years, it plans to create specializations in business management and hospitality, health, project-based learning, STEAM and technology and engineering.

The vision for the Charles Burrell Visual and Performing Arts Campus is “arts integration,” according to Brown. Art will be included in all content areas, from math to chemistry, and educators hope to encourage students’ passion for the arts and provide a vehicle for developing life skills, she says.

“Art can teach you a way of communicating. It can teach you discipline from practicing every day,” Brown adds. “The arts help you problem-solve. It’s really preparing students for life.”

Brown worked for the School District of Philadelphia for 23 years before moving to Denver in August. During that time, she was the founding principal of a public arts magnet. “My first graduating class has a 98 percent graduation rate and a very high college acceptance rate,” she explains. “When students love and are passionate about an area like the arts, they are going to be successful.” 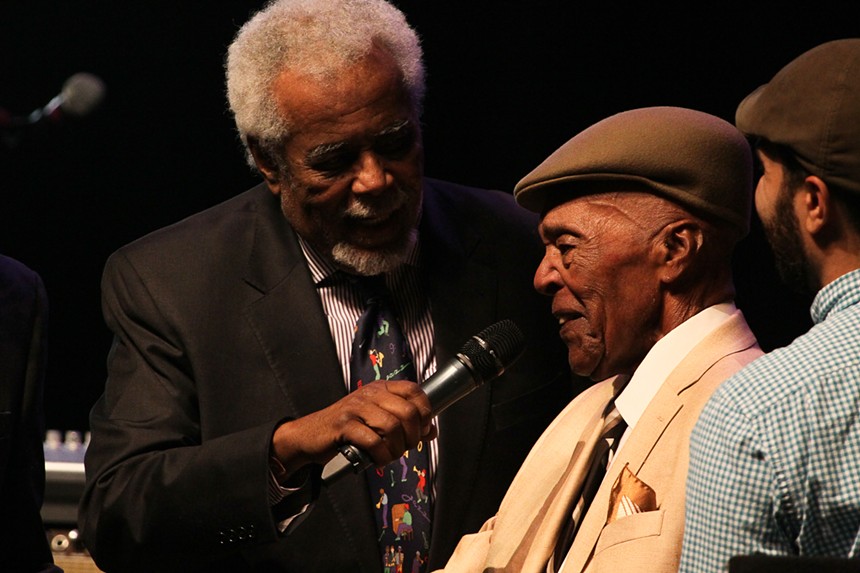 Purnell Steen and Charlie Burrell.
Brandon Marshall
The design team behind the Visual and Performing Arts Campus met with Burrell to discuss the school's name during the first week of November. “He was incredibly honored and humbled by it,” Brown says. “He’s led an incredibly accomplished life, and there are so many obstacles that he faced.”

Burrell grew up in Detroit during the 1920s and ’30s and started playing bass in seventh grade when he was invited to join the school orchestra; after that, he never put it down. After hearing the San Francisco Orchestra’s rendition of Pyotr Ilyich Tchaikovsky’s Symphony No. 4, Burrell set a goal to one day play under that orchestra’s director, Pierre Monteux.

During World War II, Burrell enlisted in the Navy, where he joined an all-Black band. When he returned to Detroit to attend Wayne State University with hopes of teaching music, however, he was told he would never find work as a Black music teacher.

Burrell left for Denver shortly after. He met the Denver Symphony’s principal bassist, John Van Buskirk, on a streetcar, which led to Burrell’s eventual audition for the symphony. He was hired in 1949 and played there for ten years before moving to San Francisco and achieving his dream to play for the San Francisco Symphony. He was that symphony's first Black member, as well.

While in San Francisco, he also became one of the first Black teachers at the San Francisco Conservatory of Music.

Burrell moved back to Denver in 1965; he rejoined the symphony and played until he retired in 1999, when he was 79.

Throughout Burrell’s classical career and even after his retirement, he also performed as a jazz musician, playing with such figures as Ella Fitzgerald, Billie Holiday, Duke Ellington and Charlie Parker.

Burrell was given the Martin Luther King Jr. Humanitarian Award in 2015 and inducted into the Colorado Music Hall of Fame in 2017.