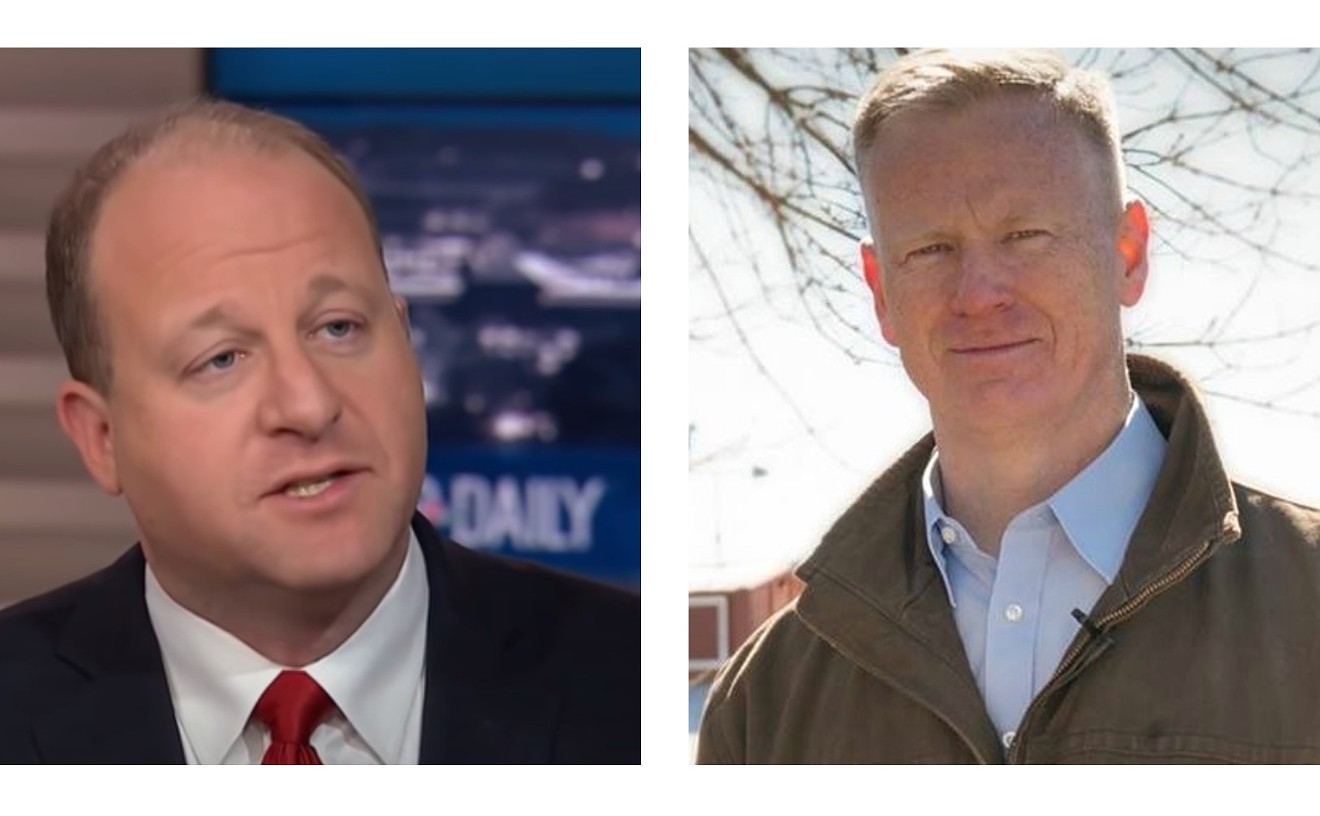 MSNBC via YouTube file photo/George Brauchler for Governor 2018
Governor Jared Polis may wind up running against former district attorney George Brauchler again.
A complaint about Governor Jared Polis submitted to Colorado's Independent Ethics Commission on November 17 is ostensibly about the hiring of political consultant Rick Palacio to fill in as chief of staff for a few months last year while the full-timer in that position, Lisa Kaufmann, was on maternity leave, and whether the payment he received violated state ethics rules. But given that the document was filed by former 18th Judicial District DA George Brauchler, it's also a likely preview of the 2022 governor's race.

Brauchler was an announced candidate for governor in 2018 before switching his focus to the race for Colorado's attorney general — which helped clear the field for the eventual Republican gubernatorial nominee, state treasurer Walker Stapleton. The election didn't work out for either of these hopefuls: Stapleton was easily trounced by Polis, while Brauchler fell to current AG Phil Weiser.

While Brauchler hasn't announced his intention to challenge Polis again in 2022, he's making moves to raise his profile and remain in the political conversation. In addition to writing columns for the Denver Post, he recently took on a regular weekday gig as a talk-show host on KNUS radio, a conservative station that's the focus of a new lawsuit aimed at the outlet and yakker Randy Corporon by former Dominion Voting Systems executive Eric Coomer.

According to the release about the ethics complaint, Brauchler is acting on behalf of an organization called Defend Colorado. Not to be confused with Defend Colorado Now, which backed an anti-immigration measure in 2006, Defend Colorado describes itself on its barebones website as "an action-based organization that: opposes extreme special interest measures threatening our state; and supports common sense solutions to move our state forward. To achieve this objective, Defend Colorado demands accountability, transparency and honesty in government."

But Defend Colorado wasn't particularly transparent about its involvement in the last investment cycle; according to our September 24 post, the dark money group wouldn't reveal its funding sources for the $215,000 it contributed to digital advertising related to two measures on the City of Denver's November 2021 ballot (Referred Question 2F and Initiated Ordinance 303, both of which lost handily).

Brauchler's complaint states that "while Palacio was serving as Governor Polis’ Chief of Staff, his own limited liability corporation was awarded a lucrative consulting contract. Palacio received both a 'full time' government salary of over $15,000 and a $15,000 payment to his own company for consulting in the same month for the same work. This self-dealing and double dipping is clearly a conflict of interest and ethical violation carried out by the Office of the Governor and Palacio. The lucrative state contract to Palacio, a Polis political ally who in 2018 was paid over $329,000 to help elect Jared Polis as Governor, violates the very public confidence and trust that Amendment was designed to maintain. In 2018, Palacio Strategies Group, LLC and The Majority Institute, LLC, both owned by Rick Palacio, were paid $310,400 out of $1,047,400 raised by the independent expenditure committee supporting Polis’s run for Governor, Bold Colorado. Polis for Colorado, the Governor’s candidate committee, also paid The Majority Institute, LLC
$19,000 for 'miscellaneous' services in 2018."

Polis spokesperson Conor Cahill offers this response to the complaint: "Rick served as Interim Chief of Staff while our Chief of Staff was on maternity leave. Lisa returned from maternity leave right around the time COVID vaccines were being approved, and it was decided that the state needed added capacity to help ensure Colorado had an equitable vaccine roll out and enough executive leadership supporting the around-the-clock demands of the response and recovery from the pandemic. Because of his experience throughout his career, Rick was uniquely positioned to help lead these new efforts in overseeing the COVID response focused on economic recovery and to get the safe and effective COVID vaccine to hard-to-reach communities and communities of color across our state. His hiring complied with state procurement law and rules."

Adds Cahill: "Rick Palacio is a Pueblo native and sixth-generation Coloradan who sprung into action to help our state serving as interim Chief of Staff during a once-in-a-generation pandemic, historic wildfires and we are grateful for his commitment to public service and his steadfast leadership that guided our vaccine and recovery efforts."

Palacio stepped in as temporary chief of staff in August 2020 and left the position on November 30, reportedly one day before his consulting contract went into effect.

Whether the Independent Ethics Commission ultimately slaps Polis's hand in this case could be of less importance than Brauchler's role in the complaint — particularly if he winds up making another run for governor.