London Pub With a Magical Twist Opens December 1 in Belmar

Handsome Boys Hospitality
Telephone Pub opens December 1.
With elements inspired by a certain wizard-filled world (wink, wink), a new bar is coming to 7260 West Alaska Drive in Lakewood. The concept initially had a name that was a nod to the book and movie series that inspired the place, but since that moniker had the potential to cross some legal copyright lines, it's now known as Telephone Pub.

Telephone Pub will have its soft opening on December 1; the grand opening is planned for Friday, December 3, and will coincide with the first day of the Downtown Lakewood Holiday Bazaar. The space is the former home of longtime staple Baker Street Pub, which shuttered in 2018, and the brief-lived Winston's Pub & Grill, which was open for only a short time before closing in 2019.

"I grew up coming to Baker Street, so this is full circle for me," says Josh Schmitz, whose Handsome Boys Hospitality group just keeps growing. Schmitz and his team are also behind the horror-themed Slashers on East Colfax, ice cream shop Hidden Gems and its neighbor Drunken Bakery in Larimer Square, and a third Larimer Square space occupied by Halloween pop-up bar Spirits in October that just reopened November 26 as Naughty List, a Christmas pop-up. 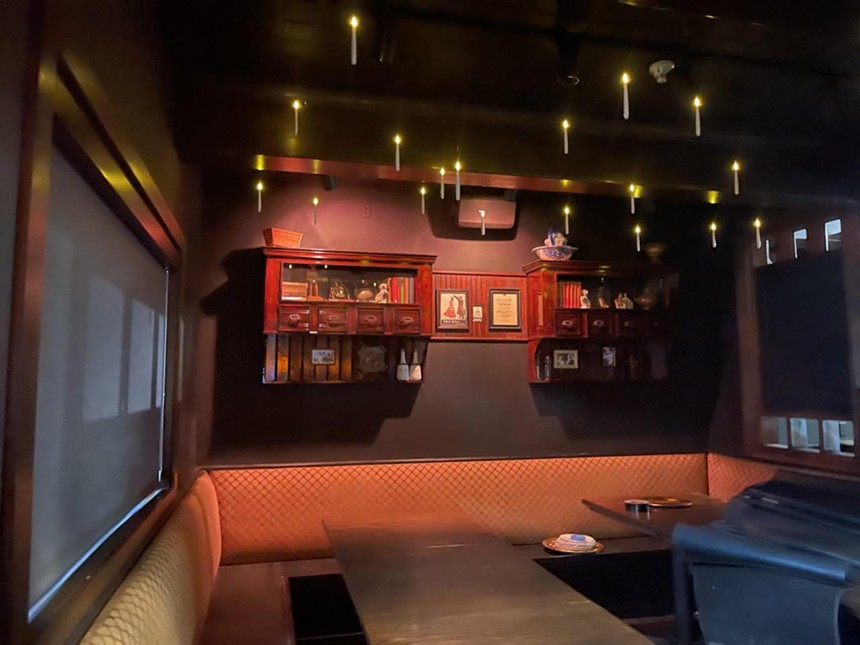 Telephone Pub occupies the former home of Baker Street..
Handsome Boys Hospitality
Telephone Pub, which is located in the middle of the Belmar Shopping District, is part of Lakewood's five-year plan to revitalize and rebrand its downtown, Schmitz says. The space is massive — 64,000 square feet and an outdoor patio complete with fireplace. "The place looks like a movie set," he notes. With a creative team led by Schmitz's sister-in-law, Michaela Schmitz, the design includes works from local artists Alex Geitman, Lucus Garcia and Luis Hayes.

Telephone Pub is an upscale gastropub with a beverage program created by general manager Josh Kruse, who was formerly with TAG Restaurant Group. Expect cocktails like the beet juice-infused gin-based Unicorn Blood and the Feather of Phoenix, a charcoal-infused mezcal cocktail. Overseeing the food is chef Richie Olbeda, who previously worked at the District and will be cooking up a menu heavy on English influences, with options like fish and chips and Guinness soup.

Although the pub has yet to secure its liquor license — Schmitz says that's still four months out — Lakewood Mayor Adam Paul has been proactive in helping the Handsome Boys team find other avenues to opening, Schmitz says. For now, Telephone Pub will operate under a special-events permit, and it has plans to partner with various nonprofits over the next few months. That's a good fit, since it's in Handsome Boys Hospitality's "DNA to give back," Schmitz notes.

Handsome Boys is also getting geared up to open RiNo Country Club at 3763 Wynkoop Street, with a liquor-license hearing slated for December 6. This concept calls for an indoor country-club bar, nine-hole putt-putt course and outdoor beer garden. That opening will be followed by Con Safos at 1416 Market Street, which will serve Mexican eats and drinks with a party atmosphere. "If I don't stay busy. I get in trouble," Schmitz says.

Telephone Pub is located at 7260 West Alaska Drive in Lakewood, and will be open from 4 p.m. to 2 a.m. on weekdays and noon to 2 a.m. on weekends. For more information, visit instagram.com/telephone_pub.