Colorado cannabis growers kept raising the bar this year as they competed to produce the best buds, yet we're the real winners. There have never been more talented growers in legal pot, and the flavors just keep expanding.

Picking our ten favorite strains of 2021 was like picking the best fried chicken sandwiches: There are simply too many to choose from. We burned through more than fifty strains this year; most of them were new, some were just new to us, and a few were classics that hadn't yet been properly shared with the world. Here's to finding all of these stanky, tasty weeds in 2022, and beyond. In the meantime, our ten best:

Roasted Garlic Margy
Roasted Garlic Margy's slow-cooked, salty qualities rekindled stoned memories of Veruca Salt chewing on a stick of gum that tasted like a full-course meal, only without the ballooning blue body. A mix of GMO and Frozen Margy from Colorado's own Cannarado Genetics, Roasted Garlic Margy's thick fumes of gas are virtually impossible to contain. However, breaking up the buds shows off salty, briny notes that are hard to bring out of cannabis. The high is stress-free and helps with upset stomachs, but is also extremely heavy on my eyes even when I stay mentally alert. So I keep Roasted Garlic Margy around for nighttime (and hangovers), and hope no one tries to FaceTime me.

Dragon Fruit
If Dragon Fruit yielded more or looked better, it might get the attention it deserves as a daytime option, but the strain is somewhat of an ugly duckling. Loose, long buds with heavy purple fan leaves and average trichome coverage aren't going to wow shoppers in today's market. If we had to shop blindfolded, though, Dragon Fruit would be a hot item. The potent smell — a mixture of citrus, tropical fruit and mandarin orange syrup — would make you think concentrated fruit juice had been poured into a weed jar, and the smoke is surprisingly close to that mark.

Jealousy
Although potent, spacy and heavy on the eyes, this Gelato #41 and Sherbet mixture doesn't drain my energy up front. The strain's heavyweight power is so serious that the first thirty minutes would be disorienting if anxiety were present, and I usually need a few minutes to find my bearings after sharing a joint. Luckily, Jealousy has proved effective at killing stress, too, so that potent high usually ends in the kitchen instead of the fetal position. Take your puffs slowly, and Jealousy is a superb evening strain after a long or tiring day, providing mental euphoria and physical relief on a dab-like level.

Blue Cheese
This strain isn't exactly new, but thanks to renewed interest from commercial growers and dispensaries, Blue Cheese is making a comeback in Colorado — and I couldn't be happier. The mix of Blueberry and U.K. Cheese is best kept for the end of the night, doubling as a dinner-party dessert and weighted blanket within the first hour. Such a simple, relaxing high and clear flavors have created a loyal following, but you'll rarely see shoppers lining up for the latest drop of Blue Cheese. Fine with me: That just means more for us cheeseheads. 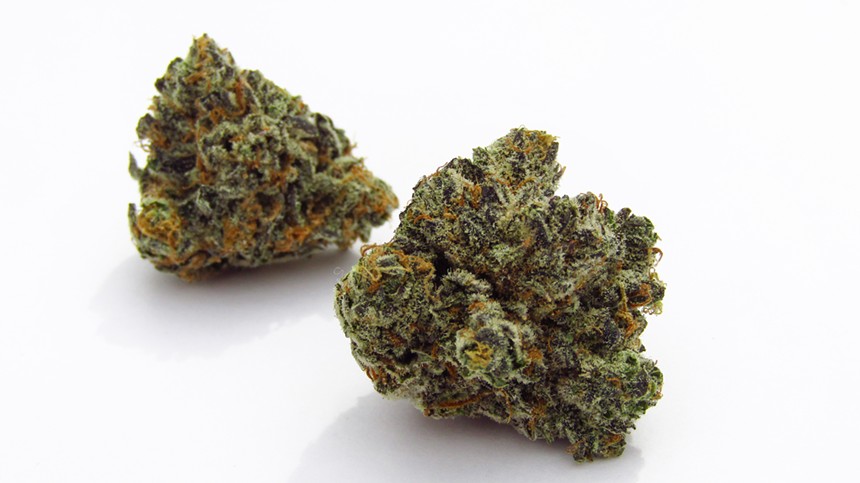 Blue Cheese is a winner.
Herbert Fuego
Cherry Cake
Cherry Cake's parents, Cherry Thunderfuck and NorCal Goo, aren't your typical commercial strains, bearing more Afghani and Haze-like qualities than I'd expected from a strain with "Cake" in the name. The smell was more spicy and earthy than anticipated, with some slightly sweet citrus characteristics, but nothing that smelled like cherries. I wasn't disappointed, though: Cherry Cake's flavor reminded me of a fruitier Bubba Kush or Chocolope, and the high was exactly as promised. A quick burst of euphoria left me interested and absorbed in anything in front of me. And while that apex is short and dangerous to chase, Cherry Cake's effects last throughout the day and keep a smile on my face.

Big Bubba Diesel
Sour Diesel and Bubba Kush carry reliable, outstanding — and opposite — effects and flavors. I was hoping for more of a draw or split decision in either strain's favor, with Big Bubba Diesel showcasing characteristics that made me fall in love with weed in the first place. I was pumped up on stoned enthusiasm and a lubed stomach for about an hour, easily giving the first few rounds to Sour Diesel. The energy left quickly, however, and the hunger stayed. I felt like a teenager who was four hours off his first joint, drooling, yawning and snacking through the day until nighttime arrived. Consider this a seventh-round upset for Bubba and a big win for Kush fans.

Oreoz
I've never seen Oreoz — a mix of Cookies and Cream and Secret Weapon — marked lower than 22 percent THC at a dispensary, and whether those numbers are true or not, they're an accurate reflection of the strain's knockout potential. My first bowl felt like a dab, and my eighth lasted a few days longer than usual. Such power can knock anyone out, but taking it slower made me more calm than tired. Smoking one bowl over the course of 25 minutes after work and exercise kept me loose and free of stress without draining my wit, and if I wanted to fall asleep early, two or three bowls always did the trick.

GMO Zkittlez
Using two pieces of fried chicken instead of bread for a bun. Signing Kevin Durant on the back of a 73-win season. The lineage of GMO Zkittlez is right up there with its GMO, OG Kush and Zkittlez background. Throwing three titans in the sandbox together is hardly surprising for the strain's breeder, Ethos Genetics. Neither was the clotheslining high from GMO Zkittlez, which spanks anyone foolish enough to try it before nighttime. Be ready for a nap — or a coma.

Waiting Game
Playing this waiting game sounded more appealing than texting my old street dealer, and it smelled a lot better than the mids of my earlier years, too. A mix of Fruity Pebbles OG and Miracle Alien Cookies (MAC) genetics will do that, but I shouldn't be surprised at Waiting Game's charm. The strain's breeder, Capulator, has created MAC and several popular variants, like Jungle MAC, MAC and Cheese and Banana MAC. Waiting Game's smell and flavor profile is sour, but not like a Diesel. Instead, my tastebuds notice a sugary, syrupy candy feeling, and the high is similarly invigorating. Even when I overdid it — which is easy to do, given the mounting effects — I was still relatively in control and productive, and never came close to an anxious freakout. A high worth waiting for, but even better when timed correctly.

Chem Squeezy
I was going to force a pun about my brain being squeezed dry of functionality after smoking this strain, a mix of Chemodo and Lemon Squeeze from Boulder's FreeWorld Genetics, but that would imply that remnants are left. In reality, my brain is transported to another dimension, and I can only pray it returns inside of three hours. For better or worse, that's what we've come to expect from most Chem strains, but a sweet spritz of lemon characteristics and healthier-looking buds give Chem Squeezy a little personality. If you gravitate toward gas and don't mind going down uncharted paths during your high, then Squeezy is worth all the commercial juice behind it.