Art Attack: Gallery Shows and Events in Denver This Weekend

Gallery shows are still leaning toward festive this week, though a few outliers are out there, too, making powerful statements through art. Meanwhile, book club-themed work, an art arcade and the beautiful practice of printmaker Taiko Chandler help keep things cheerful. Happy December!

Even pinball is artistic at Understudy!
Understudy Denver
ARTcade
Understudy, 890 C 14th Street
Now through January 30; Wednesdays through Sundays, noon to 8 p.m.
If you’re downtown checking out the holiday lights, don’t miss dropping in at the Denver Theatre District’s cozy arts incubator space, Understudy, for ARTcade. It has all the fixings of a traditional arcade — except that they’ve been souped up by a long list of participating local artists. Even the prizes are artist-made: Grab a masterpiece from a claw machine, or redeem coupons for enamel pins, coloring books, miniature paintings, jewelry, tea towels, art prints, small sculptures and more. ARTcade will be open through the end of January to accommodate Stock Show visitors, but note these two temporary closures: December 15-19 for convention center construction and December 24, 25 and 31. 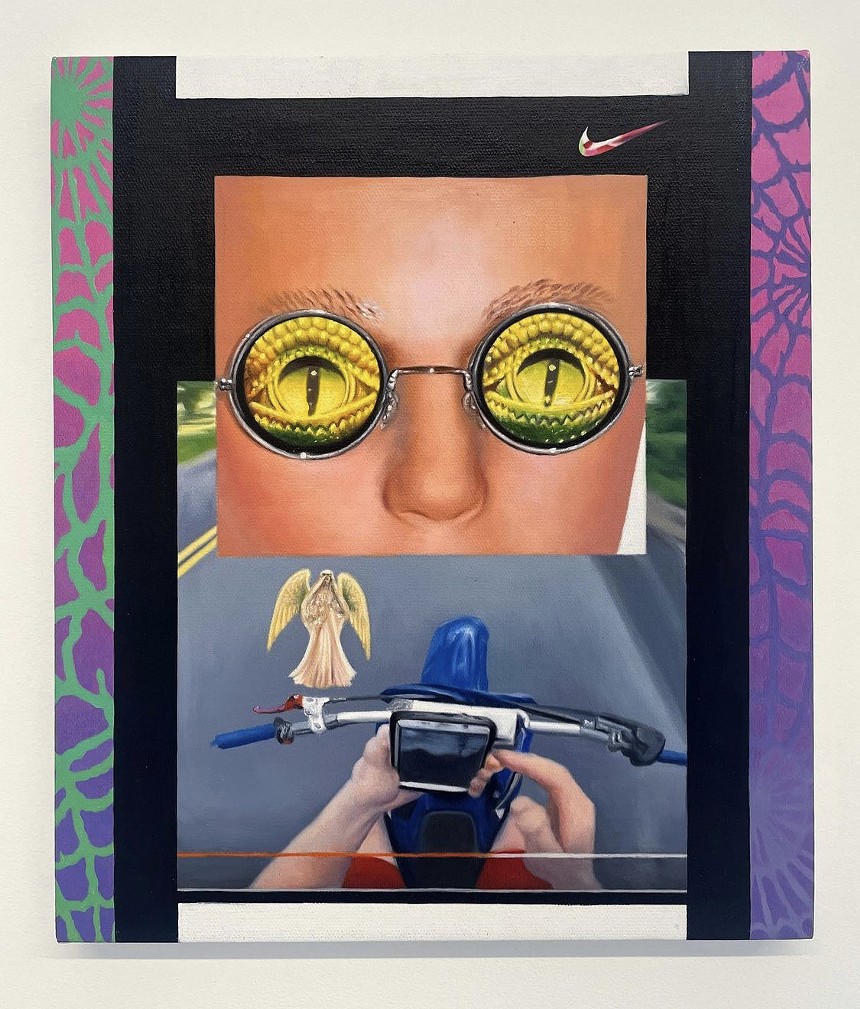 Dmitri Obergfell, “Web Presence,” 2021.
Dmitri Obergfell,
Dmitri Obergfell, Water the Earth With Your Tears
Friend of a Friend Gallery (FOAF), 1115 Acoma Street, Suite 321
Through January 16 (open by appointment)
Opening Reception: Saturday, December 11, 7 to 10 p.m.
Friend of a Friend, the nomadic project space now lodging at the Evans School, fêtes new work by Dmitri Obergfell addressing the power and influence of cultural icons both popular and traditional. Obergfell juggles these symbols to demonstrate how they can keep the masses under control through the constant consumption of imagery and ideas. 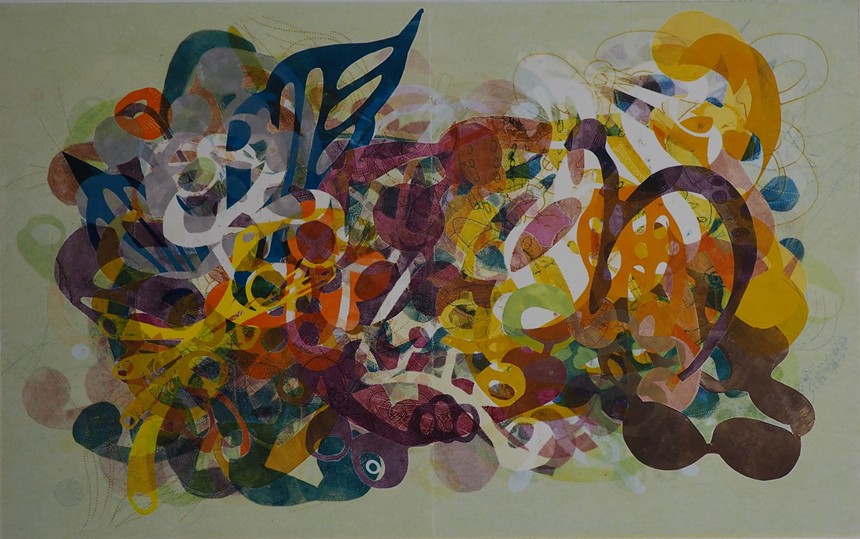 A collaborative artwork for charity consigned by Brett Matarazzo.
Courtesy of Brett Matarazzo
Brett Matarazzo, In Our Nature
BRDG Project, 1553 Platte Street
Through December 29
Opening Reception: Saturday, December 11, 6 to 10 p.m.
BRDG Project co-founder Brett Matarazzo consigned a long list of 24 local artists to take provided small laser-cut works he’d made and transform the nature-inspired shapes as they liked. The finished pieces will be sold for $200 each, with 100 percent of the proceeds going to WildEarth Guardians, a nonprofit supporting ecological protections. In addition, Matarazzo is mounting a show of his own, with a mixture of installation, new and retrospective works.

Johny Defeo, “Taos Adobe,” acrylic on panel.
Johny Defeo, Visions West Contemporary
Johnny Defeo, Soft Eye
Visions West Contemporary, 2605 Walnut Street
Through Friday, January 14
Johnny DeFeo’s Soft Eye is in part a paean to a sweet horse he bought in an online auction, while also addressing the landscape, history and buildings of the Southwest, as observed from his home in Taos, New Mexico. This representational view goes back eons to imagine the wild land where only untamed creatures roamed before it was overrun by human civilization.

Next Gallery member Adrienne DeLoe's insect assemblage is made from a real cicada specimen and fish bones.
Adrienne DeLoe
Winter Art Market
Next Gallery, Art Hub, 6851 West Colfax Avenue
Through January 2 (closed Christmas Day and New Year’s Day)
You have artsy friends, right? Next Gallery members will end 2021 with an all-gallery holiday art market representing the co-op’s stylistic diversity, and you’re bound to find a trove of gifts that suit every one of those buddies. We're sure we’re repeating ourselves here, but art makes a fabulous and personal gift.

Niza Knoll, “Kya and her Boat.”
Niza Knol
Where the Crawdads Sing
Niza Knoll Gallery, 915 Santa Fe Drive
Through January 22
When the members of a book club are also all artists, they could illustrate their reactions to a common read through imagery instead of words. That’s the sort of bounty you’ll find at Niza Knoll Gallery, where a group show of readers’ impressions of Where the Crawdads Sing, by Delia Owens, will be the gallery’s second literature-driven exhibition (the first was for Amor Towles’s A Gentleman in Moscow in 2019). Did you love the book? Chances are you’ll love this show. For further reference, see our story about the show.

and one last thing:

Dylan Scholinski GoFundMe
Denver artist Dylan Scholinski, a former RedLine resident artist and the longtime operator of Sent(a)Mental Studios, a one-man organization that fosters suicide prevention for the LGBTIQA community through art, has been through a hard stretch, losing a job he loved, grieving the loss of his mother and recovering from shoulder surgery. The last straw for Dylan, a sweet and trusting soul, has been falling for an art-collecting scam that ended up costing him $5,000. His friend, Emily Chaney, jumped into action to start a GoFundMe in his name if you’d like to help (donations here).

Interested in having your event appear in this calendar? Send the details to [email protected].