After a Quiet Open, Westbound & Down Brewing Has 'Em Lining Up in Lafayette

Westbound & Down Brewing
Westbound has a cool corner spot in Lafayette.
You'll have to forgive Jake Gardner if he repeatedly points out that Westbound & Down Brewing's new Lafayette location has a whopping eighteen different beers on tap. Because for months and months during the height of the pandemic, he was lucky to have eight at the brewery's original spot in Idaho Springs.

Like most every other brewery in the state, Westbound had to make a sudden shift to packaging in 2020 after the coronavirus took over, so when breweries, bars and restaurants were finally allowed to open again, he didn't have much beer left to serve. Finding a balance between cans and draft in the months that followed proved tricky as the up-and-down nature of the pandemic made planning difficult. Customer can look right into the brewhouse, and vice-versa.
Jonathan Shikes
"We were always a month and a half behind the regulations, but that was everyone's story during COVID," says Gardner, who is the head brewer and an operating partner for Westbound & Down.

But those needs are also what pushed the brewery to jump at the chance to open a second location — with a fancy new fifteen-barrel new brewhouse and a bigger canning line — in the former Endo Brewing space at 2755 Dagny Way in Lafayette. Which — again — has eighteen beers on tap, including six IPAs, four lagers, three stouts, barrel-aged offerings, a hefewiezen, and a handful of fruited sours. 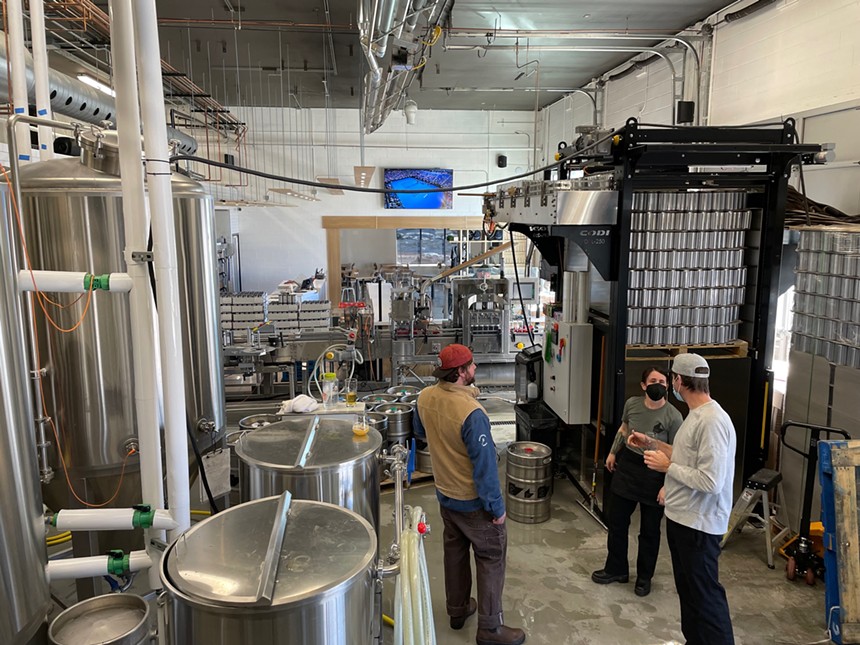 Westbound began canning more beer during the pandemic.
Jonathan Shikes
They're made on what Westbound brewer Derek Goodman calls "the Ferrari of brewing systems," which comes with bells and whistles that allow for automatic processes and are especially good at making hazy IPAs — which are some of the brewery's best sellers, despite its love for clear, West Coast IPAs. Even better, Goodman adds, is that he can stand the brewing deck and watch customers drink his beers.

But the beers are just the beginning.

Westbound Mill, as the location is called, opened quietly on December 20, 2021, dishing out both round and Detroit-style artisan pizzas made with beer in the sourdough crust (which is fermented for 48-72 hours) and toppings like Ezzo pepperoni from River Bear Meats, salsa verde, mozzarella and spicy honey. "We wanted to do something different," than the burgers, fries, sandwiches, nachos and chili that Westbound serves at the historic Buffalo Restaurant which is attached to the brewery in Idaho Springs, says head chef and general manager Casey Taylor.

People lined up to buy Western Justice.
Jonathan Shikes
With both its food and beer, Westbound doesn't just want to make something for the sake of making it, Gardner adds. "We want to contribute to the greater craft beer conversation." For instance, although Westbound is primarily known for its IPAs, it also helped pioneer a new wave of hoppier "Italian-style" pilsners in Colorado over the past two years. Westbound also spends as much time and effort brewing West Coast-style IPAs as it does on its hazies, which is unusual at the moment.

So far, those contributions are making Boulder County beer drinkers happy, and they've been turning out despite the fact that Westbound hasn't done much marketing or promotion so far. That's in part because the brewery is maintaining limited hours (3 to 9 p.m. daily) while it gets up to speed. It's also waiting on the completion of its two patios, which will be able to seat about forty people on nice days.

A Detroit-style pizza made with beer in the crust and in the sausage.
Jonathan Shikes
But it's also because of the Marshall Fire, which devastated parts of Lafayette and the surrounding area just a few days after Westbound opened. So, rather than promote the business, the brewery chose to pitch in, donating food and raising money for people who'd lost their homes.

Last weekend, though, the brewery hosted the release of Western Justice, an imperial stout aged in three kinds of whiskey barrels and then packaged in eight-ounce cans. And there was a line out the door for it.

"It felt like old school beer culture — lines, a full patio — and it made me excited about where we can go," says Westbound marketing director Eric Schmidt, adding that it feels good to be able to fill a space where people were already used to drinking craft beer. "People in Boulder County know their beer so well, so it has been really cool to have so many people come out. It feels good to be a part of it."