In the aftermath of a fatal shooting during New Year's celebrations at Cabin Tap House, the City of Denver has temporarily shuttered the LoDo nightclub.

"The disruptive and illegal activities associated with the licensed establishment have created an unsafe and hazardous condition, and the continued operation of the establishment in this manner would be a danger to the public health, welfare, and safety of the community. The Director finds that probable cause exists for revocation or suspension of the license," Molly Duplechian, deputy director of the Department of Excise and Licenses, wrote in a January 1 order of emergency suspension. Duplechian will take over as interim executive director of Excise and Licenses after current executive director Ashley Kilroy steps down on January 7.

The order means that Cabin must shut close immediately, at least for the time being.

"There will be an administrative public hearing in front of a Denver Hearing Officer, who will issue a recommended decision. That recommended decision, testimony, and evidence will be reviewed by the Executive Director of the Department of Excise and Licenses, who will then issue a final decision," says Eric Escudero, a spokesperson for Excise and Licenses. This is the first time that Excise and Licenses has issued an emergency suspension order since October 2016, when the department temporarily shut down the Cold Crush nightclub at 2700 Larimer Street following the fatal shooting of 29-year-old Aurora rapper Tyrone Adair Jr., aka Boss Goodie, outside the club.

On January 1, the Denver Police Department received a call at 1:14 a.m. reporting that there had been a shooting inside Cabin, which opened late last year at 1919 Blake Street. An adult male and an adult female were pronounced dead on the scene, and two adult males were wounded and transported to local hospitals. 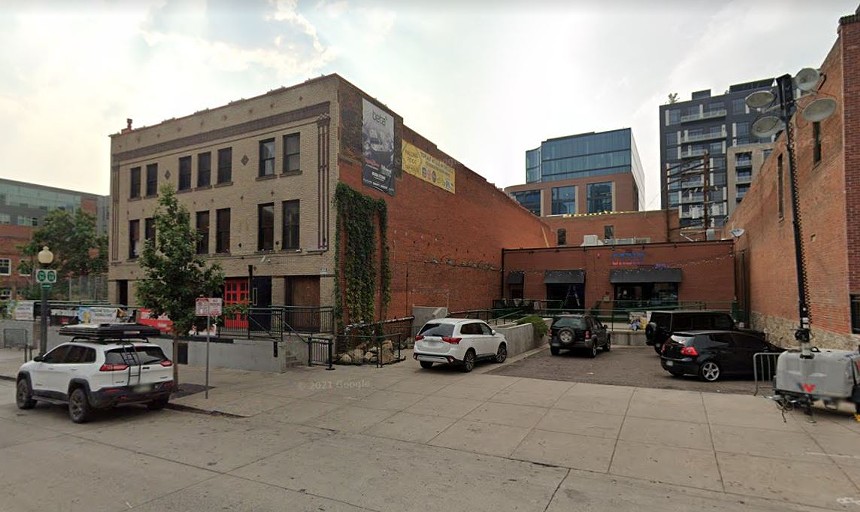 A New Year's party at Cabin ended in tragedy.
Google Maps
This past summer, Valentes Corleons, whose legal name is Hussam Kayali, bought the building that had housed Falling Rock Tap House for 24 years for $2.5 million and turned it into Cabin. He already owned the building next door at 1909 Blake, which is home to Beta Event Center, another property that's had trouble with the city.

The City of Denver has been trying to shut down Beta since August based on law and code violations, including hiring unlicensed security guards and allowing drinking after hours. Last month, a hearing officer hired by the city recommended that Excise and Licenses revoke Beta's liquor license — basing his decision, in large part, on the fact that Corleons told a Denver cop that he was a "made man" in the Mafia and the allegation that Corleons attempted to bribe another Denver cop to make the investigation of his venue go away.

Corleons contends that his introduction of himself as a made man wasn't a threat, and denies the attempted bribery allegation. The executive director of Excise and Licenses will rule soon on whether Beta will lose its liquor license.

But while the city nailed Beta on administrative issues, lawyers and police officers for Denver paint a picture of Beta as a venue that allows in gang members who then get into fights on the premises. Much of the increased violence in the 1900 block of Blake over the spring and summer of 2021 was attributable to Beta, these cops and lawyers asserted during administrative hearings over whether to remove the club's liquor license. And an undercover police detective who went into Beta in June as part of the city's investigation was able to enter the club with a handgun in her waistband, despite being patted down by staff at the entrance.

Aside from potentially stripping Beta's liquor license, the city is also trying to shut down the club through a public-nuisance filing. A hearing will take place related to that filing in Denver County Court on January 13.

The story of what happened at Cabin leading up to the shooting in the early morning hours of January 1 is still trickling out. 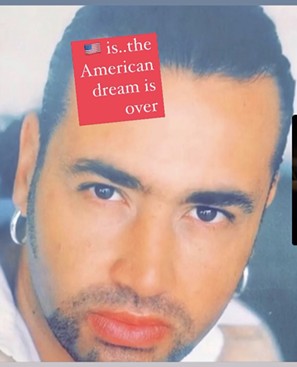 Valentes Corleons sent Westword this picture to describe his feelings about the city pushing to shut down his clubs.
Courtesy of Valentes Corleons
"One girl was dancing and one guy was walking with a drink," Corleons says of the two people who were shot and killed. "And the other guy, one was shot in the leg, the other guy was shot in the stomach. I know that there was some fight, but that had nothing to do with it. It was early, and he wasn't part of it."

A patron of Cabin posted a series of videos to Instagram showing a fight taking place at the club in which around a half-dozen men attacked a person not seen on camera. Another patron of Cabin says he saw another fight that precipitated the shooting. This patron, who asked to remain anonymous, also notes that he wasn't patted down or searched when he entered the club.

For the time being, Corleons has chosen to close Beta. And while he could reopen Cabin if he were able to win an administrative hearing, he says he's ready to permanently close both venues.

"I just, I can't do this," he says. "I'm going to make the neighborhood bad if we keep them open and have problem after problem. I think the only way to stop it is to just close it and for someone else to take over and turn it into an electronic club." Before Corleons took over Beta as sole owner in early 2020, the club was a world-renowned electronic dance music venue.

"I think the city is right. This is not good. And I'm just going to close it. I don't even have the passion to open anymore. There's lives being lost," Corleons adds. "I'm sorry. I didn't mean to harm anything. I didn't mean to bring problems. I'm just trying to live my dream, brother."

Corleons says he is interested in selling Beta back to its former owners, Brad Roulier and Mike McCray, who founded the venue in 2008. He adds that he was almost ready to close a deal to sell Cabin this month when the shooting occurred.