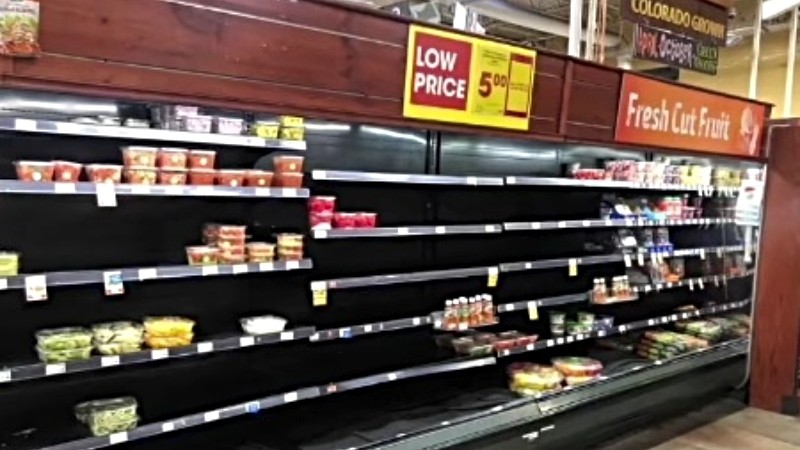 Three days of renewed talks between United Food and Commercial Workers Local 7 and Kroger-owned King Soopers about the ongoing strike against Colorado's largest grocery chain are now on the books, with another session slated to get underway at 3 p.m. today, January 17. The latest updates from the two sides, shared after 8 p.m. yesterday, are very different, however.

The King Soopers take actually uses the word "progress," albeit in the context of the admission that a quick solution is unlikely, while the UFCW Local 7 account is less optimistic.

The tone of the January 14 King Soopers release confirming the relaunch of negotiations was epitomized by its title: "King Soopers and City Market Receives Notice From UCFW Local 7 of Their Desire to Meet: UFCW Should Not Be a Roadblock to Wage Increases and Let Their Members Vote." Included were statements from King Soopers president Joe Kelley that portrayed Local 7 as the main impediment in the procedure. "The bottom line is that our associates have lost their voice and instead have been manipulated into striking over an alleged unfair labor practice charge," he said. "Their wage increases are being delayed and they have been denied their democratic right to vote on the real issue at hand — their contract."

The company's January 16 statement is much less bellicose: "King Soopers and City Market have negotiated with UFCW Local 7 all weekend and have agreed to meet tomorrow, for the fourth consecutive day," it pronounced. "Negotiations will resume tomorrow afternoon at 3 p.m. — when UFCW is available. The company is disappointed that the process is moving slowly but pleased that progress is being made. The King Soopers and City Market team will continue to make themselves available to come to an agreement that puts more money in their associates' paychecks."

The union's communications over the last day or so haven't been nearly so upbeat. Posted yesterday, for instance, was a TikTok video that includes images of a practically deserted King Soopers parking lot and store shelves nearly empty of items for purchase. And the most recent remarks by Kim Cordova, president of Local 7 and vice president of UFCW International, make no reference to forward momentum.

"After three consecutive days of negotiations, we have yet to reach an agreement that meets the demands of our members," Cordova said on January 16. "The company refuses to address the skyrocketing costs of living and documented food insecurity in Colorado by not paying essential grocery workers a living wage they deserve. For months, workers have demanded the company take their proposals seriously and have been met with deafening silence. Even after workers voted almost unanimously to walk off the job in response to King Soopers’ unfair labor practices, the company has still failed to take our demands seriously. A new agreement must ensure a safe place to work, which also means a safe place to shop."

Cordova stresses that at today's session, to be conducted at the Denver Marriott Tech Center outside the view of reporters, the union committee will "negotiate with the company in good faith for what our members deserve: an industry-leading contract." Meanwhile, she adds, “Our picket lines remain strong. Our members will continue to raise their voices and the strike will continue throughout the bargaining process. We remain committed to honoring our Local 7 members and essential grocery store workers across the country by ensuring they have the wages they need to support their families."

Here's a video of Cordova sharing her thoughts after day three: