Sarah Cowell
Ratio Beerworks opens its new taproom today.
Since its inception in 2014, Ratio Beerworks has been one of the most deliberate, forward-thinking breweries in Denver. Nothing it does has been haphazard or poorly planned. But on Friday, January 21, Ratio will open its big new brewing facility and second taproom a little before it's ready. And that's kinda punk rock.

That punk mentality is part of what makes Ratio special, along with its design ethos, its elevated events, its music industry connections and its beer. And all of those things are making the leap from the River North Art District, where Ratio will continue to operate its original taproom, to the Overland neighborhood, where it has taken over the former space operated by Declaration Brewing at 2030 South Cherokee Street. Sarah Cowell
"But we're not trying to make this into RiNo. This is Overland, and it's very different," says brewery co-founder Jason zumBrunnen, who has become a big fan of the south Denver neighborhood.

The taproom, on a mixed industrial-residential street, won't have the foot traffic — or the scooter traffic — that RiNo gets, but it will have locals, families, commuters and people who work nearby, not to mention residents of the enormous and soon-to-be-finished apartment complex across the street.

In addition, the taproom will offer some Ratio beers that are different from what's available at the RiNo location, and come spring, the enormous, 8,000-square-foot patio will be fully wired with its own sound system and decked out with a large fire pit, a detailed mural and a permanent food truck. Eventually, the brewery hopes to host concerts with up to 1,000 people outdoors, says Ratio marketing manager Marika Clark.

One interesting note: The new location has a fence built by local metalworking artist Charles Lefkowitz, who incorporated the appearance of sound waves into the design; the sound waves are from from the songs that Ratio's original five beers were named after. There are other narratives included in the fence as well, depending on whether you look at it from left to right or right to left. If you've been to Ratio's RiNo location, you will recognized the style, because Lefkowitz built a fence there, as well. 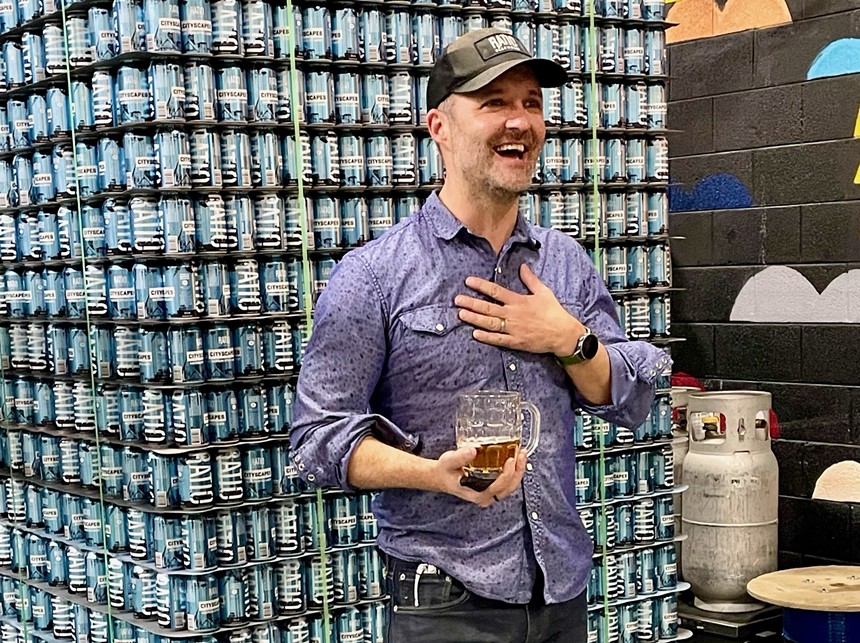 Jason zumBrunnen co-founded Ratio in 2016 with Scott Kaplan.
Jonathan Shikes
But the real change for Ratio will be behind the scenes. That's where a new production team will brew and can up to 50 percent more beer in 2022 than what the brewery cranked out in 2021 (about 4,200 barrels). To do that, Ratio has revamped Declaration's old twenty-barrel brewing system and added some of its own equipment, along with a Cody Manufacturing canning machine that can fill fifty cans per minute.

The expansion will allow the brewery to begin canning some of its year-round flagships in addition to seasonal releases and to grow its distribution up and down the Front Range and into the foothills.

That's quite a change from almost exactly two years ago — pre-pandemic — when Ratio had yet to put a single beer into a can and when the goal of opening a second location seemed a long way off.

But when the pandemic began in March 2020, Ratio, like many restaurants, bars and breweries, was forced to furlough a good portion of its staff since state restrictions didn't allow them to stay open for on-site eating or drinking. In order to stay alive, it quickly acquired a small canning system and proceeded to package six different beers over the next month so that customers could take them home to drink in quarantine. Sarah Cowell
To keep the packaging momentum going, Ratio began looking seriously for a production space, and it found the Cherokee Street building in January 2021, about a year after Declaration had filed for bankruptcy protection and closed its doors. Ratio announced the news a month later.

Over the next ten months, the brewery had to rebuild, adding staff back and changing its business model to incorporate cans — all while renovating the Cherokee Street building. It began brewing beer there in July 2021.

Now, as 2022 begins, zumBrunnen says, "This is the year of growth for us. For the first time, we have big actual move-forward plans."

Ratio will be open starting Friday, January 21, at noon, with multiple beers on tap and for sale in cans to go. The brewery plans to host a grand-opening party around its sixth anniversary on February 18.