Denver-based drag queen Samora Kash came out of the closet, literally, in March 2020. After years of toying with the idea of doing drag, an unforeseen hiatus at home was the impetus that Kash (aka Cameron Rogers) needed to create a drag persona. "I actually started drag in quarantine. I literally started it all in my closet, and it has led to where it is now," she says of her evolution.

The 28-year-old now regularly performs in shows around town and has a residency at Lucid — and on Saturday, January 29, she'll host the first-ever drag show at Denver's Marijuana Mansion. But she didn't jump into performing immediately.

Kash had been interested in drag ever since attending her first drag show, but never pursued the art form until COVID-19 isolation periods in 2020 presented the opportunity to practice privately.

"I saw my first drag show when I was eighteen," she recalls. "I was a theater kid growing up, so it was so intriguing to me, but it was just never really the right timing. So when quarantine happened, it was like, 'Well, it's now or never.'"

She spent the rest of her time in lockdown honing the skills to become a drag performer. When live performances were happening again, she wanted to be ready for the stage, even creating a social media page to get her new persona out there.

"It was a lot of practice for myself. I didn't really have a direction with it," Kash says. "I just knew it was something I wanted to do, for sure."

In spring of 2021, Kash performed in her very first live drag show at Charlie's. She introduced herself to Denver's drag scene with high-octane performances, elevated streetwear-inspired looks and an undying love for Beyoncé, whose work ethic is a big inspiration. That drive is essential, as Kash often conjures her favorite ideas when most of the world is asleep.

"I'm kind of a night owl, so I pull a lot of inspiration from late-night thoughts. I've always been a person who, my mind is always going. I have ideas after ideas, and I think my best thoughts come to me late at night. My mind is on overdrive a lot of the time," Kash says. 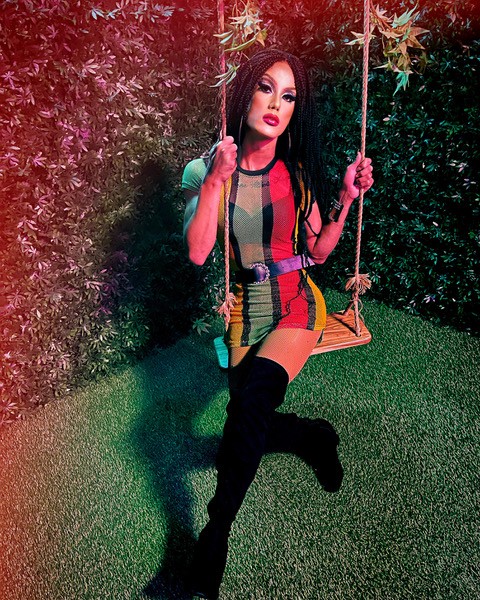 Kash grew up in Knoxville, Tennessee, but has lived in Denver for four years.
Marijuana Mansion
Kash's nocturnal spurts of creativity used to frequently coincide with her late-night smoke sessions. Though she is no longer a cannabis consumer because of her day job, she still counts cannabis among her muses. "I actually don't smoke anymore — fun fact. But I was a very big consumer once upon a time. I used to pull a lot of ideas from the times I would smoke, and I think creativity a lot of times comes from smoking," she says.

While doing a photo shoot at the Marijuana Mansion, a colorful and popular spot for events and photo taking, Kash thought the setting was a nice fit for a drag show. The Mansion eventually agreed, and the two parties created Chronic: High on Heelz, a mix of burlesque, comedy and drag performances.

Kash knew exactly who she wanted to share the stage with her in the early stages of conceptualizing the show: "I had a vision from the beginning to do this with Jessica L'Whor, who is a good friend of mine, [as well as] Coco Bardot, and then Lulu Alnite. Just because I know we mesh so well together, we have such a good time, no matter what we're doing," she explains, adding that another performer, LaLa, will join the show, also.

There may be some cannabis-themed numbers, but Kash gave the queens free rein to perform whatever they choose, expecting outstanding performances regardless. "We all bring that high-energy performance. I want people to have fun, and I want people to see this isn't just drag queens who decided to get together and throw a party in a mansion," she says.

All of the queens in the Chronic cast are close friends of Kash's.
Marijuana Mansion

Visitors should expect an interactive show with a fun history lesson about the Marijuana Mansion's haunted past — but with an element of drag "that maybe wouldn't have drag normally," Kash says. As a biracial queen, creating new inclusive spaces for queer people, especially queer people of color, is an important personal element of her shows.

"Being a biracial drag queen, with Black and white parents, I want to create spaces for the Black community in ways that aren't always easy. I want the shows I produce to reflect depth, equality in all forms, and to always make space for everyone, no matter what you look like, what you identify as, or who your background says you are," she emphasizes.

Kash hopes that the drag shows will become a monthly fixture at the Marijuana Mansion and, if the mansion ever becomes licensed for marijuana hospitality by the City of Denver, to permit cannabis use, as well.