Mark Antonation
Owlbear has consistently made some of Denver's best barbecue.
The hits just keep coming in 2022, and we're not even a month into the new year. The latest loss: Owlbear Barbecue, at 2826 Larimer Street, which will be open January 23, and then close for good. "It was a long time coming," says owner Karl Fallenius. "It was a hard decision to come to, but the biggest issue was food cost."

While Owlbear's barbecue is popular and considered by many — including Westword — to be the best in the city, Fallenius struggled to still offer a high-quality product while juggling rising costs on everything from meat to to-go containers. "As we've been doing okay, everything's been getting more expensive," he explains. "In terms of sales, we were having some of the best ever, but in terms of what we were spending, we weren't really making any money."

I first tried Owlbear in 2016, when it was serving out of a temporary outdoor setup at Finn's Manor in RiNo. Our big group ordered a bit of everything on the menu, digging into trays of smoked meats and sides. And then I had a bite of the pastrami: The tender, thick-cut, smoked meat was perfectly spiced, and brought me to a new level of barbecue appreciation.

Fallenius began smoking meats while he was living in Austin, Texas, and worked at the world-famous Franklin Barbecue before moving to Denver and opening Owlbear (named for a monster in the Dungeons & Dragons role-playing game) at Finn's in 2015.

But cooking outdoors was a tough sell during the cold winter months, so in 2017, after gaining a lot of fans, Fallenius closed down with plans to open a brick-and-mortar across the street. 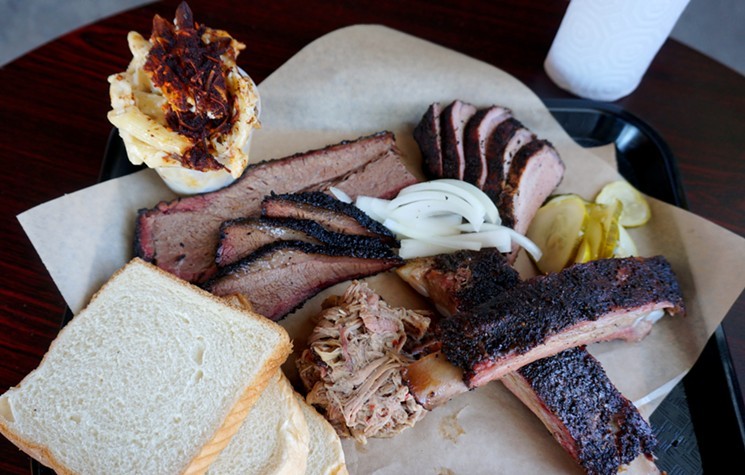 Mark Antonation
Getting the proper permits from the city for his outdoor cooking setup, which used two hand-built smokers made from empty 500-gallon propane tanks, proved difficult, though. While the new restaurant remained a work in progress, Fallenius satiated Denver's cravings for his ’cue at a handful of pop-ups. Then in February 2018, Owlbear took another hit: Two masked criminals stole the door off one of the smokers. Because it was custom-built, getting a replacement took months. "It was always something," Fallenius says of the process of opening and running a restaurant.

Owlbear rose again, though, finally opening in May 2019. But then came the pandemic, and because Owlbear hadn't been open for all of 2019, the business wasn't eligible for as much assistance through PPP loans and the Restaurant Revitalization Fund as it would have been if it had been open longer. "We were in a really good spot before COVID hit, but it was like this huge switch flipped and never really flipped back," he says.

During the early days of the pandemic, Fallenius opted to keep the operation pick-up only, even after indoor dining was allowed to return, citing concern for the safety of his staff. He also started doing more frequent specials, getting creative with options like hearty gumbo, blood sausage and a cheeseburger made with ground brisket trimmings and Fallenius's brisket rub that was smoked for 45 minutes.

But constantly pivoting, trying new things and dealing with shortages and rising costs took a toll on Fallenius's mental health and left him feeling burned out. Sourcing has been a particularly hard struggle — even the brisket company that Owlbear originally used went out of business during the pandemic. "I think we're really starting to see the full effect of COVID on the restaurant industry now," Fallenius says.

"I love Owlbear," he concludes, "but I'm looking forward to not being stressed all the time."