Phamaly Theater Company
Auditions and callbacks were held for Chicago January 2019.
Colorado filmmaker Brian Malone was sitting in a banquet hall at Columbia University one January evening in 2019 when he reached a creative impasse. Malone was part of a team being honored with a duPont-Columbia Award for "Imminent Danger," an episode of the Rocky Mountain PBS program Insight with John Ferrugia; the ceremony would also award sixteen other documentary films, television shows and podcasts, including a mini-series by the inimitable Ken Burns.

While Burns gave his acceptance speech, Malone came to the realization that he could not complete his next project, which had already begun shooting, without the help of a co-director. He pulled out his cellphone and texted Regan Linton, a subject of the new project, and asked her to become his co-captain.

"I can't do this honestly if you don't do it with me," he wrote. Linton agreed to join the project.

The resulting documentary, Imperfect, chronicles the making of Phamaly Theatre's 2019 production of Chicago, which Linton directed. Although she was a performer with a strong theater background, it was her first time directing a musical. It would also premiere during Phamaly's thirtieth season, so it needed to be something of a showstopper to commemorate the anniversary of this Denver troupe. All this would have been enough to make for an engaging documentary on its own, but Phamaly is not just any ordinary theater company: It's comprised entirely of performers with disabilities

Imperfect, which premiered at the 2021 Denver Film Festival, covers nine months in just 78 minutes, from the production's inception to curtain call to a surprising epilogue. Two days of general auditions and subsequent callbacks led to a cast of 24; Imperfect follows the exploits of seven individuals, including Linton. Over the course of the film, romances form and break between ensemble members, actors deal with the struggles of being a performer with a day job, and lead actor Megan McGuire (who plays Roxie Hart) relocates from a farm to the big city — a classic protagonist journey.

Linton was hands-off when it came to filming, as she was solely committed to Chicago. But when post-production began, she found herself facing her "documentary character." Her theatrical training was paramount to separating herself from her filmed image in order to make decisions as a filmmaker. Linton "has a built-in story acumen," Malone says, which helped smooth the editing process. 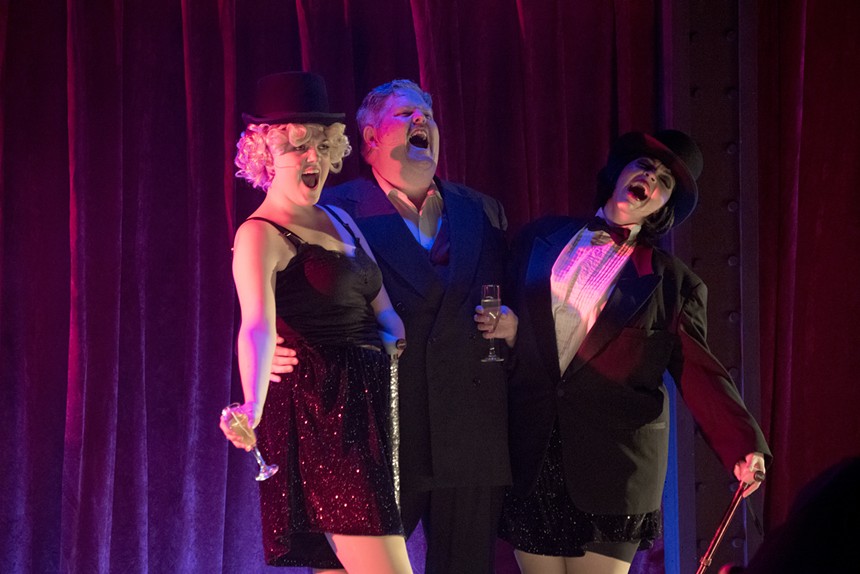 From left to right: Megan McGuire, Mark Dissette, Erin Schneider in the 2019 production of Chicago.
Phamaly Theater Company
Still, the duo had eighty hours of film to sift through to make the final product. They joke that a ten-part mini-series might have been easier to craft from their footage.

Malone and Linton approached editing with the notion that the storytelling was paramount and should never be compromised. Linton's goal was to amplify representation of disabled people by creating a film that was not "overly saccharine [and did] not fall into traps or tropes of how the disability community is often represented," she recalls.

This pledge took on many forms, including a lack of soundtrack. Moments of emotional breakdowns and sensory overloads were used to depict the characters honestly, without a protective barrier of background music. When McGuire cannot overcome the thought that she was mistakenly cast in such a demanding role, Linton reminds her that "we are mistakes." Linton knows the power that humanization and bluntness can serve.

The film immediately spotlights Linton's lower body paralysis and how it dictates her morning routine. During the opening scene, she posts herself in a wheelchair, moves around various bathroom aide devices to take a shower, then loads her van and heads into Denver. In spite of these gateway moments, Imperfect manages to never feel like a documentary simply about people with disabilities. Some of the cast briefly discuss their disabilities, invisible or visible, but most make light of their situations. In fact, some of these jokes are even written into Chicago, with McGuire calling out her missing left hand to thunderous laughter from the audience.

Almost nothing about Imperfect plays into the viewer's hands. Malone says he specifically tried to never "spoon-feed" the audience emotions or opinions. "Collaborative interdependence was important," Linton adds. "Everyone could bring what they're good at and make a good film, while still acknowledging each person's limits."

As Linton points out, she and Malone didn't set out to make a film about disability. But Imperfect achieves an authentic representation of a group of people rarely portrayed genuinely, while at the same time revolutionizing a played-out plot about behind-the-scenes production.

Imperfect is available to screen virtually through Sunday, February 6 through the Slamdance Film Festival; visit the festival's website for passes. Learn more about Phamaly Theatre on its website.