Hear the Best of Denver Rap at ReSrface's Bars at Bazaar

Jesse Santana
Jesse Santana, aka ReSrface, is a Denver native currently based in Aurora.
In anticipation of his upcoming show Bars at Bazaar, 24-year-old Jesse Santana (aka rapper ReSrface) feels like he's getting ready to throw a big house party. He's got a stylish venue secured, he's got an incredible lineup of music, and now all he needs is an energetic crowd to complete the atmosphere. Like any good host, Santana's number-one priority is that everyone who attends enjoys themselves.

"I just want this to be a very positive experience, where everybody has a good time, and [make it] kind of like a party," he says. "I'm just hoping for a good turnout and a good result. I feel like a host, like maybe I should make some pizza rolls."

If you want to be part of the party, be sure to join Santana, along with artists Riaga, JaSew and Rev. da IV, for a night of good music and good vibes at Enigma Bazaar on Saturday, February 26.

With more than six years of experience in the Denver area rap scene (and a spot on our list of ten of the best rappers in Denver), Santana is no stranger to live performances. But Bars at Bazaar will be the first show that he's produced by himself from start to finish.

"This is the first show that I've ever got to really have any control or creative say in in any way. I'm very excited about that," he says. "That's what I live for, is to be able to create something in my way. There's a lot of convolution, especially in music, in the rap industry. A lot of it is money-driven. A lot of it is for the wrong reasons, but I really just wanted to do a show where everybody is having a good time and all the artists get paid for what they do."

Riaga will co-headline Bars at Bazaar.
L8gacy
Drawing from his own experiences as a performer, Santana envisioned creating an event that was more artist-friendly than other concerts he'd been a part of in the past. It was important for him to make sure that the other participating artists would be compensated fairly for their efforts. "I wanted it to be more commission-based, like if you sell forty tickets, you get the income on all forty tickets. A lot of times it's not like that," he explains. "You'll do a show with a promoter who makes you sell a minimum amount of tickets, and you never see any overhead on that. Or, I mean, there's been times where you literally have to pay to perform. It sucks, especially for artists who are first starting out."

Tired of the red tape and venue politics that often prevent newer artists from being booked, Santana is thrilled to be able to host an event where artists and attendees alike can relax, connect and share in each other's joy.

"This is going to be, I would guess, my most emotional performance. It's going to mean a lot to me. There's going to be a lot of family members there, a lot of friends there, and everybody who's coming out to the show, whether I know them as an artist or producer or writer, I consider anybody who's ever shown me any positivity a friend," says Santana. "And I would like to show them positivity, too. I want this to just be like, 'We rented out this venue, here's a party, and here's some music, too. And here's some art, too. And here's some food, too, if you want.' I want it to be all-encompassing." Food will be available from Xatrucho, a food concept by Chef Edwin Sandoval located within Enigma Bazaar, and artists Ryyse Creations and Tyler Paulk will have art on display and for sale.

Rev. da IV has a voice that you have to hear to believe.
Sergio Noé
Enigma Bazaar, a "mystical bar and arts venue" that opened last fall in Berkeley, was the perfect spot for Santana to bring his vision to life. Welcoming artists of all mediums, Enigma Bazaar frequently hosts open-stage nights, open-mic nights, drag shows, comedy shows and even opera singers and tarot readings. Santana found the eclectic venue through his friend Kevin Hernandez, a photographer who goes by the name L8gacy (and who will handle the photography and videography at Bars at Bazaar).

Hernandez invited Santana to join him and his friend, musical artist Riaga, for an open-mic night at the venue. "A month goes by, and I'm like, 'Hey, Kevin, do they still do that open mic?' So we go, and we also got Riaga, who I'm co-headlining with," Santana says. "It was a great time."

Riaga and Santana both performed at the open mic that night, catching the attention of Enigma co-founder Carly Ament and tech manager Garrison York. "It's funny — we came to each other, essentially. I told Riaga as soon as we walked in the building, 'This would be the perfect place to do a show.' I was telling him and Kevin, 'After this, I'm going to talk to them about doing a show.' And they came up to us. It was just a perfect moment," Santana says. "I think they appreciated what we did with our open mics, and they appreciated the fact that we came, and even though we were performing for a minimal amount of people, I think it was apparent that both me and Riaga have been doing this for a while. The respect was mutual, and we had a good conversation that night — for a couple hours, honestly."

Santana wanted Bars at Bazaar to be a mutually beneficial partnership for both himself and Enigma Bazaar, especially since the bar is still fairly new to Denver. "It's kind of an 'I scratch your back, you scratch mine' type of deal, because they're a small establishment that's trying to boost the spotlight on their business. So if we can bring in seventy people in one night, imagine the sales they do on that one night versus what they usually do, since it's kind of a lower-traffic bar for now because they're just starting," he explains.

Enigma Bazaar is a magical music and arts venue on West 38th Avenue.
Jesse Santana
Initially, Santana and Riaga planned to co-headline the show with just the two of them. "And then I was thinking, 'Well, we could do that, or we could make it an entire function and bring four artists and have a whole lineup of performers,'" Santana says.

Enigma Bazaar was the perfect size, since it was big enough that they could bring in a few more artists, but still small enough that they would be able to fill the venue. "The lineup came from wanting to expand it out a little bit. I knew I wanted to get my friend JaSew on there, because we've been friends for quite some time, and I respect his art a lot. We've performed together before; I've known him since high school. I was thinking, 'Okay, Riaga, you find an artist and I'll find an artist,'" says Santana. Riaga suggested Greeley-based vocal powerhouse Rev. da IV, whom, coincidentally, Santana had just met. "Riaga hit me up and was like, 'Let's add Rev.' And I was like, 'Hell, yeah! I just saw Rev.'" The four artists will each bring their own blend of hip-hop, rap, R&B and soul to the stage.

Because Santana wanted to keep the focus on the artists and venue, he wanted to limit the number of sponsors involved with this event. "Fortunately, this venue was small enough to not have an egregious fee. I didn't want too many sponsors there — it's a smaller show, and I wanted it to be artist-centric. We as artists are a brand, and I want our brands to be the number-one thing, and I want Enigma Bazaar on that same level," he says. However, he did secure one major sponsorship, from Veritas Fine Cannabis, a high-end cannabis brand based in Colorado. "They're going to be a shoutout throughout the night. There will be QR codes and promotional elements, but I don't want it to be in your face and taking away from the artists too much. Maybe some giveaways, maybe some merch — whatever we can wrestle up."

Santana is encouraging all of the artists to bring any merch they have, as well, since he wants them to be able to further their individual brands. Riaga will have some pieces to preview from his clothing line, Oh Look! It's the Gang, coming out this summer. Santana also has some unique ideas for what he wants to bring: His plan is to raid a thrift store for clothing and other items to repurpose and customize as merch with his name and logo. 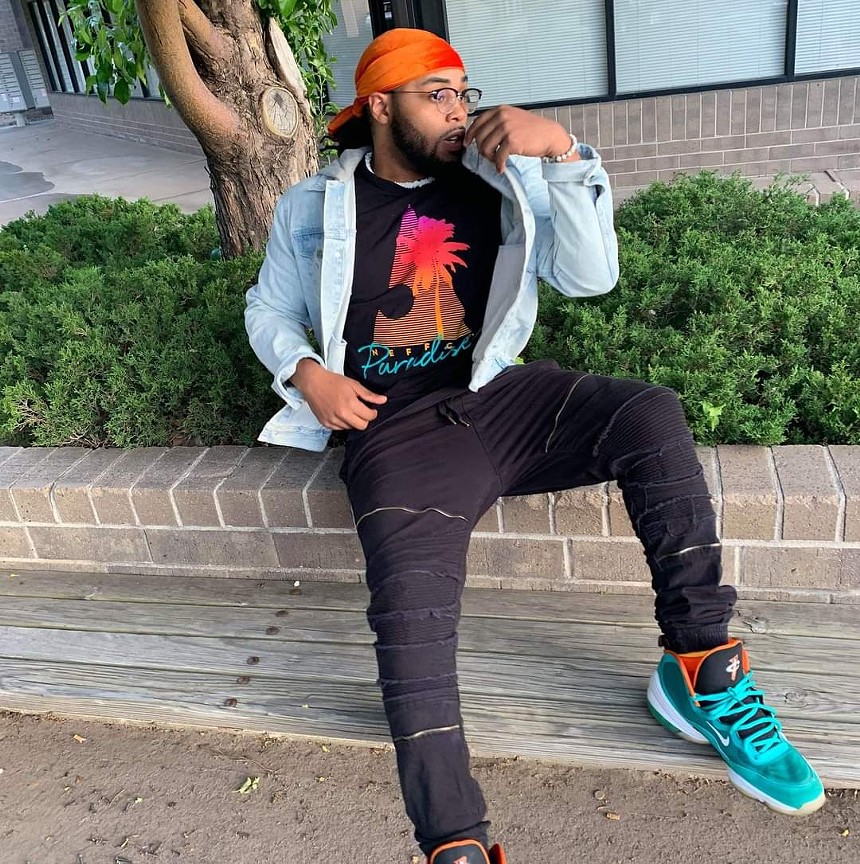 Rapper JaSew has been friends with Santana since they were in high school.
Courtesy of JaSew
After putting together Bars at Bazaar, Santana wants to keep producing his own shows, but only if he can find a way to balance it with making music. "I would love to keep doing events. I think there is a certain level of losing yourself in the business aspect of the music industry, though," he says. "What I'm currently finding is, I have music ready to go that I love, but I can't find the time to put it out right now. I'm trying to make fliers for the show, I'm trying to make videos for the show, I'm trying to make things come together."

He admits that releasing a song would be great promotion, but as a perfectionist, he never wants to rush to put something out if he can't give it his full attention. Ultimately, he wants to be able to keep doing what he loves most. "My thing is, I'm an artist at heart, so I don't want to do a show like this and not perform. Being on stage, there's nothing like it. If someone was like, 'You could be rich forever making music business moves, or you could be a struggling, decent artist who gets to perform every month,' I would pick the second one every time," he says. "I don't want to lose that part of the music industry, because the music is what I love."