Kush Alumni Wants You to Dress Like a Boss, Then Party With Rick Ross 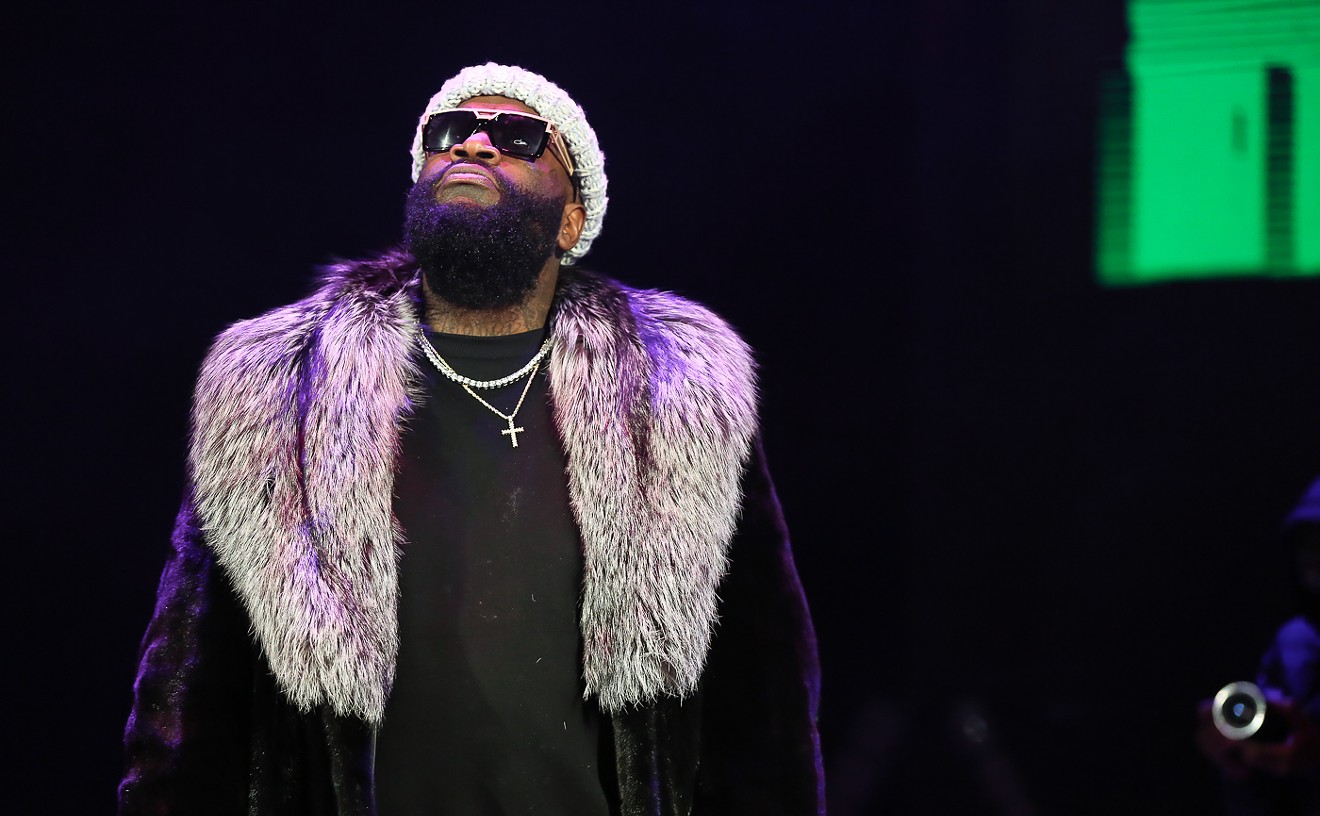 Brandon Marshall
Rick Ross is taking a break from the second leg of his Legendz of the Streetz tour to come party in Denver for a night.
Eric Harris (known by some as Banks), the 33-year-old owner and founder of brand and entertainment company Kush Alumni, has been involved in event production and promotion since before he could even legally get into a club.

"I've been doing promotion and marketing for around seventeen years now," Harris says. "I got into it due to my family members — my brother Lionheart from Memphis, Tennessee, and my cousin Killer Mike, who's located in Atlanta. Just different people that I was associated with throughout growing up that made me want to get into entertainment."

Over the years, Harris has built a network of insider connections across the music, art, fashion and cannabis industries, and he's putting those contacts to use to bring Denver an all-day fashion and music extravaganza on Sunday, February 20. By day, the event will be the Life of Fashion, a runway show highlighting local designers and brands. But by that night, Harris and Kush Alumni will have transformed the venue, ReelWorks, for an epic concert headlined by the one and only Rick Ross.

By the time Harris entered the entertainment industry as a teenager, his older brother and cousin had already made a name for themselves, giving him a significant head start. He quickly realized that with his web of industry connections, he could do a lot more than just party at the hottest clubs. He founded Kush Alumni in Memphis, as well as 719 to 303 Promotions, which he built with his father. Harris came to Colorado to bring the energy of the "Dirty South" to an untapped market, he says. He wanted to see what he could do with a true blank slate, so rather than starting in Denver, he chose to kick things off in Colorado Springs. But before long, Kush Alumni expanded to Denver, and it now has a yearly roster of signature events in both cities. "We are the owners of the Trap and Paint event that we do in Denver and the Springs," he notes. "We also are the ones who do the Black Party every year, we do the White Splash Party in Colorado Springs — so a lot of things we do are yearly events now. It's built up to the level where we can produce a Rick Ross show for Denver, bigger things like that."

When conceptualizing the Life of Fashion, Harris wanted to offer urban streetwear designers an alternative platform to Denver Fashion Week. He had done one combined fashion show and concert in 2018 at Summit and was ready to revisit the idea.

"As a promoter and marketer, I travel to different states, and I didn't want Colorado and Denver to keep producing fashion shows for urban wear or streetwear that are really not up to the standard of, like, Denver Fashion Week," he explains. "When people do Denver Fashion Week, everyone wants to go all-out and get into it, but...it's very tight-knit now due to the longevity of it. I want to bring more of a fun vibe, as far as the music, people moving around, models walking the runway not so stiff — they can have fun on the runway."

Harris aims to create a more entertaining and inclusive atmosphere than at Denver Fashion Week, but with the same level of hype. "That's the ultimate goal," he says, "making an environment for a fashion show that can bring in all brands, not just a particular brand." To distinguish the Life of Fashion from ordinary fashion shows, there will be performances by Jay Triiiple, Troy Good and Sanaa Raelyn during the show, as well as tunes spun by DJ Simone Says and KDJ Above.

Eric Harris (right) has been throwing events in Colorado for over six years.
85 Studios
The designers on the runway at Life of Fashion are designers who may not conform to Denver Fashion Week's traditions, and that's exactly what Harris intended.

"Overall, it's a lot of urban wear, streetwear, even winter gear: skiing stuff, glasses, equipment," he says. "A lot of different people don't get the chance to show their product, either because they don't know how or some of the platforms are so stuck in their ways, they're not allowing new people to show their product. They'd just rather stay consistent with what they know. And there's nothing wrong with that, but when you have a community of all demographics from around the world, some avenues should be open for everybody."

The runway show, hosted by Milk Chris and Maria Loreto from The Session, will include items from the brands GoGang, Everything Charizma, Living Our Reality, King of the 303, 5 Points Apparel, My Generation T's, Debonair Streetwear, Get Busy Livin, Cold World and Lavish Queens Fabrics, many of which are Black-owned and based in Colorado. Harris wanted to focus on local brands in particular, so he could potentially introduce them to repeat customers. He has high hopes for the companies participating, he says: "It's to draw the revenue and their client base to them. Our goals are to grow their company brand by at least 50 percent revenue after doing the fashion show with us."

Just as the Life of Fashion is not your typical fashion show, the Rick Ross concert afterward will not be your typical concert.

"Most concerts that you see in Denver are just basically stand-up concerts, going to the bar, waiting on the artist to perform, the artist performs — that's it. This concert is different," Harris promises. "There will be things to interact with, not just standing in one spot looking crazy the whole night. We'll be giving away shots through the night, giving away bottles. It'll be a lot of activity going on so people don't feel like, 'Oh, this is boring — I'm going to be standing up for three hours just waiting for the artist to come on stage.'"

In addition to Rick Ross, there's a jam-packed lineup of some of Denver's finest performers, including AP, A Meazy, Mo-Luv and Tana 10 Birdz, who'll keep the party going strong between the fashion show and concert. "We'll have a cocktail hour in between with DJs playing, bars will be open, we'll have a 360-degree photo booth, the experience will be amazing," Harris says. "So if you have a ticket to both, you don't have to leave at all. And if you have VIP tickets, we actually have a VIP experience in the upper sky-bar level."

ReelWorks Denver will host the Life of Fashion show, as well as the Rick Ross concert.
ReelWorks Denver
What do you wear to an event like this? Harris has some suggestions. "Attendees should just look presentable. The reason I say that is, Denver is such a hard market to control with the dressing. They're so used to being lax with the dressing," he says with a laugh. "There's not a strict dress code like suit and tie or anything like that, because it's a concert, but we are telling people to come looking correct. Casual, presentable, something that you'd want to wear out. And no gang attire. Due to the fact that we're bringing Rick Ross, you should want to come stunting, you should want to look on par."

Show up, show out and get ready for a wild night with one of the most iconic names in rap.