Call Her Malinalli: Museo Takes a Contemporary Look at La Malinche in Response to DAM

Courtesy Museo de las Americas
"Ixchel," by Quintin Gonzalez.
La Malinche and her resounding impact on world history went unnoticed for centuries, but now three Denver exhibits are devoted to the historical figure…and duking it out over which one knows her best.

Malinche was a Nahua woman enslaved by the Spanish conquistador Hernán Cortés and used as his translator (among other things) during his conquest of the Aztec people. She and Cortés had a child, and she is widely seen as the mother of the mestizos, a mixed race of European and Indigenous descent. But for that reason, she has also been considered a conspirator, and her name mutated into the pejorative term "malinchista," meaning traitor. In the ’90s, though, Chicano artists in a counter-colonialism movement began illustrating Malinche as more of a victim of her time; she has now evolved into an icon of Mexican feminism.

La Malinche: Traitor, Survivor, Icon, which opened at the Denver Art Museum last month, examines how her image has shifted through the centuries toward a more sympathetic perspective, using works from the sixteenth century to the modern era, including pieces by 21 Chicano artists.

Maruca Salazar, former director of Museo de Las Americas, heard about the DAM's plans early on, and was disappointed that more space wasn't being given to current Chicano artists' takes on La Malinche. "My thought was, 'Where is the opportunity for contemporary, post-modern Latinx and Chicano artists?' Because we have to get with it," she says. "We know that those masters have already been recognized and have been used and are icons of Latinx and Chicano art. But where is the opportunity for the new generation of thinkers and creators?”

She also recognized that the thoughts of modern Chicano artists wouldn't necessarily be reflected in the upcoming collaboration between the Latino Cultural Arts Center and the DAM, Malintzin: Unraveled and Rewoven, which will display an iconic tapestry about the conquest in the Next Stage Gallery at the Denver Performing Arts Complex.

So Salazar decided to come out of retirement and curate her own exhibit, and talked about it with the Museo's current director, Claudia Moran, with whom Salazar had worked for almost a decade. The result, Malinalli on the Rocks, opens Thursday, March 17, at the Museo. 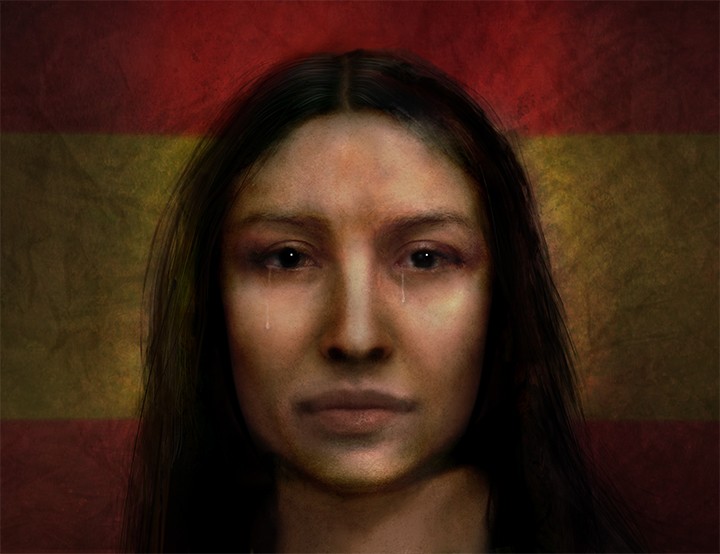 "Who Is She, Is She This or That?," by Carlos Frésquez.
Courtesy Museo de las Americas
Rather than include past Eurocentric views of Malinche, the Museo’s exhibit has narrowed its scope to contemporary art from thirteen local Latinx and Chicano artists. Salazar wanted to showcase only current artists, to amplify just how much the view of Malinche has changed within the realm of her own people and culture. “To me, I’m always thinking locally, and I’m always thinking that we have to celebrate what we have,” she says. “And what we have is some incredible, incredible talent.”

That's not to say that Salazar considers La Malinche a failure. “The exhibit at the Denver Art Museum is a very complete, well-put-together, very scholarly exhibition,” she says. “Anybody can be very proud of it, because [they are] doing the right thing.”

But it took the DAM a while to get to this point, Salazar adds. She's still bristling from an encounter with former DAM curator Dianne Vanderlip at a Chicano art event at the Arvada Center in the ’80s, where she says Vanderlip told her: "There is no such thing as Chicano art."

Still, Salazar points out that the enslaved woman, whose Indigenous name was Malinalli, was given the name Malinche by a priest during the conquest, while other names, such as Doña Marina, were labels that the Spaniards applied. “I chose Malinalli, because I wanted to make this an opportunity to look at the wonderful and the richest influences of the Indigenous culture, and I also wanted to make a point about conquered people,” she explains. “The whole aspect of this exhibit is to look into what is a mestizo — a mixed race. Because she is the mother of all the mestizos, she is the mother of all the conquered people. So you have to take it from that perspective and then allow people to do their own interpretations."

The artists in Malinalli on the Rocks confront their subject in myriad mediums, but a common theme is humor, which Salazar identifies as a hallmark of Chicano art. “The humor is what saves a lot of the sadness that comes with really, truly looking at yourself,” she says.

Daniel Salazar has taken images from the Florentine Codex, a sixteenth-century account of the conquest, and satirized them. In a depiction of the first meeting between Cortés and Aztec emperor Montezuma, with Malinche standing in between, Cortés is flipped the bird rather than welcomed with an extended hand. In another piece titled “The Vaxxers,” he depicts people with chicken pox, referencing the disease brought to Indigenous people by Europeans, with one woman saying, “You should be wearing a mask.”

“Those are very gentle but swift and powerful punches given to tradition,” Maruca Salazar says. 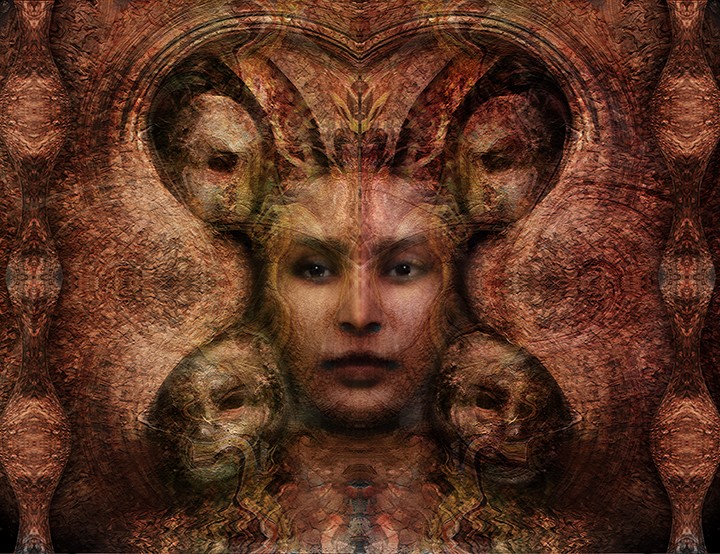 "Cosmica," by Quintin Gonzalez.
Courtesy Museo de las Americas
Every artist produced three to four works for the exhibit, and most are substantial in size. Delilah Montoya, who's also in the DAM’s Malinche exhibit, made a piece that comedically reflects the evangelism that swept Mexico during the Spanish conquest. It is a girl receiving First Communion, but with an unmistakably mischievous look on her face.

Carlos Frésquez, whom Salazar describes as "one of the most renowned Chicanos in the state and nationally," has printed fifteen digital photographs representing Malinche that he's pasted like "Wanted" posters, illustrating how she was criminalized. Quintin Gonzalez also went the tech route, with three stunning digital paintings of Malinche that depict her as a psychedelic goddess dripping with fractals, which emphasize her widespread impact on world history.

Maruca Salazar made a piece of her own for the show titled “Discarded.” Huipils, the traditional dress of an Aztec woman that Salazar sourced from the Museo’s collection, are stacked in a disheveled pile. “Five years after the conquest, all Indigenous women and men were required to wear European tailored clothing,” Salazar notes.

One artist who was selected for the exhibit isn't in the show: Alicia Cardenas. The muralist and tattoo artist was shot to death in late December. The exhibit is now dedicated to Cardenas, who was a major activist in championing Chicano artwork.

Chicanos have had to fight for their place in Denver's arts scene, Salazar says, and she thinks there's still progress to be made.

“This exhibition is a response to what Chicano art can be. Whether it is aesthetically pleasing to untrained eyes, or whether it is too overwhelming because you don’t have the cultural background — that is no longer relevant,” Salazar says. “Black Lives Matter changed all of that, and the museums need to adjust. The new generation is not going to be silenced anymore.”