knus.com
Peter Boyles at a 2015 event.
KNUS morning talk-show host Peter Boyles, who's been a staple of Denver radio for decades, took to the airwaves this morning, March 21, to announce his retirement.

"Everything has a beginning and a middle and an end," he said. "And I see an end coming."

The vacationing Boyles called in to 710 AM at 9 a.m., during the transition point between his regular Monday-through-Friday morning-drive production and the start of the one-hour long show hosted by George Brauchler, the former 18th Judicial District Attorney. In speaking with Brauchler, who has been filling in for Boyles, he quickly confirmed information that had leaked out over the weekend and provided details about what motivated his decision.

"The business has changed, and it's okay," he allowed at one point. But he also chalked up the choice to "put the gun down and back slowly away" because of health concerns. Boyles said he'd suffered what he alternately described as a recent "event" and a "mini-stroke" while on the air. "All of a sudden, I started speaking in tongues for about five minutes," he recalled. Longtime producer Bill Thorpe, whom Boyles praised repeatedly during his remarks, covered up the episode as best he could, and afterward, the host was taken to the Medical Center of Aurora.

Physicians at the hospital, whom Boyles also went out of his way to praise, found no obvious repercussions from the event. But to Boyles, who's about to turn 79, it was "a kind of warning shot. Perhaps one goes by your ear." After lengthy consideration, he determined that "maybe it's time to do some other things and give some other guys a chance."

"Peter Boyles on Being the Most Dangerous Man on Denver Radio," an interview published by Westword in July 2017, offers a detailed rundown of his career. In the piece, Boyles dubbed himself "a Pittsburgh kid from a union family" who "worked in the mill as a kid. And when I started to read, I found myself drawn to people like William Jennings Bryan and the so-called Prairie Populists who mistrusted and distrusted the railroads and the big banks and American foreign policy. Without realizing it, I was headed in that direction." 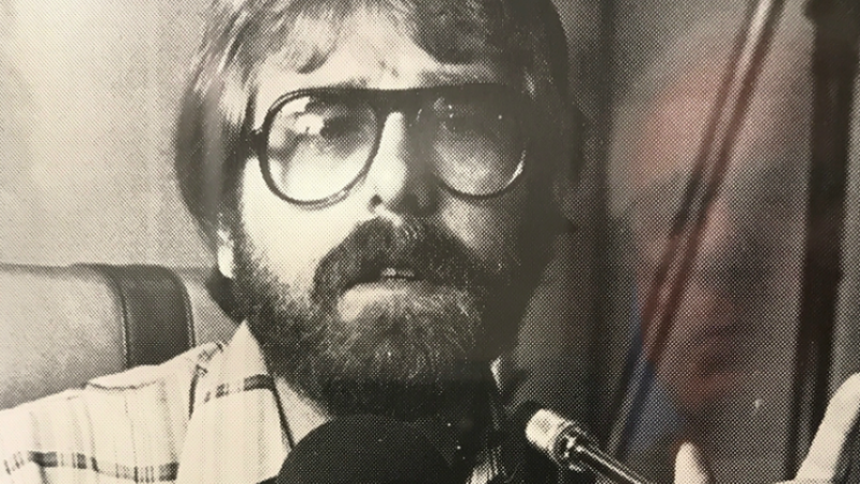 A photo of the younger Peter Boyles on the air — and yes, that's a reflection of Boyles circa 2017 at the right of the frame.
knus.com
Along the way, he picked up a distrust of politicians and powerful officials. "These people aren't really on your side, and I've thought about that quite a bit doing radio shows and doing some writing," he said at the time. "These guys really aren't on your side. They just pretend to be for the time being."

Boyles first hit the Denver airwaves in the early 1970s; over the years that followed, he worked as a traffic reporter, disc jockey and talk-radio host. He also bounced from station to station, serving stints at long-gone signals (KAAT, KLAK, KWBZ and KYBG) and some that survived, including KOA.There he grew close to talk-show host Alan Berg, who was murdered by a white nationalist group called the Order in 1984. Boyles spiraled after Berg's death, but two years later, he was able to overcome a raging substance-abuse problem, and he's now been clean for more than three decades.

In 1994, Boyles landed at KHOW, where he held down the morning-drive slot for nineteen years and became known for his obsessive focus on topics such as the JonBenét Ramsey case. In 2013, station management fired him after he got into an argument with producer Greg Hollenback that turned physical; Boyles admits to having grabbed Hollenback by a lanyard around his neck. However, he was promptly hired by KNUS, where he's continued to make friends and enemies in almost equal measure.

Once a liberal, Boyles began a philosophical shift in the late 1980s and subsequently landed at a point that's decidedly right of center. As a result, critics have branded him a hater for, among other things, his hard-line positions on immigration. But he's still capable of swimming against the tide. One example: Even as some of his fellow KNUS hosts were pushing debunked conspiracy theories, Boyles insisted that Joe Biden had defeated Donald Trump in the 2020 presidential election — and took plenty of heat from listeners for doing so.

During his March 21 conversation with Brauchler, Boyles confirmed that a five-hour going-away show is planned for 5 to 10 a.m. Friday, April 1, at the ViewHouse in Centennial and will feature plenty of special guests; one he mentioned was ex-KOA yakker Mike Rosen. He also insisted that he's not about to do a Tom Brady and un-retire after saying that he would be leaving the field, referencing boxers who stayed too long in the ring.

"I remember the old-timers saying, 'When the time comes, you'll know it,'" he told Brauchler, and while Boyles said that he's likely to take part in listener events and other special gigs related to KNUS down the line, he'll no longer have to "get up in the middle of the night and drive through a snowstorm to go to work."