Colorado's War on Fentanyl, and How It Could Go Wrong

leg.colorado.gov/dea.gov
Alec Garnett, speaker of the Colorado House of Representatives, started selling the fentanyl bill before it was formally introduced.
A new bill intended to address the rise of fentanyl in Colorado has yet to be formally introduced. But the politics surrounding it have gotten ugly fast, with law enforcement officials and other critics arguing that the measure isn't punitive enough, even as two leading reform organizations contend that a get-tough approach will do little to stem the recent rash of overdose deaths linked to the synthetic opioid.

Typically, lawmakers wait to talk about legislation until a completed document is available for public viewing. But given the furor over fentanyl, a group led by Speaker of the House Alec Garnett decided to pitch the proposal early, sitting down March 23 with various representatives of the mainstream media, including the Denver Post, Colorado Politics and Colorado Public Radio.

The Post summarized the plan by way of the following bullet points:

The bill isn't expected to jack up penalties for possessing a small amount of fentanyl — a decision that suggests Garnett and other legislators are trying to appear responsive to the current situation without casting blame for the increasing body count on HB19-1263, a bill that addressed fentanyl in the context of the broader drug scene; it passed in 2019 with backing from Democrats and a substantial number of Republicans.

With a few exceptions, the law "makes possession of 4 grams or less of a controlled substance listed in schedule I or II a level 1 drug misdemeanor" — a crime punishable by "up to 180 days in the county jail or 2 years probation, with up to 180 days in jail as a condition of, or for a violation of, probation." In addition, "the community substance use and mental health services grant program is established in the department of local affairs to provide grants to counties that provide substance use or mental health treatment services to, facilitate diversion programs for, or develop other strategies to reduce jail and prison bed use by persons who come into contact with the criminal justice system. A county is eligible to receive a grant if it provides such treatment services and programs in collaboration with public health agencies, law enforcement agencies, and community-based organizations."

The demonizing of HB19-1263 is already part of the fentanyl fight, as witnessed by a multi-debate challenge from Tyler Allcorn, a Republican candidate for a seat in the new 8th Congressional District, to Democratic frontrunner Yadira Caraveo, who voted for it. And conservative outfit Compass Colorado's response to reporting about the Garnett proposal boasts this line: "The bill will not include harsher punishments for simple possession of fentanyl, despite arguments over a controversial 2019 law that downgraded the charges for small amounts of most drugs to a misdemeanor."

Colorado Attorney General Phil Weiser, a Democrat, doesn't quite echo that sentiment in his statement about the coming bill; for the most part, he praises the effort. But he also gently maintains that more needs to be done. "The latest version of the bill draft is a major step forward to address the fentanyl crisis, and I urge the legislature to act on this opportunity and to build on it," he says. "As I’ve stated before, the legislature must take a hard look at the penalties for those who possess enough pure fentanyl to kill hundreds or thousands of people." 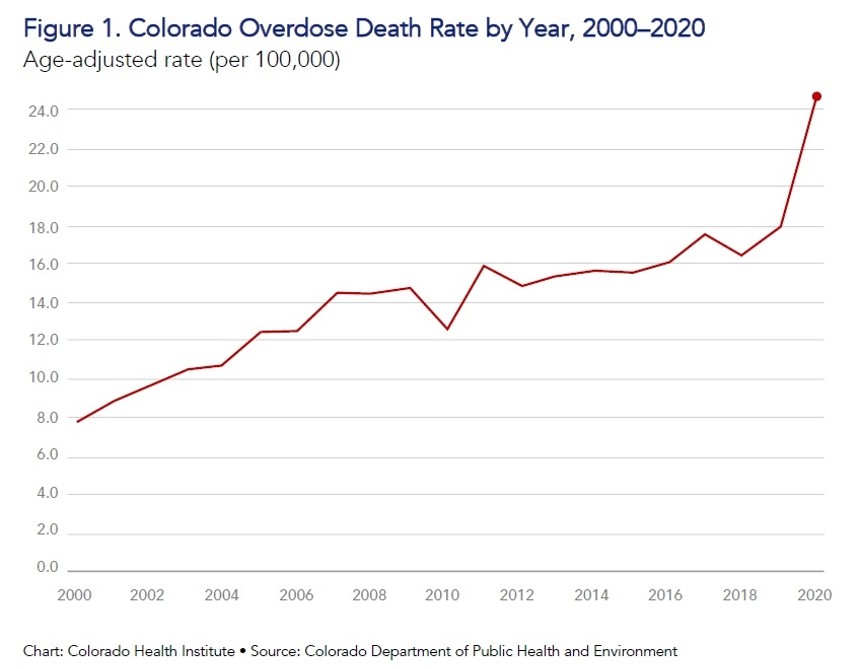 This graphic demonstrates that overdose deaths were rising in Colorado long before a controversial 2019 bill became law.
Harm Reduction Action Center/Colorado Criminal Justice Reform Coalition
Problem is, the substance is currently being added to so many other drugs that users may possess it without their knowledge, as was the case with five people who died in the same Commerce City house in February; they'd used cocaine that turned out to have been laced with fentanyl. According to Lisa Raville of Denver's Harm Reduction Action Center, fentanyl testing strips of the sort touted by Garnett have nearly outlived their usefulness; HRAC has supplied the strips since 2018 "so people can test their drugs before they use. But we probably won't be giving out the strips in the next six months, because everything will have fentanyl in it."

Raville was at the center of Westword's recent three-part series on fentanyl: "Fentanyl and Other Drugs Killing the Most Coloradans," "Why Denver Heroin Users Are Switching to Fentanyl," and "Synthetic Drugs More Powerful Than Fentanyl Coming to Denver, Expert Predicts." Her call for addressing the fentanyl crisis as a public-health issue, as opposed to embarking on another failed war on drugs, also underpins a special brief prepared for the legislature by the Harm Reduction Action Center in conjunction with the Colorado Criminal Justice Reform Coalition.

The brief attempts to debunk myths about fentanyl by way of simple questions and answers like these:

No. There is no systematic empirical evidence that DIH prosecutions slow the sale of illegal drugs, according to the Northeastern University School of Law’s Health in Justice Action Lab. "DIH prosecutions discourage witnesses to overdoses from calling 911 for fear that they will be arrested and charged with DIH or other serious crimes."

Will increasing criminal penalties for fentanyl distribution reduce the supply of fentanyl in the community?

No. Incarcerating drug dealers has little or no impact on disrupting drug supplies because the drug market is dynamic. It responds to the demand for drugs by replacing imprisoned sellers with either new recruits or increased drug selling by existing dealers, which is known as the "replacement effect."

HRAC and CCJRC offer multiple recommendations about how to improve the situation, including "Increase access to Naloxone, which reverses opioid overdoses and saves lives," "Strategically focus federal stimulus dollars towards drug prevention, harm reduction, treatment, and recovery services that have been proven to save people’s lives, including treatment on demand," "Expand the Good Samaritan law to include the crime of 'drug sharing,'" "Increase the number of harm reduction organizations and mobile outreach services with syringe access and engagement with people who use drugs," and "Support realistic, evidence-based programs to educate teens about drugs and harm reduction."

Will any of these items make the final version of the bill? We'll know when it's officially introduced, and that should be soon: Governor Jared Polis will be joined by Garnett and others at a gathering focusing on fentanyl scheduled for 10:30 a.m. today, March 24, at the Colorado State Capitol.

In the meantime, click to read the "Fentanyl in Colorado Special Brief" from the Harm Reduction Action Center and the Colorado Criminal Justice Reform Coalition.