Molly Martin
"Raise Hell Eat Well" is the Grub Gremlin motto.
"We wanted to bring the Poodle to more people," says Wes Moralez, co-owner of the Brutal Poodle, a heavy-metal bar and restaurant at 1967 South Broadway. Through the pandemic dine-in closures, Moralez was able to keep his entire staff employed, transitioning bartenders and servers to phone dispatch and delivery drivers. "We had a ton of support with to-go and delivery when we were shut down," he recalls. "So coming out of that, when everything reopened, we had a surge of business because we kept everything going."

That boost in business led to some brainstorming over the question "How can we spread our name without having to open another brick-and-mortar because it's just not the time right now?" Moralez explains of the process that led to Grub Gremlin, the food truck that Brutal Poodle will launch on Friday, April 15, at a grand-opening party at the Electric Cure (5350 West 25th Avenue in Edgewater) from 7 p.m. to 2 a.m.

"We stumbled across a buddy who had to close their business because of the pandemic. ... They gave us a great price," Moralez says. The truck, formerly Turn-In BBQ, was purchased last June, but Moralez took his time designing the concept and finding the right person, Connor Fox, to help him run it. Coming up with the name was easier, playing off the alliterative monikers that the Brutal Poodle likes to use for its menu specials. "I thought about the imagery that there could be. How cool would it be to have this demon that drives around Denver?" Moralez recalls thinking. 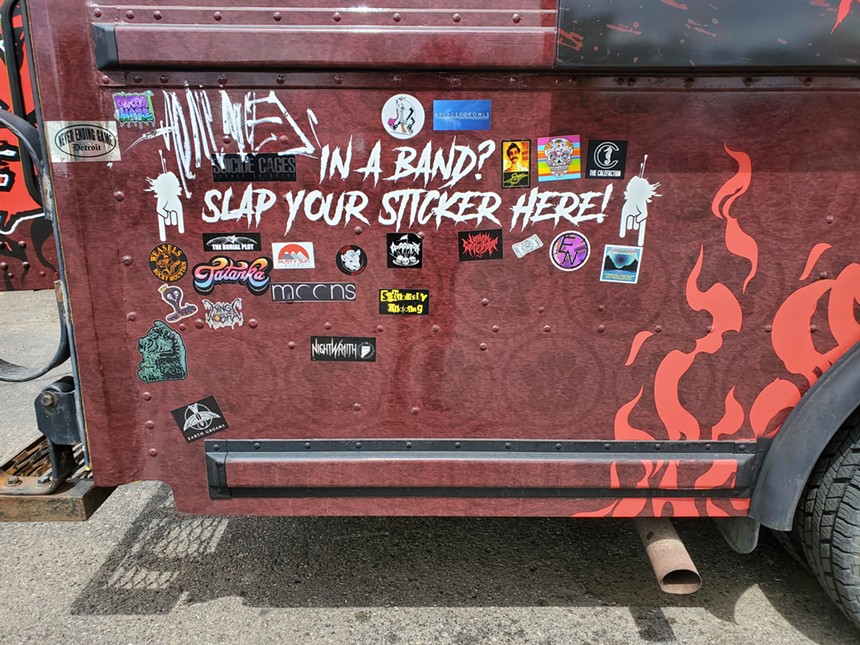 Once the band sticker area on the truck gets filled, it'll be removed for display and replaced with a new blank area to collect stickers.
Molly Martin
He designed the assets for the truck's wrap himself, and it was installed by Denver-based Pureblind. "It definitely brings out our branding throughout," Moralez says, including faint "paw-tagrams" in the background. "We really wanted to encompass everything we do here, as far as keeping this whimsical feel to the metal, punk and hardcore world, but also bringing our awesome food to that truck."

The truck's menu is similar to what's offered at the Brutal Poodle, but amended to fit in the confines of a smaller, mobile space. It will also include more vegan and vegetarian options. Fox, who will be running the truck, is vegan, and "that's really one thing I've wanted to broaden our horizons with," Moralez notes.

The lineup includes Brutal sliders (which can be made with a Beyond patty) and CFH ("Cluckers From Hell") sliders. There are also several plays on mac and cheese, among them a Brutal Poodle favorite topped with Flaming Hot Cheetos, a vegan version made with plant-based cheese and Takis, and a play on cheeseburger mac called Cheesemurder Mac that can also be made vegan. "Totally stoner food," Moralez notes.

Two other Brutal Poodle favorites round out the menu: loaded Burial Tots and Justice for All Eggrolls, along with a vegan egg roll called a Kerregg! Roll, served with a ginger-yaki sauce. There will also be vegan-friendly fried Hardcoreos made with a flaxseed batter and served with jalapeño raspberry jam. 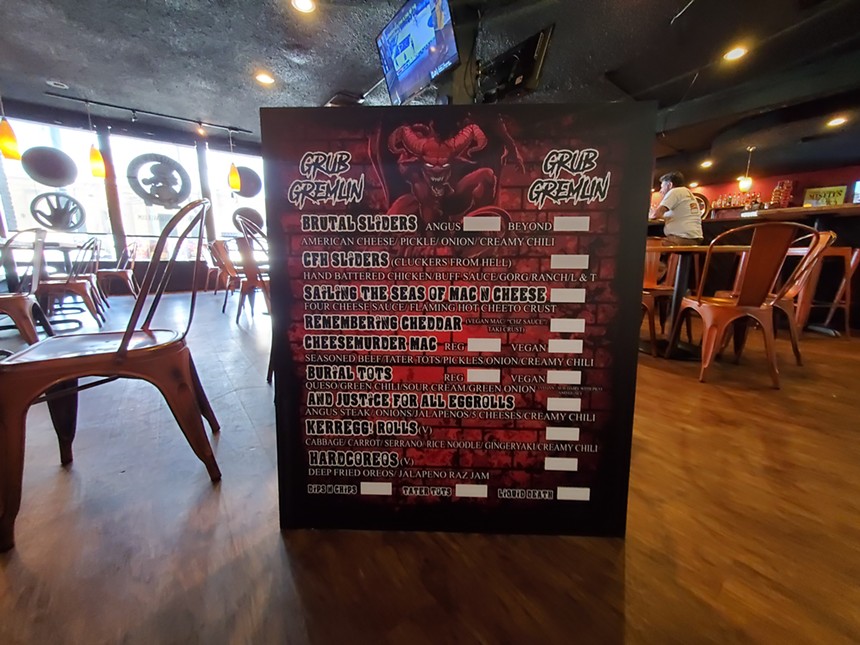 The menu for Grub Gremlin is an extension of what's offered at the Brutal Poodle.
Molly Martin
"When it came to choosing a place for our grand opening, we thought it was perfect," Moralez says of the Electric Cure, a tiki bar that doesn't shy away from the strange and unusual. (The Electric Cure is also hosting a zombie Jesus drag show on Easter Sunday.)

The truck will be making more appearances at that bar in the future. You'll also be able to find it at the Ratio Beerworks Overland taproom on Tuesdays and its RiNo taproom every other Wednesday for comedy night starting at the end of May.

On May 4, Grub Gremlin will be parked outside of the Odgen Theatre for the Behemoth, Arch Enemy, Napalm Death and Unto Others show. The Brutal Poodle has enjoyed a long partnership with AEG, helping to promote its events; Moralez says he's excited to extend that relationship, adding that Grub Gremlin will be making more appearances at AEG venues this summer.

The truck is also available for private events, which can be booked via email at [email protected].